Anyone else suddenly getting intruder alerts when the system is disarmed? I’ve just gotten home from work and the system disarmed (hooray for presence sensors being operational again after their three week holiday)… Imagine my surprise when my disarmed system turned all my lights red and send me a text message and push notification to say I’ve got an intruder…

I’ve rebooted the smart hub, I’ve manually arm/disarmed the smart home monitor, but doesn’t seem to have made a difference.

So now I’m faced with being home from nights, having three dogs which roam, and needing to sleep at the same time as needing to keep my phone on… I’m going to be getting intruder alerts every time one if the dogs walks past the pir!

I had the same occur on sunday. I have just installed my fortrezz siren so am checking that my house is disarmed before I open the front door.

funny thing was there were two police vans parked in front of my house when I triggered the alarm. they didn’t pay any attention

I’m getting the same - Disarm is generating intrusion alerts when door sensors are opened and closed.

Logged a case with support last night. I’ve currently uninstalled SHM due to this!

Me too. I am getting constant alerts and flashing lights like a disco. My motion sensor that is not linked to the security set up has just completely stopped working too. I have tried three times disconnecting and rebooting my hub. Support ticket raised.

Yup, had exactly the same thing on Sunday. SMH showed as disarmed but still getting intrusions from motion sensors.

Had to manually arm and then disarm SMH and was then all fine since.

Was there maybe a platform issue on Sunday?

I had the same problem yesterday, had to arm and disarm it to get it working again.

Yes i had it too, Sunday and yesterday. But today it worked fine.

Seems to be a glitch. I’ve experienced this once before. My solution was to completely remove SMH and re-install. Been working without a hiccup since. Knock on wood

Same thing happened here. Alarm started going of even if the SHM was set to Disarm.

After rebooting the hub a couple of times it seems to have solved it self. Have a UK Hub.

No didn’t manage to solve it. Removed the siren because its still going of randomly.

I had the same yesterday, but today worked ok

So glad its not just me. I’ve noticed that when setting the system it now tells me if a door is still open.

If they’re implementing stuff like this, great… But it should be carried out within a sandbox environment full of geeky beta-testers and people who have had free kit. Not those of us that paid retail for our stuff!

SmartThings is like my 12 month old mallinois - its got so much potential, and I love what it could be… But the instability and stubbornness of it to do what it’s supposed to is making me want to give up on a daily basis.

Had the same happens to me today. Take a look at the timings… 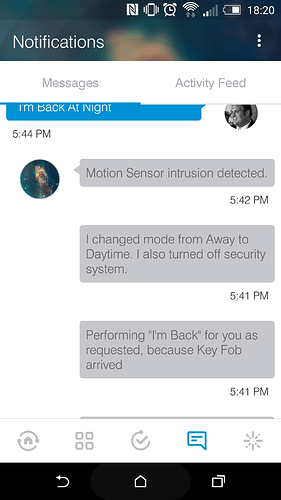 We want to track this.

Yes, had the same problem. Uninstalled the SMH (I think) bloody ridiculous. It’s one thing after another at the moment.

Just submitted one now @slagle - mentioned you in the case too.

I wonder what infrastructure they are built on you would think they would have a pre-prod and beta segmentation that they can carve out for certain users to see what happens rather than releasing code into the wild and falling over every week.