My hub has been offline all day?? whats the deal it has been offline 3 times this week? this is driving me crazey i have the v2 hub and i use it for home security but now with it being so unstable that i should drop smart things all together.

and Yes my internet is fine i have two foscams up and running no disruption and i have checked the connection so its the hub and or smart things service not the connection.

Did you reboot it after last night’s outage?

http://status.smarttings.com shows nothing down
Try rebooting and contact support if needed

yes i did yesterday, i have not had a chance today i am at work. I guess ill have to plug the hub into my one wemo switch take the battery’s out so i can reboot it when im not at home.

Seriously though this is the 5 th time in two weeks.

Here’s a question. How was someone who didn’t come here (or check the system status) suppose to know they needed to manually reboot their hub?

You have the option to subscribe to the status.smartthings.com page so they can email and/or text you updates on outages.

Otherwise, I guess you would just come to it through logical conclusion (have you tried turning it off and on again is a very valid tech support first response).

Their support along with their app functionality has really hit a wall since v2 hub was released.

Sure. You’d think with a major outage like that they would just email everyone or at least push some kind of notice to the phone apps.

Personally I was just routinely checking the support page until that message popped up but I but that time I hadn’t checked in in several hours.

They can’t email everyone unless they’ve agreed to it, hence the subscribing.

They certainly can email everyone without their consent. There isn’t some law stopping them from emailing someone. They can, if they like, let people unsubscribe from those updates.

Either way, a simple push notification of “you need to manually reboot your hub” would have been fine.

Their support along with their app functionality has really hit a wall since v2 hub was released.

Hub V2 and App V2 were released prematurely due to pressure from Samsung to present at the Keynote of IFA Europe (the CES of Europe).

Of course, that also meant they had to do simultaneous deployment of SmartThings in the UK too.

Any young company would collapse under such poor risk management.

When my hub went out last week it caught me by surprise. When I arrived home that evening I had forgot about the notification of the hub being offline earlier that day.

I get home and the garage door doesn’t respond. ST was still down and just so happened that my house keys were in the house. I had to drive an hour round trip to my wife’s job for her keys. I now make sure I keep my keys to the door with me. Lol.

I wish the LFM Evolve relay switch that’s connected to the garage door motor was Bluetooth as well as Z Wave. Is there any way the relay can be hooked up locally?

I had to drive an hour round trip to my wife’s job for her keys. I now make sure I keep my keys to the door with me

I highly recommend everyone who doesn’t carry house-keys to get and install one of these simple, no batteries required, backup systems (or one of the variations):

Smart Locks and/or garage door openers can fail for many reasons. I have a Schlage Connect front door lock with keypad entry (and can use my phone and SmartThings App as a backup if I forget the PIN), but I have used these for a couple decades… 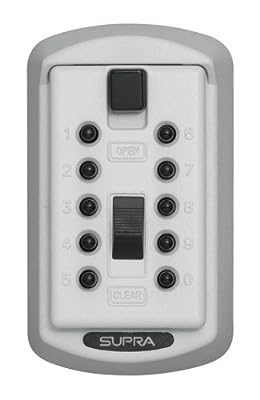