How to install Smartthings Edge Drivers?

OK, but i did it properly right? On the right spot and on the right way.

For example, if it was me, I would’ve tried asking in the following thread:

That doesn’t mean it will be done, but the author may know if there’s a problem with doing it and they can let you know about that.

So would the mentionend information be:

Sorry, I should have answered you earlier.

I can add it to a driver, but I don’t know if it will work or use manufacturer specific clusters.
The clusters that show their fingerprint are not very hopeful, the 0001, power Configuration, for the battery is missing
and 0500 IAS Zone

Hello! I only saw it today! Only after these months I understood what an Eadge Driver is! It is a driver to be installed on my hub, locally, which is awesome! I don’t know yet how to create/edit theses drivers. So yes, I would be very thankful of you could create a driver for my motion sensors. It is a rechargeable battery (I’m not sure if it responds your question).

I note to add it in August to the Zigbee motion sensor Mc driver, but as I told you, I don’t know if it will work since the standard cluster used for battery and movement information (0001 and 0500) is not visible in its fingerprints.

Do you want me to ask Blitzwolf these information?
If yes, what exactly should be the question?

Added to this driver version
Please, Try it and if not work fine, tell me to remove device from driver

I’m out of town. I’m heading home tomorrow. I will let you know then.

Then when clicking on the device it appears this way:

This is the proof that i selected the proper driver right.

I set up 2 automations (turn on and turn off based on motion detection or absence of a bulb for testing). Nothing happened…

I did it from this Driver library:

Can you install zigbee thing Mc from my channel and make a driver change to see what clusters and endpoints it shows?

Smartlighting does not seem to discover the necessary clusters and therefore will not work with Smartthings.

Thank you for trying!

The title of this thread is, “How to install Smartthings Drivers?”, and yet I do not see anything about how to install Edge Drivers from github.

Please post the steps or a link if you have them. Thanks

Follow-up:
I figured it out by looking at this page and seeing the invitation link: 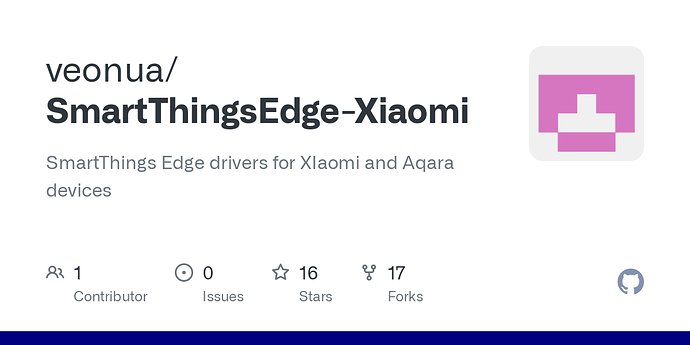 The owner of the edge driver channel has to give you the link to join the channel. You just follow the link, pick the drivers you want, and then they will be downloaded to your hub. This can take anywhere from a few minutes to a few hours.

Some authors will post the link in the GitHub documentation, others will tell you to get in touch through a website or email, particularly if it’s a closed channel as opposed to open for anyone.

So it just varies, and it’s up to each author to decide how they want to control channel membership.

USING A DRIVER ONCE IT HAS BEEN DOWNLOADED TO YOUR HUB

That’s just for getting the driver downloaded to your hub. Most of this thread is about what you do next, and the short answer is that when you add a device to your smartthings set up which has a fingerprint that matches that driver, then The device will automatically use that driver. You don’t have to go through any additional install steps like you used to have to go to with groovy DTHs.

DURING THE TRANSITION PHASE, CUSTOM GROOVY DTHs HAVE PRIORITY OVER ANYTHING ELSE

During the transition phase while both Groovy and edge drivers are available, if you have a custom Groovy DTH on your account that matches a new device’s fingerprint, that’s what will be used. If you want your system to use an edge driver instead, you have to either remove the Groovy DTH from your account all together, or at least modify it to comment out that particular fingerprint.

CHANGING FROM ONE DRIVER TO ANOTHER

If you have more than one driver on your hub for the same device, you can switch from one to the other by going to the device details page in the app, tapping on the three horizontal dots in the upper right corner, and then choosing “driver.” This will show you a list of the drivers already available on your hub for that particular device. Noted it does not show you the list of all possible available drivers, just the ones you’ve already downloaded that match that device.

FINDING OUT WHAT CHANNELS YOU’VE ALREADY SUBSCRIBED TO

If you need a list of the channels that you have already subscribed to, go to the device details for your smartthings hub and there should be a list of driver channels there.

Thank you for the detailed explanations. Very helpful.

I saw this and it woke me up to the fact that now I really do need to take Edge seriously. I will miss webcore but hopefully the replacement won’t be too bad.

Can you please point me to your channel? I have been searching for half a day and can’t seem to find the link

Can you please point me to your channel? I have been searching for half a day and can’t seem to find the link

Usually the author will post their channel link in an author thread in this forum.

The fastest way to find these author threads is usually to check the quick browse lists in the community-created wiki. The author threads are divided into groups by device class, so lighting, sensors, etc.

Most of Mariano’s threads are under Lighting, a few are on the Miscellaneous list.

After an exhaustive search of the forums I still can’t figure out if it is possible to install drivers on a v2 hub. I’ve clicked a dozen invite links and agreed and enrolled a half dozen times and whenever I try to install any driver from any source I get the message that my hub doesn’t support drivers. Am I just out of luck since new hardware doesn’t seem to be a thing?

I get the message that my hub doesn’t support drivers.

From the IDE (IDE->My Hubs), what version of firmware is your hub running? What region are you in?

You can also look in the ST app to find the firmware version for the hub:

find your hub in the app > Devices > All Devices > Your hub > tap More Options (the 3 dots in the upper right of that screen), select Information.