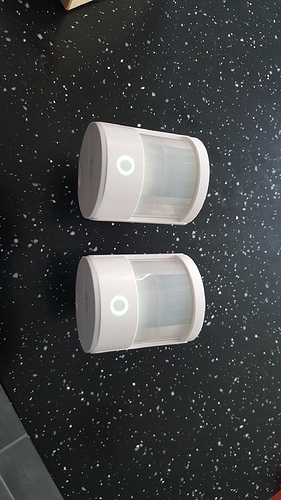 They paired up easily, same experience as you guys. When I next get time I will sit down and try to write a proper device handler for them. I have 3 contact sensors on their way too

I can confirm my motion sensors are now working perfectly, although the range from the hub at which they work isn’t great.

How far are you talking?

I’ve got one on the mantelpiece at the moment, my hub is in the garage inside a closed cupboard. It’s possible however that the other zigbee devices (including the other motion sensor which is half way between in the kitchen) are relaying the data.

I’ve found these sensors to be super sensitive and the detection range is quite impressive. They fire events A LOT, but I’m not sure if that can be changed with the zigbee configuration commands which I’m a long way from understanding as yet. The level of abstraction on the ST side isn’t that great so you’re often dealing with very raw looking commands and data.

I had to move my smartthings hub to the middle of the house and even then i cant put the motion sensor where i want to. Its working about 20ft away on the other side of a thick wall from the hub, but it stops working any further than that. I do have a ST open/close sensor and philips hue bulbs in the area so i dont think it it taking a relayed signal.

It’s got battery reporting and allows you to configure how long the motion stop timeout is (default is 2 seconds) in the device settings. It won’t stop the motion sensor firing events at the ST hub (thus possibly saving battery) but it’ll stop events being fired off from the device type so often if you don’t want it to.

That was quick, many thanks. Will give it a try and test it out tonight when my sensors are due to turn on

I forgot to say in the post, the battery status may not show up immediately, the sensors seem to report their battery state sporadically probably every 15 mins or so.

Right, I have dithered too much, I am going to order a couple of the door sensors and a couple of the motion sensors. Were any of you done for customs/VAT, etc? If not, how many did you order at once? Would I be better to order them separately?

I had to move my smartthings hub to the middle of the house and even then i cant put the motion sensor where i want to. Its working about 20ft away on the other side of a thick wall from the hub, but it stops working any further than that. I do have a ST open/close sensor and philips hue bulbs in the area so i dont think it it taking a relayed signal.

Battery powered devices will not act as repeaters.

Anything connected to a Hue bridge forms its own tiny network and will not repeat for devices that are not also on that bridge.

Detailed discussion in the following article:

Typical zigbee repeaters for the UK are zigbee pocket sockets (including the SmartThings smart plug) and zigbee light bulbs connected directly to the smart things hub, not through a bridge.

Ah yeah, forgot about the battery ones not repeating. I do have anot ST socket in the same room as the motion sensor so maybe that’s it.

Ah ok, thanks for the info.

I can confirm that your device handler is working perfectly for me Chris, including battery reporting. Excellent stuff, cheers☺️

I’ve 1 door sensor, however the battery didn’t last long at all (1 week). I’ve another on the way and two motion sensors and therefore wondering was I just unlucky or could this be the norm.

Has anyone else has experience a short battery life on the door sensor?

Mine haven’t arrived yet. What sort of battery do they use?

CR2032, one of those big button ones, similar to what you find in watches or calculators etc

I’ve already had one battery die in less than a month. I’m hoping it is a one off though as the other 9 are all OK still.

That’s brilliant - I have a few of the door sensors and would be happy to give your devicetype handler a test.

@a4refillpad sweet, sign me up as a tester. Thank you and @kriskit. This will be a handy feature.

Continuing the discussion from Cost effective door/window sensors (UK): Here’s a device type for the orvibo contact sensor. I’ve flagged as beta as I haven’t been able to figure out how to fingerprint properly yet but seems to work okay for me. So you’ll need to manually assign the device type until that is fixed. Any help correcting that appreciated!

EDIT: fingerprinting all working fine and heartbeat event added to allow device monitor type apps to know if the device is alive. [image]

, so I’m only getting 7 days with it!!!. Am I the only unlucky individual here. I’ve have Waynes original Device Beta type associated with it.