Do the Orvibos not work on Metal gates Wayne?

Unfortunately they don’t seem to.

Shame - there’s big slabs of metal under the skin of my UPVC doors, and they seem fine. Perhaps try a spacer? Not a real one, obviously, but something kinda Lego brick sized?

Any sensor which relies on a magnet is likely to eventually have problems if the magnet is placed on a metal surface. It’s just physics. Eventually the metal near the magnet also becomes magnetized and then the sensor will have difficulty.

See the following thread which discusses some of the options:

I kind of agree with the science but I installed a battery powered buzzer with a magnetic contact which cost £1 a pair from pound land. Worked until the water got too much for it after nearly 6 months each.
If I can get something this cheap to work they why can’t I have something smarter?

Usually all you need is some kind of plastic spacer to lift it up off the metal, not very far. Once you know what the problem is, you can usually work around it. See the thread linked to above for more details.

Lastly does anyone who owns one have an opinion of whether the devices are weatherproof? Seeing conflicting information on vesternet. The description says indoor and outdoor but customer comments are concerned due to exposed pcb!!

Just put it in a plastic bag, or even better if you have some, heat shrink film.

But the batteries do. Never put a battery operated device in an airtight container unless it is specifically designed for that use. That includes a plastic bag.

Better to just get a plastic box of the kind that are designed to protect electrical outlets outdoors. These normally have venting and the signal should still be able to come through. They are typically called either a “project box” or a “junction box.” If it’s completely airtight, drill a couple of small holes on the bottom side for venting. 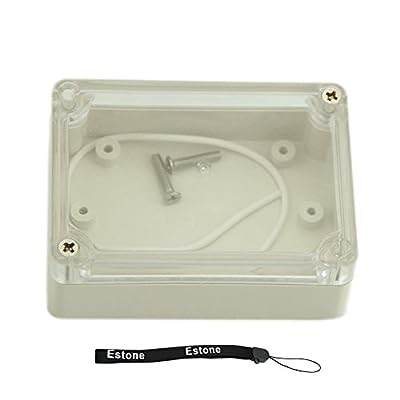 If you’re dealing with something with a magnet, of course, you have to make sure the magnet is still sensed through the plastic, but if it’s a two-part reed sensor you can replace the magnet piece with any magnet, so you can just get a stronger one if needed. Or you may be able to remove one side of the plastic box and still get enough weatherproofing from the rest of it.

I’ve got many waterproof (so hermetically sealed) gadgets with internal batteries.

I’ve got many waterproof (so hermetically sealed) gadgets with internal batteries.

If the device was designed for that, no problem. If you’ve added your own waterproofing, then there potentially is a problem, but you can check with the manufacturer.

Well my first contact sensor has depleted it’s battery again, but at least I got about a month out of it. However my second sensor is still showing at 100% so maybe there is something wrong with my first sensor as @Kriskit theoried

I know I’m a sucker for punishment, but I changed my battery again, but this time ST isn’t picking up that the device is back active again.

Before I remove it and re-add it, is there another option (just that I have 2 CORE pistons referencing it) to get ST to acknowledge that its back operational?

My back door sensor has been working for months now and the door is opened very regularly. Still at 100℅ battery.

Out of the 2 motion sensors I have one is at 80℅ and the other still at 100℅ and have been running longer than the contact sensors.

If the device is offline for a certain amount of time you will need to put the hub into discovery mode and add the device again. There is no need to remove or add rules.

I have gotten through dozens of batteries now. It seems to be related to signal strength. The device in the same room as the hub is the only one I’ve not replaced. Every other sensor I’ve replaced is battery sometimes 3 times over in as many months. Battery life seems to be rubbish for this sensor. These are just some of the batteries I’ve used in them over the last couple of months: 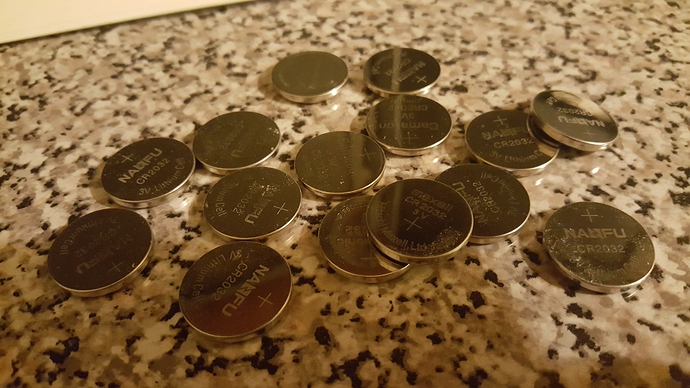 @a4refillpad bloody hell. Battery companies are going to make a fortune out of us

Ironically the one closer to my hub is the bad one, the one on the other side of the house is fine.

Thanks for the suggestion. In the end I binned the two faulty ones and ordered one more to try. That came a couple of days ago and despite a bit of pfaffing about (I couldn’t get it to work either to start with, but then suddenly did start responding to the magnet!!!) its working OK now. Put it on my garage door where the one failed after 24 hours so we’ll see. Was working fine this morning.

I’ve been following the Orvibo threads for some weeks now as I’ve struggled to keep them running consistently and have been making adjustments based on what others have found.
I can definitely agree with A4refillpad, the battery life for this sensor seems to be rubbish. However, I am beginning to wonder if the device itself is inconsistent - I’ve one sensor that is still running, like a Duracell bunny, but it has the original Chinese cheap battery - and I’ve two other sensors that have just discharged their Duracell batteries in less than a week! Most of the other sensors I’ve replaced with Duracell and they are working for the moment - but I have little confidence they will keep working!
Range is also a problem so I’ve been building up my mesh. Economically it is getting to a point that the extra repeaters are cancelling out the lower cost of the sensors!

@Doctair the way your contact sensors have and haven’t consumed battery power is the exact experience I;ve had.

But I’ve encountered no issues with the motion sensors.

I had one that played up, drained two batteries in a matter of days, I then left it alone and a couple of days later put a new battery in and then re-added it to ST. All are fine now. Agreed, all very odd!

I’ve ordered two of these: http://www.banggood.com/ORVIBO-Alarm-Mini-WiFi-Smart-Door-Window-Sensor-Home-System-Remote-Control-p-1027134.html