I seem to have gotten a smart app in a state where I can’t delete it.

I’ve been trying to debug something and noticed every time I install it, another instance appears to log in live logging with a unique id. Even though the web and my app shows only one installed instance of the app.

So then I decided to try to uninstall and delete the smart app from the IDE. When I try to delete from the IDE, I get an error: “This SmartApp can’t be deleted at this time because it is installed by one or more users”

Any idea on how to get past this?

Did you try tracking it down by looking at the devices the spastic app is subscribed to?

The child devices are gone. I’ve tried replacing the code with something with empty installed / updated functions, but no dice so far. I’ll contact support.

There is still a bug with child devices that I found a week ago, my case is an edge case.
But If I move a child device into a group, then uninstall the app, the child in the group gets orphaned.
Also I stopped using the ide to debug service manager apps, if it crashed it would leave orphaned smart apps and child devices all over the place that I couldn’t delete.

I’ve been using live logging to debug the child device / service manager app. I don’t see any orphans in my smart app or device list, so not sure what is going on. It’s fun to play with this stuff, until it gets frustrating

Were you able to get rid of the child device or did ST have to do it on their end?

I’ve never had issues with the child devices - they normally delete fine when the parent smartapp is deleted. At this time, nothing orphaned shows in either smartapps or devices. But when I install the smartapp, I get logging from multiple versions of the smartapp, which causes the installation to fail.

I hadn’t unsubscribed from a location hub event, and what I suspect is happening, is that the subscriptions were not removed when the smartapp was deleted. So when I installed the app the next time to test, another subscription was created and not deleted. It looks like these phantom smartapps are not being updated when I update my code,

The smartapp does not show up in any list in the IDE - not under my smartapps, not under location/home/list smartapps. It’s not installed in the simulator. I even tried to install and then uninstall it from the simulator.

So I have no idea how to address this. I’ve been poking around the IDE since last night, rebooted the hub, removed power from the hub, logged out of my account on the phone.

Not sure what you meant but the original post was that you couldn’t delete the app from ide. Does that mean it’s no longer there? Here’s the image of what I meant by get rid of the home in location. 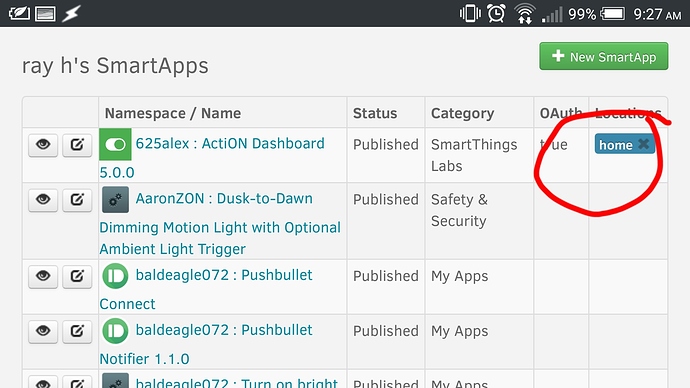 I did all that. The app shows in the IDE in the list of smart apps, but not as an installed app. When I click the edit icon next to the app and then click the red delete button, I get the error message saying that it’s installed.

So what I mean is that I do not see the app installed anywhere, but there are 4 phantom copies of the app running, as I can see them in live logging when I try to install the app again. I need to delete these phantom so that they stop interfering with the “real” installation.

I tried to force a delete of the phantom apps by deleting the code from the IDE. That is what the original post referred to. So the error message seems to correctly state that there are copies of the smart app installed. I’ve been trying to find a way to get rid of these phantom app instances. These instances do not show up anywhere in lists of installed apps.

How do I know about the phantom copies? My smartapp subscribes to the hub location event to receive the results of a network discovery request. When I send the request from the app that I’m trying to install, I immediately see 5 unique instances of the smartapp logging that they’ve seen the device and added it to internal state variables.

I did all that. The app shows in the IDE in the list of smart apps, but not as an installed app.

Did you actually try to go to IDE > My Locations > Location Name > List SmartApps? This list contains more apps that are visible in the ST Mobile app.

If it’s not listed there you should contact support, because there would be no other way.

I too have trouble dealing with ghost event subscriptions…

Did you actually try to go to IDE > My Locations > Location Name > List SmartApps?

Yup - first place I checked. Support ticket already created, but I got a response saying they’re understaffed. I’m guessing an admin will have to go delete some rows out of a database or however they store the data.

I got the ghost event subscriptions to go away by publishing a temporary version of the code that unsubscribed in the event handler. This seemed to have killed the phantom app subscriptions, so I don’t see the phantom smart apps responding to the events now. But the installation of the real app still fails with “unexpected error”, but no errors in the log for either the app or device.

I got the ghost event subscriptions to go away by publishing a temporary version of the code that unsubscribed in the event handler.

Didn’t work for me. I used unsubscrube() that suppose to unsubscribe from all events, but my app is still looking for a method that doesn’t exist anymore…

Don’t feel bad I’ve got 9 orphaned smartapps that engineering will need to be deleting…
The help desk can’t delete theses either.

Was there ever a fix for this issue? I have six occurrences of the Harmony Connect app (3 in labs + 3 in my apps) that I cannot kill. None of them function either.

Remove them in the IDE … https://graph.api.smartthings.com/login/auth > My Locations > List SmartApps (very bottom) > Scroll to the bottom and uninstall the instances

I see the spot and the instances, but there is no option to delete. Is there a secret handshake?

Are you looking at the very bottom in the “Other” section? Should have red text at the end on the very right of each row that is a link called “Uninstall”

Yes, that’s where I am looking. No “uninstall” to be found.

I will submit a support ticket.