Can I use a smartthings connect home device only as a hub?

I have a few of these Samsung Connect Home devices (ET-WV520). I don’t intend to use them for their WiFi as I already have an Eero system in place. Can I set it up without WiFi and just use it as a SmartThings hub?

I tried and the setup seems to make me want to set up a WiFi, but I’m hoping there’s a way to skip that process?

Welcome to the community!

These up with WiFi to be used as a Smartthings Hub.

I would recommend giving this troubleshooting article for Using your connect home as a Smartthings Hub.

You can locate the article here: https://www.samsung.com/us/support/answer/ANS00077158/

I hope this message finds you well!

You didn’t quite answer the specific question I’m asking. My question was can you use this device without the wifi that’s built in, and rather use my home wifi (so I’d only be using this as a hub)? Can it do this, or is that not an option?

Thanks for following up and providing that additional information.

SmartThings can only run some preconfigured automations locally it can run some scenes, known as SmartApps.

Locally-run SmartApps are stored on your SmartThings hub your hub will still run them without internet.

I was advising that you would still need to select set up wifi for the initial set up your device.

I hope this message finds you well!

This model of hub can perform two functions:

One) it can act as a Wi-Fi mesh router, connecting directly to the Internet

Two) it can act as a home automation hub. It still needs an Internet connection because smartthings is mostly a cloud-based system, but it doesn’t have to itself be the Wi-Fi router.

The newest version of this device, the one that uses Plume, can probably do this, it depends on the specific model of the other router, but what you want to do is to put the smartthings device into “bridge mode.“ This tells it that it will not be the Wi-Fi router for the home, it’s just going to connect to an existing Wi-Fi network established by a different Wi-Fi router.

But I don’t know if the older model, the “connect home“ has that same option, which is why I haven’t responded in this thread before now.

This is how one connect home owner posted that they got it to work on Reddit:

This is how I have it setup:

But I honestly don’t know if that still works, there have been some firmware changes and a lot of app changes since that was posted a couple of years ago. And now most of the conversations are about the version with Plume. 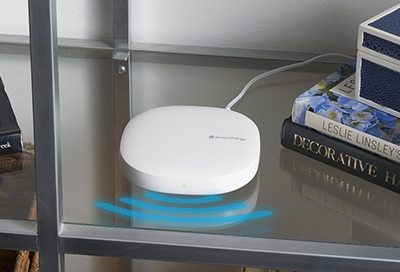 How to set up Bridge Mode with SmartThings

So… I understand the question, but I don’t know the answer. I think it might be possible to put the Samsung connect home into what is called “bridge mode“ which would avoid double NATing and allow the Connect home to just act as any Wi-Fi device connected to your other router. But thinking it’s possible and knowing it’s possible are not the same thing.

I’m going to tag @nathancu just in case he knows, but since this model has been discontinued and wasn’t that popular to begin with, I just don’t know how many people would have these details.

I read it the same way you do JD.

Blif I HAD to, put it in bridge mode and then just ignore the SSIDs of the ST hub.

It makes sense logically and the docs youbpresent say Bridge is a feature. That said I dont have firsthand experience with the WiFi hubs, I’ve avoided this particular device since it came out because theres a very good reason not to combine these things.

If Op is in Europe the Aeotec hubs have srarted showing up, and I strongly suspect we’ll see the North America WASHTub show up shortly… So I’d just wait…

@Zirdum on the older Connect Home Models there should be an option in the device settings (after you select the device and tap on the “3 dot” menu in the top right) to disable the WiFi.

It should be noted that I believe the router functionality is still technically enabled, but if you turn off the WiFi broadcast and put it into bridge mode it is not really playing any major roll in your network aside from just being a connected device at that point.