has anyone gonna this to work yet? any updates?

Try turning off the secure mode of the ST Hub.

I’ve added support for Hue Wall Switch module in this Edge Driver.
Its packet is almost similar to Hue Dimmer Switch, so I’ve added a little bit of code to the existing hue dimmer switch driver to support this device.
I’ve been using this device with my Edge Driver for a month, and it works pretty OK for me. 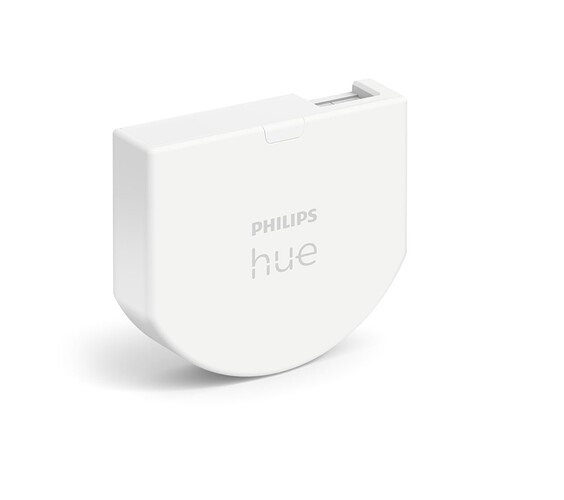 You can setup switch type from the settings as below.

As mentioned in my previous comment, the dimmer 2 was working fine for roughly 1 week, then this morning it stopped responding.
I have tried to remove and reconnect the device in ST app multiple times but still not responding.

Hi @iquix! I’ve tried your Hue Dimmer Switch to connect a Wall switch module to my hub. I’ve tried all the four modes, but in all cases I can only receive “pressed” events, so there is no way to see if there is contact/no contact. Is this just the way Philips built it? Or am I doing something incorrectly?

single or double ‘rocker’ is the mode that you want to use.
That worked for my wall switch module.

could you capture the fingerprint of the device “thing” from the ide?

@iquix I did manage to pair it eventually and it works fine. I noticed though that it won`t work as well in routines than DHT device, but it works well when routines are made in dimmers button variations.

I might be missing something obvious but how do you map the middle to buttons to incrementally change the brightness of a light using a native ST routine? I used to use the ABC smart app and in that you could +/- brightness by a fixed about but all I can see natively is to set to a fixed brightness. Is it down to the device that’s being controlled?

Hi I’ve got the same problem. Paired dimmer switch to ST hub few day’s ago got some philips g10 bulbs paired with hue hub and exposed to smartthings. I want to control them with dimmer switch paired to ST. All was good for few day’s until this morning switch flashing orange light nothing happens in ST app. Any clue’s much appreciated.

I have succesfully paired a dimmer in ST with this edge driver four times and each time some hours or a day goes by and then it seems like the switch is no longer connected. When pressing a button the remote flashes red in stead of green. The remote is still visible in Smartthings but no button presses are registered. It seems like some loss of connection which isn’t established again nomatter how long the remote is laying right next to the hub.

No, there’s no specific multi press packets sent from this device.

i am also having the problems with the Hue dimmer losing sync with ST and just flashing red, after several days.
So far my solution has been to remove and re-insert the battery.
Tried a second Hue dimmer for the same job and it had same issue.

Yet I have one that has not been any issue.

The only difference is possibly which hub it communicates with.
I have the ST Wifi so have 3 hubs around the house.
I had noticed previously that devices didnt always talk to the closest hub.
However I dont think I can check the path and or signal strengths anymore can I on edge drivers??

Well, both dimmer switches went down again.
One doesnt even flash red the other does.
Batteries both check out reasonably on battery tester. Tking batt out did nothing, had to do 10sec press to reset dimmer. Was then recognised as previous label, but 1: Lost its automations & 2: changed room to Hubs room (where all my new devices now seem to appear). Again doesnt register presses in App or on device.
These dimmers have been very reliable for at least a year until I moved them to this edge driver.
The really interesting thing is that initially they both connected to edge driver and worked well for first week, then – very, very difficult to get them to reattach successfully – I still havent got either to work correctly again, new batt, dimmer reset, etc

@iquix I have had another Hue dimmer kill battery, this time in 2-3 days. Brand new Energizer, tested with digital battery checker. Full charge on 21 Jan, dead (2.2v) on 24 Jan. Dimmer was 4 mtrs line of sight of the main hub (there are three ST wifi hubs - other two are other corners of the house). I have had same Hue dimmers working in similar positions (to this and the previously mentioned 2) for well over a year with no issue or battery replacement on the old DTH.
Any suggestions?

Update
And another one has died.
Have about 8 more of these dimmers ready to set up, but may have to discard them all.
Interesting, that of the 5 playing up so far,
2 refuse to be reset
It makes no difference where they are located relative to the hubs.