As much as I enjoy the new Arlo cams integration, I think there are a few things that would definitely increase its awesomeness!

Here is my wish list. Hope Santa takes note, what do you think @Tyler

Others, what are your wish list items. Did I miss anything?

I’m not as knowledgeable about this as you but I kind of also want #4 to allow for turning on the camera without the use of SHM. Again, not really sure about the “right way” but what I want to do is have a rule in a rule engine manage the turning on, recording, notifications, etc. based on conditions in the rule.

Now maybe this is already possible (haven’t got around to setting up CoRE rules for the cams yet). But want a rule there when some trigger occurs (motion, gate door opening, whatever) to:

Again, without the use of SHM. But this is really only because I haven’t got around to using it. So my request may not be a valid one since perhaps SHM is the right way to go.

Most important for me right now is:

And ability to do that from Routines.

Ability to save/share the clip from ST. (Currently available in Arlo)

That IS enabled on Android already, with IoS coming soon. (thanks @twack for confirmation) 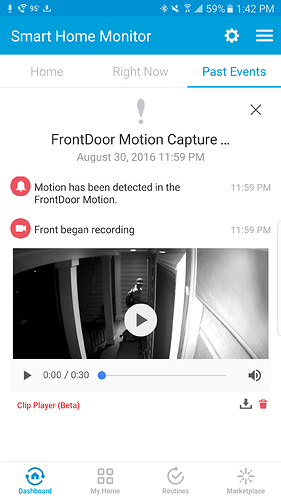 Well this is the first step. i am glad smarthings and arlo can work together. Now lets just wait for more cool features to be added.

Ability to save/share the clip from ST. (Currently available in Arlo)

That was supposed to be enabled on Android already, with IoS coming soon. @twack , @Tyler the download feature on Android is not enabled, is it not ready yet? To my surprise, the delete was enabled, nice touch!

It is enabled on Android. In fact I see the downloading icon on the upper left of your screen shot, so you must have tried it. To get to the downloaded video, swipe down to see your notifications and play it from there.

Nice turnaround for the chief complain. The motion fine tuning is now available along with other back end enhancements.

Hello Community, A small update to the Arlo WIrefree integration is rolling out today. Changes are as follows: Added ability to set/change camera sensitivity in device edit screen. Fixed Livestream timeout error being generated when batteries are dead. Fixed issue where Livestream methods were called when camera is off. Fixed issue where Arlo App generated video events would overwrite last saved ST incident video. Added additional detailed logging for performance metrics tracking. Thank you all for the previous feedback and we hope you like this update. Don’t forget to put a bunch of stars (5) on Amazon, Play Store and/or App Store when you get a chance.

Positive reviews ensure the Engineers and Developers get extra food and water.

@twack any chance to enable the picture capability in the near future, or out of scope?

@twack any chance to enable the picture capability in the near future, or out of scope?

We have a nice early version working that still needs some API tweaks to fully implement. It will probably go out with our planned implementation of the Arlo Q and Q Plus. No date yet, but on the road-map. Meanwhile, here are a couple of screen cap’s that may keep you entertained. 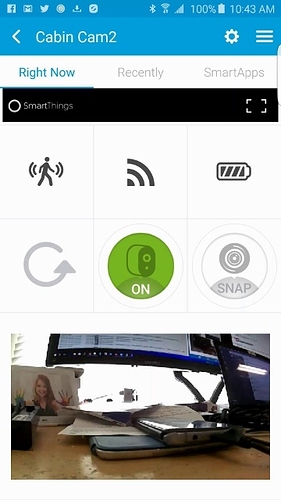 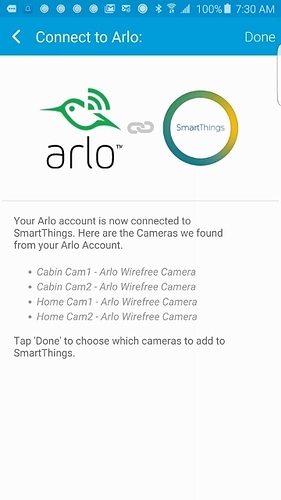 Ok, ok, so if you play this game, then I fill your inbox

There is a public beta testing. If you’d like to sign up, just shoot an email to: twack@smartthings.joke

I would love the ability to keep my cameras on, but disable their motion detection. There are time when I’m home and not concerned about an intruder, but would like to be able to check on my backyard or other room. This was easily done in the Arlo app, by making a mode where the cameras were disarmed, but I don’t see any way to do it with the current SmartThings integration.

CoRE rules for the cams

Can Arlo’s be triggered to record from CoRE yet (directly, not via a mode/SHM)? I see the motion sensors from Arlos in CoRE, just can’t trigger video/picture CoRE action.

I didn’t realize you could access their motion sensors (the arlo cams I mean). That is strange don’t you think? That the motion sensors on the camera are available to ST (and because of that CoRE) but the cameras don’t show up as devices within CoRE.

I’m just guessing, but I’d say they only allowed the functionality of the cameras to specifically work within the integration boundaries (SHM). Hopefully that will change.