I have ext temp sensors and ext fib lighting, for a bit of fun it might be nice to change the external lighting dependant on ext temperature. IE… bloody cold … green, less bloody cold blue and so on

Have a look over at the webCoRE forum here:

Change RGB bulb color based on local outside temperature

I posted this on the old forum, but thought I’d repost it here. This uses an RGB bulb to change color based on the temperature outside. It uses SmartWeather device as the temperature sensor. Colors advance through the spectrum from 0F-100F, getting...

Thanks Nezmo, webCoRE confuses the crap out of me, i did have a look but tbh it is …or appears wayy more complex than my brain can make sense of, if you understand code and all it entails then its a walk in the park but if like me am able to just about use the IDE and github its probably not sensible for me to spend hours trying and failing with webCore

And you want this to be set on your fibaro leds?

He he he… only when you have the time Andy

would it be an issue to change in smaller increment values… say 3 degrees apart. And my aqara temp sensor reads . Values such as 3.2 or as it is now -4.5 , i also use weather tile 2.0 so if the app allows for any sensor that reads temps that would be awsome

A parent/child app might work well here…
That way the parent could contain as many children as you want (max 500!)
You could have a child for each temperature with the ability to set temp and colour
Hmmm… interesting…

How would it interact with your existing door apps (or did you get bored of them)?

Mike, is this the weather tile you are using?

UPDATE: Here is how it looks on android from users below: [image] To install follow these steps: There are 2 ways: 1) copy and paste , 2) update from repo This is easy but be careful when you copy the code because cut-and-paste breaks the ° symbol in the source and you end up with a q…

Bored is a bit harsh. They work perfectly but at times they lacked flexability or i lacked thought… most likely. Movement worked great but if i set police colours on movement and one of my never leaving home sons orders food from some random fast food establishment at stupid oclock at night, flashing police lights at the front door made things difficult.

Yup that is the one
Positively balmy 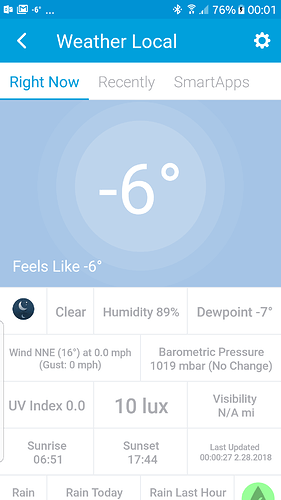 I just installed the tile to see if I can work with this… Yep! No problem as it will show as a temp sensor

Bored is a bit harsh. They work perfectly but at times they lacked flexability or i lacked thought… most likely. Movement worked great but if i set police colours on movement and one of my never leaving home sons orders food from some random fast food establishment at stupid oclock at night, flashing police lights at the front door made things difficult.

So… a bit more detail needed for the child app

The 1st bit is easy…
Select/set:

What am I missing

Hmm
Sunset sunrise
Time
Would over ride current state with virtual switch be possible. I could set up a virtual switch that interups the current colour when in use and sets the fib rgbw to bright white… alexa should be able to handle that in theory so voice command will make a quick lighting change easy

Are you talking about a switch to overide the colour so it goes white?
E.g. it’s 5 degrees so it is green … then you turn on a virtual switch and it goes white.
Something like that?
When switch is turned back off it goes back to previous colour

Need to add ‘level’ setting too… forgot that

Yup. As you have said previously, levels are possible with custom colours but not with pre defined in built options

Hmmm… Previous colour is a bit of a pain… the app would need to hold the colour in a variable…
I think I should be able to do that… just abit more thinking required.

So would you control the changeover switch with your sensor on the current porch light?
(At the same time it could be controlled by alexa but you would also need to turn it off by alexa)

This little app is designed to be used with the fantastic Fibaro RGBW Controller DTH by @codersaur It changes the colour of the Fibaro attached LEDs dependent upon temperature sensor After setting up some defaults you can then create multiple 'Temperature Child Apps’ These child apps set the RGBW to a specific colour when a specified temperature is hit You can restrict the operation by time, sunset-sunrise & an on/off switch You can also ‘force’ a different colour by configuring a switch (returns to previous colour when switched off) This is a parent/child app You need to install the ‘parent’ app and 'publish for me’ The ‘child’ app just needs installing - You don’t need to publish it. Parent App Here: Child App Here: When you install on your phone you need to run through th…