Got my 360 this morning. I haven’t tackled any complex automation yet but the IFTTT channel for Android Wear gives you some pretty simple ways to get started - including tying a button press to a SmartThings action: 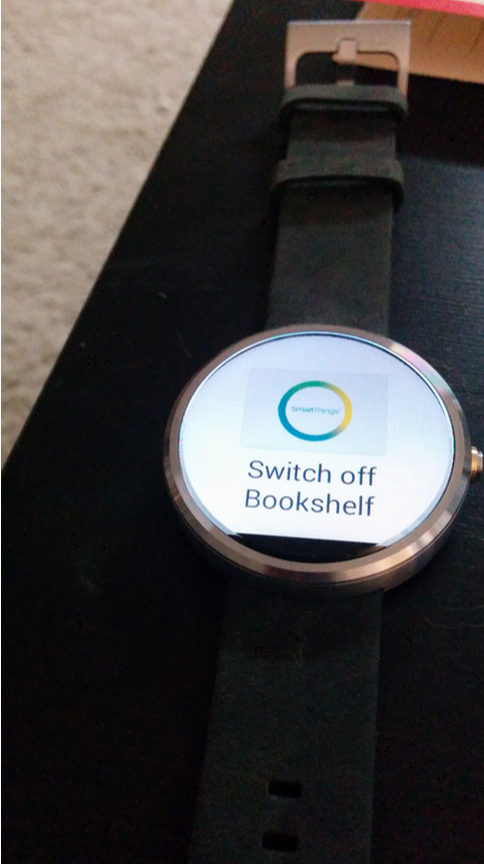 @Tyler, How is the watch and battery life? I’ve been discouraged by terrible reviews…

Yesterday I took a variety of transportation methods, walked to a few tourist attractions, and used the heartrate sensor multiple times. After about 8.5 hours of use it was at 60%. The navigation plugins are very, very cool.

Today - not so good. Lots of people here in the office have wanted to see it so I’ve been demoing it more than normal. 5 hours in and it’s at 27%. It’s going to die before the end of the day.

Overall the fit and finish of this device make it one of the most beautiful pieces of electronics I’ve ever owned. The experience reminds me of buying my first iPod and comparing it to my 32MB RCA MP3 player.

That said, the software experience makes me look back at my T-Mobile HTC Dream (G1) running Android 1.5. Lack of maturity in the platform, some weird design choices, lack of high quality apps and integrations all make this something for first adopters.

I’m using the default setting which is “Ambient Screen - Off”. The watch face turns on when I bring it up to look at it, and turns off after 3-5 seconds when my wrist goes down.

I don’t have any settings enabled that increase the rate of battery drain.

My first full charge got me through the day. For the first 8 hours I couldn’t keep my fingers off of it… and was at 40%. The rest of that time I used it as I would normally, and got 10 more hours till bedtime (where it was 18%).

I am seeing no problem getting a full day with normal usage, but that won’t happen until you get over how cool it is.

As for it being for early adopters, I dunno. It does more than I expected it would, including using Tockle to launch scenes and macros via Tasker and HAM Bridge via voice, controlling Pocketcasts playback, sending and replying to emails and texts via voice, and getting my notifications silently, in a much more timely manner. If these are the things you’re looking for it to do, it does them incredibly well now, and will undoubtedly do more later.

@scottinpollock, your last paragraph sums things up nicely. One thing I realized I liked, not having to worry about customizing alert/ring sounds for applications. I feel like ‘vibrate’ is much more useful not that I’m not digging in my pockets for my phone.

Exactly. I don’t see myself returning it and I’m looking forward to Google updating it quickly with a ton of useful features.

I’m not huge on voice actions though. I use Google Now constantly, but almost never use the “OK, Google” phrase to activate it. The watch really wants you to use voice actions, so the “Start…” menu being buried as it is is a bit disappointing. I’ve tried apps like the Mini Launcher and it doesn’t seem to work well on the Moto 360 yet. I emailed the developer and he said it’s a problem with the watch and not his app. We’ll see.

I’m looking forward to Google updating it quickly with a ton of useful features.

According to Google there will be 2 major updates before the end of the year!

Disagree. It’s in the second most convenient spot possible; one fast swipe up on the menu screen and you’re there. Much easier (and more positive) to get to than any of the items in the middle.

ehh, the “start menu” stuff is a few swipes away from easily accessing, like 4-5 swipes. Wear Launcher gets you to that app in 2, if that. Picky, I know… I think “they” want you use to Voice, and its great and all, but it isn’t ideal in every situation. I would hope that the next update (October 17?) adds a bit more ease of access to apps.

I would hope that the next update (October 17?)

I believe we will see a major release in september. Thats what the rumor-mill says. Will add bluetooth headphone/headphone support and GPS hardware support.

Fair enough. Maybe I’m just not in love with the navigation flow. I also just need to spend more time with it to become comfortable with the operating system as a whole.

I’m and Endomondo user, but no Wear app. Strava is pretty nice though, and I’ve switched just cause its super helpful seeing my stats from my wrist than pulling out my phone (on a bike, at least).

One thing though, on long rides (4 hours) Strava burned through 70% of my battery (on the watch). I did get a ton of notifications while riding, and even voice replied back…

Also, good app (not applicable to all) BabyTime…

Good to know. I had never used Strava before but I occasionally bike to work so I wanted to try it out this morning. That’s probably why my battery life hasn’t been great today.

Hello everyone, CleverObjects, the Android Wear app I mentioned a while ago which lets you control SmartThings switches using buttons and voice on your watch has just been released!

You don’t need to root your phone or download configure toggle/tasker to user CleverObjects, I designed it so that even grandma could use it, the configuration is really simplified.

I too just purchased it. At first I was upset you’d spam the forum, but really you didn’t you posted in ST about a ST app and in an Android Wear post about a Android Wear app.

It’s a pretty neat app. I wish that it wasn’t so difficult to scroll through the Things, look at how tasker for wear does it. That way is much simpler when you have a lot of Things. Also the vibrating on command execution is annoying.

I’m going to uninstall it for now, I will check it out in a couple months to see if it’s made any progress.

Good job on your efforts to the ST community and Android Wear Apps.

Please rate in highly in the play store if you like it!