5 in. or 6 in. Commercial Electric Smart LED Downlight

Has anyone try this can light from Home depot? if so how do they work with smartthings? They are zigbee. 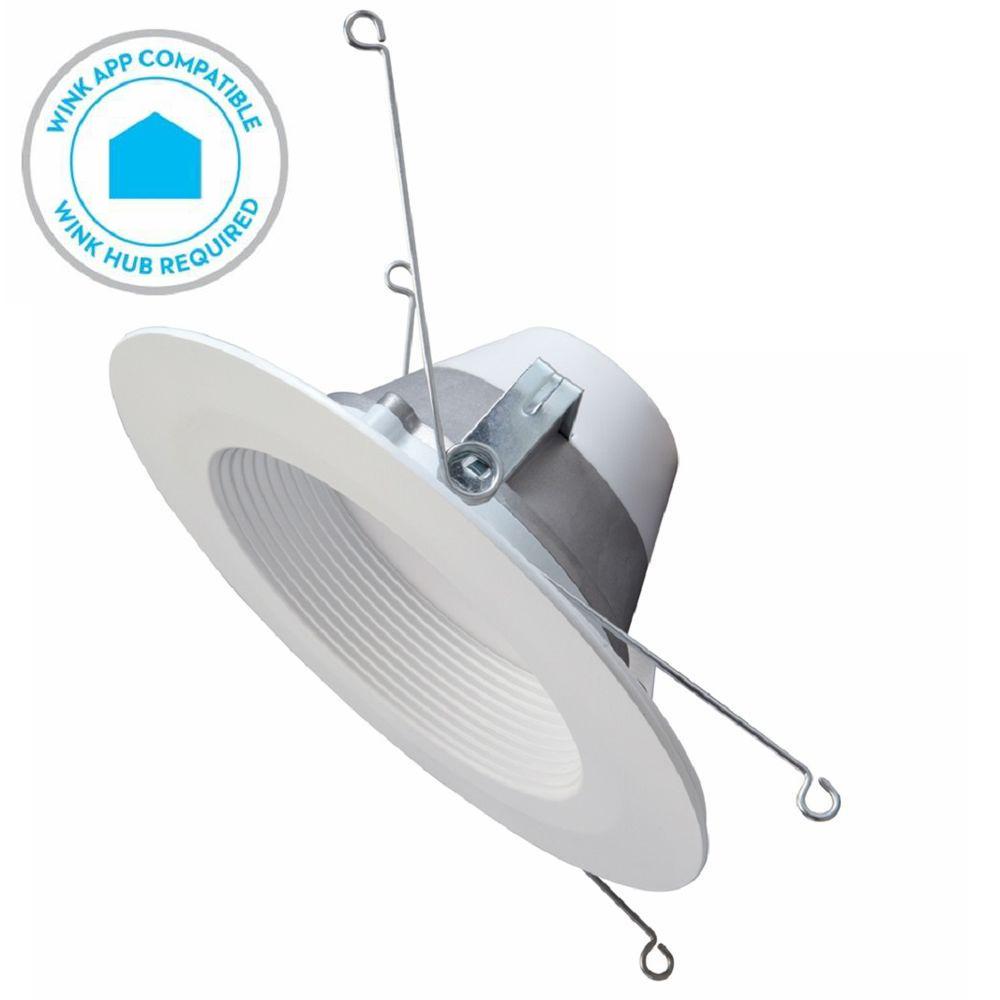 Brighten up any side of your home by installing this Recessed Smart LED Downlight from Commercial Electric. Easy to install.

I saw that at home depot as well. Someone connected this bulb to the staple connect so I think it will work on ST. Just need a nice code Guru on here to write a device type for temp control. You can even use a dumb dimmer switch with this dimmable bulb as per the writing on the package. Not sure how’s that gonna work with lowest dim.

They work on Smartthings and are detected as a Zwave switch- this doesnt allow dimming or color change.
If you change the device type to a GE link bulb, you can dim, but no color change.

I havent found a fully working device type yet; would be nice as Ive got them in my office.

Try the Osram Lightify device type tunable white bulb. That should work the color temp adjustments as well as on/off and dim.

Now to figure out how to get Dim With Me to include color temperature as well!

Here you go! Virtual color temp bulb and adjusted Dim with Me App.

@wackware created a great SmartApp called Dim With Me to be used for group fixtures, and it works best using a virtual master device. It listens for changes to the master, and sends those changes to the selected lights. I added to his app to listen for the color temp event from the Lightify deviceType, and also created a stripped down version of the Lightify to be used as a virtual master. I added both to my Github (links below). 1st add a New Device and assign it to the virtual lightify devicetype, then install the SmartApp and choose the virtual as the master, and select your lightify bulbs in the appropriate section.

So just wanted to pipe in here and highly recommend these lights. At this point in my Smartthings experiment I have used Phillips Hue, Cree, and GE Link LED bulbs. These Commercial Electric can replacements are the most impressive of all. Sure, they don’t do the color tricks of the Hue but they are rock solid using the Osram device type. I’ve never had any device connect as quickly to my hub and at this point have experienced 0 glitches, better than any other bulb I’ve used. They are easy to install, look great, and function wonderfully! I have 11 of them and if they continue to work this well the Links for sure might get replaced. Maybe even the Hues.

Thanks for letting us know! I might look at finally replacing my stupid TCP bulbs with these. I was waiting for Cree to come out with a connected BR30, but who knows when that will happen.

Those bulbs work great with ST and the OSRAM lightify device type. Really good stuff: $30 smart bulb, dimmable, adjustable color temperature (2700K to 5000K), 90CRI. I’m changing all my downlights with these…
I thought I had read here a little while ago that someone wrote a custom device type that responded faster than the OSRAM one but I can’t find that post. Does that ring a bell to someone?

Does anyone know if it’s possible to disable the memory function for these bulbs? I’m talking about how the bulb comes back to the previous level after being electrically turned off and back on.
I still have dumb switches and if the bulbs are turned off remotely via ST, turning off/on at the switch doesn’t actually turn the bulb back on (since the last level was off) which can be highly annoying.
I’m wondering if there is some ZigBee command that could change that setting.

I just purchased two smart LEDs being discussed. I can’t get them to connect using the Osram Lightify type. They connected as unknown things so I removed them and tried again a few more times with no success. Any advice? And how do I search for the Dim With Me app? Not finding a search feature in smartapps.

and sign in and copy and paste the device type into your account. Have you done that before??

Thanks, @llcanada! I did just that and edited the type to the Lightify Tunable and they both work! I have two cans on one switch. The temperature and brightness seems to be working but I’ll play with that tonight!

Thanks so much for your help! I’m new in the home automation game and our new old home has so much potential!

@rachelpherrick the switch needs to stay on permanantly for your the control with your phone. you don’t need a smart switch.

Thanks @ajma. I think it will take some time to get used to and the light will still be primarily controlled via wall switch. My husband hasn’t jumped on board fully with the home automation stuff. He still uses a key to open the front door instead of a code or app. Ha!

But in the meantime, this will be fantastic to change the temperature and brightness. Sometimes I need a working light and sometimes a mood light.

Also, is there a Facebook support group? I have never gotten the hang of forums and I am still nervous to create posts when I can’t find what I’m searching for.

hello there, not trying to dig up old data, but I am having some difficulties here…
have been trying for a couple of days now to connect one of the commercial electric Smart LED downlights from home depot to my smartthings hub.
connecting new device is successful in finding the “thing” and then after editing the “device type” to “Osram Lightify type device” my actions are recorded successfully within the app and within my online login account showing last updated, current data and current states. The app shows me turning the light on and off, however the light remains “on”.
I have tried a hard reset of the light itself (5 / 3 second on off cycles of the light) and then reconfiguring, but still can not get the light to behave according to what the actions are on the app. (leaving the light powered on by house current).
smartthings hub V2. firmware: 000.014.00026
the Zigbee id is successfully retrieved as well and status is recorded as active and heartbeat is “alive” everything seems to be in order, but the app will not turn the light on or off. the app (iphone) responds accordingly with the “green” on icon. or “grey” off icon.
any thoughts?
thank you.

I’m very new to ST and all these automation things. I am looking into buying these high hats from commercial Electric and am trying to do research prior to buying. What exactly are you talking about with the copy and paste

Let me see if I can shed some light on the process. Pun intended

I do not have these specific downlights , but the process to change the device type is universal.

Then what should occur is the downlights will be discovered by the hub and show up in the Smarthings App for Android or IOs. Since the hub does not know what these exact downlights are as there has not been a device type written SPECIFICALLY for these downlights then they just show up to the App as a generic device that has communicated with the hub. That generic device is typically listed as just “Thing” or “Unknown Device”.

Its like a placeholder indicating the hub has discovered something that has communicated with it , but it does not know exactly with specificity what that thing is.

Once this has taken place one would log into the web page based Smartthings IDE. Found here:

If one does not have an IDE account well then they would be required to create one.
After doing so one can log in and click on a specific heading named Devices. Under devices there would be listed an " Unknown Device" or “Thing”. One can choose to edit that device and click on a drop down arrow that presents many device types that have been developed and received the “Blessing” of the SmartThings Development staff. One of those device types that has been developed is meantioned within this thread and is a very close approximation of the device type that would be needed for these downlights to function with the SmartThings Hub.

Whew! Now that was quite a bit to explain in laymans terms!

In short this is stating that these downlights are not recognized natively right out of the box as there has not been a unique device type specifically written , coded, developed for them. However, one can make use of their functionality with the SmartThings hub by using a device type that has been developed that is super duper close.

I have a pretty good understanding of electrical, I’m an electrician lol so I understand feeds, switches, travelers and all that great stuff. I will probably run to home depot tomorrow and pick up a light to see how it works out. You might be my 911 go to so stand by haha