I’ve gotten totally lost, and judging from forum comments I’m not the only one. I know that some Arlo models work with the new V3 app and some don’t, but I don’t know which is which.

Also note that just because a hardwired version works that doesn’t mean a battery operated version will, and vice versa.

Also I’d like to limit this thread to what works with the new V3 app given that we’ve already been told that the classic app will be going away eventually, and potentially by the end of this year.

Thanks for everyone’s help with this, there just have been so many changes over the last six months I want to pull together all the current information in one place.

(There is a similar but separate thread for ring models. This one is just for Arlo.)

The Arlo Original, Pro and Pro2 cameras will work with Smartthings but the Video Doorbell, Pro 3, Pro 3 Floodlight and Ultra cameras will not.

The Arlo Original, Pro and Pro2 cameras will work with Smartthings but the Video Doorbell, Pro 3, Pro 3 Floodlight and Ultra cameras will not.

Do they work just as cameras, or is the motion sensor also available for use in automations?

I know you can cross trigger Arlo devices, but I am not sure you can use Arlo devices to trigger Smartthings devices.

So can I make my Arlo cameras record if A contact center is openEd? Or If a motion sensor is triggered? (We used to be able to do that in the old app with SHM)

You should be able to set up automations in the new Smartthings app that do that.

You should be able to set up automations in the new Smartthings app that do that.

Multiple community members are reporting that this has stopped working.

Arlo cameras not responding to ST commands (May 2020) Devices & Integrations

Just noticed this morning that my Arlo cameras aren’t working with ST. This happened a few weeks ago as well. I generally have them switch off when I open my kitchen door, even though within ST it says they have switched off, they haven’t.

You could try setting up custom rules in the old app and see what happens. I don’t use Smartthings with Arlo products much anymore, but it is worth a shot.

Trying to keep this thread just to the new V3 app, though, since we know the classic is going to go away eventually.

I know it already works with the old app. This thread is about the new app. I want to know if anybody is achieving this with the new app.

Arlo Pro2 and Arlo Q Plus cameras seem to allow both the motion and audio sensors to work as triggers.

So, it’s fragmented support for Arlo cameras in the new SmartThings Connect app because of this limited recording ability. I still have ‘custom’ rules setup in the old SmartThings Classic app’s SHM to trigger Arlo camera recordings using other motion or multipurpose sensors as triggers.

Then there’s the Arlo Connected Service which every week or so lately has to be refreshed since the Arlo cameras will show Offline in both SmartThings apps, like they are this morning for me again. Arrrggg…

As I said before, I have very limited experience with the new app and Arlo. I gave all my older cameras to my daughter and bought her a V3 hub. I was able to set up some scenes but not able to have any devices trigger the cameras to record, so I don’t think that is possible in the new app.
My thoughts here:
From the time Arlo went public, it appears that they want nothing to do with Smartthings, which is a shame as the integration between the two was fantastic and was the reason I bought the Arlo cameras in the first place. For all of us Smartthings/Arlo users it seems to me that we need to forget the integration between the two and treat them as two separate entities, Pity. Smartthings needs to team up with some other camera manufacturers or make cameras that compete with Arlo and the others. In watching Arlo on the stock market, I think they will eventually go out of business or sell out to someone that has the money to make them a stronger company.
Great cameras , though.

I had a friend check who has the Arlo 3 model. They are able to set up IFTTT applets to record, change the camera’s arm status, or to turn on the siren, and can use the camera’s motion and audio sensor as the “if.”

There is, however, an added lag when compared to HomeKit.

But it should be a possible indirect integration for some use cases. 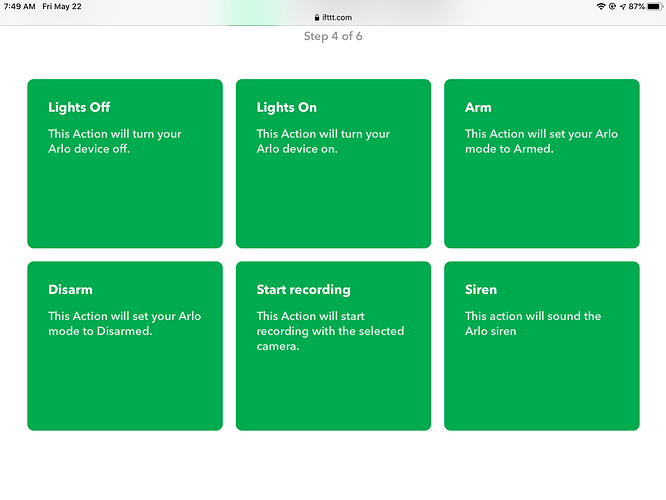 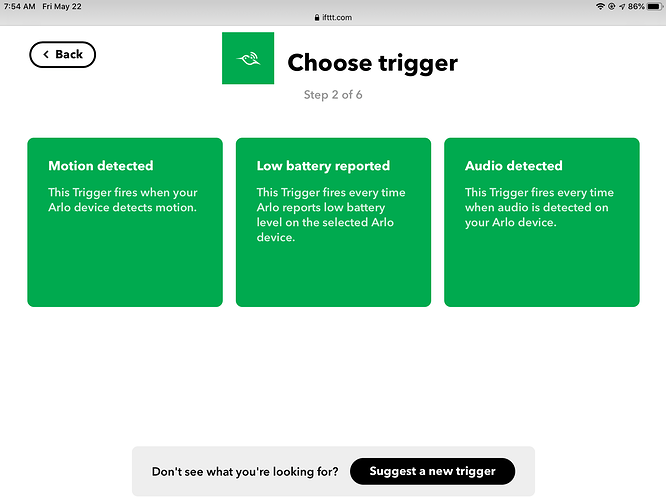 The Arlo integration has been updated from Groovy to the new APIs. I haven’t been able to test since I don’t own Arlo, so I’m curious to see how you all fare, what’s new, etc.

As for me, I don’t see any changes. So I opened the Arlo connected Service and selected ‘Done’ to see if that would refresh it to make any changes, but still do not see anything changed. I still cannot trigger a recording when attempting to use my Arlo Pro 2 or Arlo Q+ cameras in an Automation which is the biggest thing for me so that I can use other SmartThings sensors to start recording.

I hope that it fixes the Arlo connectivity bug where the cameras appear offline in SmartThings occasionally.

The arlo connect service is the old integration. You probably need to add arlo again from the new app.

Unable to capture Arlo video or image through automations
Automated_House (Jimmy aka SmartThingsBeat) August 7, 2020, 12:27am #18

Months ago would still be the old Groovy integration, even if you added it In the new app. The new integration only went live days ago.

I removed and reconnected the Arlo Connect, but now it’s totally screwed. I can no longer turn the cameras on or off via SmartThings and can’t use the camera’s sound sensor in SmartThings like before.

This is a major step BACKWARDS!!!

Funny thing is, the only feature available now is just Recording. But what good is that if the camera isn’t on in the first place.

Arlo integration with SmartThings is total garbage now from what I’m seeing!

Months ago would still be the old Groovy integration, even if you added it In the new app. The new integration only went live days ago.

How do I tell the difference? I removed the Arlo integration and added it via the new app. Still says Arlo Connect