i’ve been using the Multi Switch with Virtual Tiles for Master Switch by @cooperglee smart app, and it’s been working great with the Aeon Smart Strip. Have a couple of questions:

Where is the source code for the smart app? I haven’t updated it in a while.

Also, I have a LED strip that’s plugged into the smart strip, I previously had it connected to a dimmer switch and it worked great, so my question is how can I config the app so that it’s a dimmer virtual switch?

Any good news on the upcoming integration of this Aeon Power Bar ?

I think we’re still waiting on official support for devices with multiple addressable outlets. I think that’s happening soon. I’ll check on it.

I am looking forward to fully utilizing all of the the features of the Aeon power strip within the Smartthings environment.

I cannot wait for what the next few months has in store for us for new compatibility announcements.

I know it’s probably too soon (especially given all that’s been happening here lately), but has there been any more on this device type yet?

Also, for those that have one (I know this is a pipe-dream, but still), does it have terminals that allow us to use it as a multi-input dry contact sensor (always looking to see if there is anything ready-made yet to help with wired home security alarm systems)?

@hdonis
Did you ever write up the step by step instructions. I need help with this as I am not a programmer.

@Tyler any news on when this will be available?

WOW, long thread. It took a few minutes for the powerstrip and ST to report so that I had individual access to all 4 outlets. Is there a way to individual name them yet? 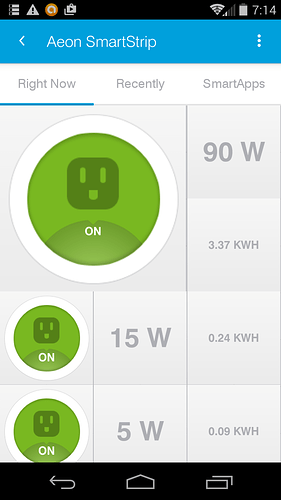 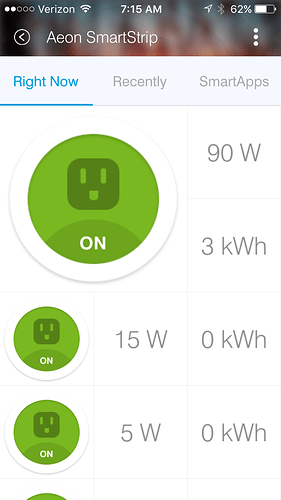 I was able to control the 4 switches individual as well as all at once. As far as the gui goes, how could I modify my Smartthings gui to display at least one decimal place precision? Values in integers are okay for high power consumption devices but things with less than a watt and kwh, I’d like to see a little more than a truncated figure.

that would be the illusion of precision

the more tightly you grasp at digits, the more significant values will slip thru your fingers.

You can modify the devicetype to get what you want. It will increase your update traffic as it twitches more. It won’t be more accurate. 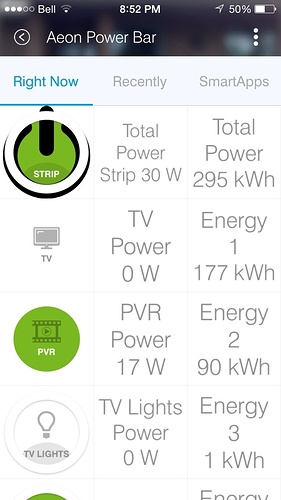 I played around with the code and added in my personalized icons.

I wish I could use timers for each outlet.

Hopefully this device will be fully supported soon!!!

I have the virtual tiles and can turn each outlet on and off by pressing the tile in the app. HOw do I set a particular outlet to go on separately via an action, like when my garage opens?

This is what I am waiting for as well.

What is the most recent published version of this? It looks like some of you have it working, care to post the code please?

@Kooltaco where in the code did you modify it? I know nothing about modifying code

Where can I find the most recent version and does it have instructions?

Does device type and app by cooperglee still work? I tried installing the app in IDE but it was throwing errors.

I’m using his device type but not the app. About 80% working I’d say.