I have four short hallways in my home, each with two switches (standard 3-way setup). For each of these hallways, I have the following requirements:

Most of my house is using GE 12722/12724 switches, which require the GE add-on switch. This is fine, but I thought I’d give Zooz switches a try for these 3-way setups (to save a little cash). My initial plan was to use separate z-wave motion sensors in each hallway and just script the lights to react to them (I have a stack of GE motion sensors here), but a thought occurred:

Could I use a motion sensor light switch as the 3-way switch with a Zooz ZEN21?

The extra switch used with a ZEN21 (correct me if I’m wrong; going off the wiring diagrams) basically works by just switching together neutral and a single traveler wire at the second switch. That switch needs no power; and could even just be a normal single pole switch.

That got me thinking - if there was a normal dumb motion sensor switch that was dry contact and did not use the same powered line to both feed the motion circuitry and actually make contact; it should be possible to use it with a Zooz switch. The only problem is that I can’t seem to find something like this. Maybe it doesn’t exist?

Diagram of how I think this would work (edit: there’s an error here, the unused traveller line should go to line, not load): 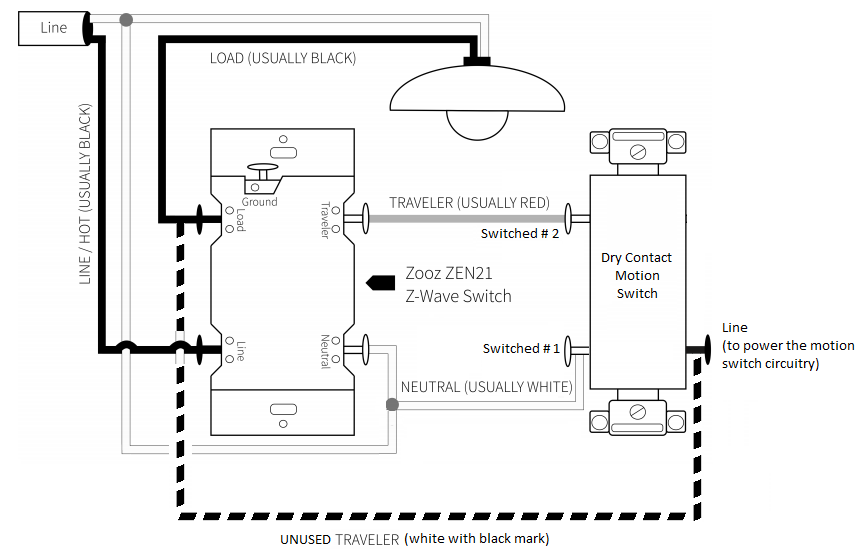 Why don’t you just create a virtual three-way? Any motion sensor that can talk to the smartthings hub can send a message to the hub, and then you can have that message cause the hub to send a message to your master switch and there you are. You don’t need to wire the two devices together.

As far as getting some kind of dumb switch and wire it in as an auxiliary, finding something that will work to code and not end up costing more than just a regular motion sensor seems unlikely.

That would get the job done, but I definitely want the lights to still work in a 3-way configuration even if the hub is unavailable.

I’ll almost certainly just use separate motion sensors mounted on the ceiling to take care of this, but I was trying to see if I could take care of the sensor and the extra switch in one go.

That would get the job done, but I definitely want the lights to still work in a 3-way configuration even if the hub is unavailable.

You can choose a Motion sensor that supports association and directly associate it to the switch, but then you have no rules control over it, every time the motion sensors triggered the switch will come on. But it would work even if your hub is off-line.

i think you would have a hard time finding a “dumb” motion sensor switch that has separate power input for the motion sensor and the switch itself. I like having them separate so that the motion sensor can be angled better to turn on when needed without picking up false motions from a nearby room or having a lag if the angle is real wide.

That got me thinking - if there was a normal dumb motion sensor switch that was dry contact and did not use the same powered line to both feed the motion circuitry and actually make contact; it should be possible to use it with a Zooz switch. The only problem is that I can’t seem to find something like this. Maybe it doesn’t exist?

If you’re willing to wait a couple of months longer, Zooz may just have an answer with their new Z-Wave switch

We don’t have a release date yet but it will be a motion-activated switch with upgraded Direct 3-way technology.

For now I went with separate motion sensors (and I end up using GE switches to get around the load limits), but I’m putting the Zooz switches in closets where I have multiple lights, just to make good use of them.

GE really has a good handle on the smart motion switch and motion dimming options with the 26931 / 26933, but I would definitely welcome a cheaper alternative if I can fit it into my setup. I’m curious to see what you guys come up with

Hi Paul, to our best knowledge GE switches are not trailing edge and they really are limited in the same way, they just don’t mention this in the product documentation because malfunction due to low load is pretty rare, but it does happen and we’ve seen it with all brands we’ve ever carried for z-wave switches and plugs.

Trailing edge vs leading edge is important for LED driver compatibility when it comes to dimmers. Minimum load is more tied to the executive element (MOSFET vs TRIAC) and we hope to have the switch based on MOSFET to be as universal as possible.