Zigbee - from flakey to stable

Interestingly this isn’t my experience…plugging in the xbee and scanning showed it had already claimed some devices.

The Xbee builds its neighbor table as soon as it joins, the issue is whether the other devices that were already on your network will know that they should be using the new repeater. Sometimes they will, often they will not, but forcing the network heal by unplugging the coordinator ( and taking out the batteries if you use them) will cause all of your zigbee devices to check for the best parent available when the coordinator comes back.

As @JDRoberts mentioned did you try a zigbee heal by powering down Hub and removing the batteries from the Hub for 20 Minutes after adding the iris repeaters? They won’t automatically use the repeater until you do the heal. I am curious whether the issue is with the devices themselves or the repeated. Also how far are the devices from the repeater? And are there any potential sources of interference between the repeater and the devices.

I have not tried the heal but during the pairing process if the Xiaomi sensor parent is the iris repeater (looking at the zbjoin) the sensor will drop off because it never reports in. If the parent is the ST hub (parent 0000) the senor will stick.

The little £11 XBee’s setup as a router appears to have helped with my presence sensor unreliability. Finding good cheap USB adaptors that work well is a challenge though.

Instead I’m in connecting them to cheap Arduino clones. The Xbee Pro’s got a basic temperature sensor in them so once I’ve got the arduino software sorted, I can flood the house with cheap, repeating temperature sensors. As long as they don’t suffer too much from self-heating that is.

Yeah its weird, the usb adapters flooding ebay literally have a 50% failure rate (DOA) for me.

Further update, i bought a couple of super cheap xbee pro 2 (63mw wire aerial) from the states (the arent strictly legal in the UK, the only legal uk versions are the 1mw - hence the hub being such poor range.

They have huge range. Just to test, i put a door sensor in my shed (25m away, through a brick cavitiy wall). No problem, stable and good signal.

Success today! Turns out I didn’t get the same model as you have. I have XBP24-ZB - so couldn’t load your profile directly. I did open it and copy your settings to my own. I then had to do some additional parameter changes I found on another thread - and success!! I’m mapping! And am clearly at the 32 zigbee limit.

Next step is testing my Xiaomi motion sensors using this as a repeater.

Have two and have spent less than $30 total - love it!

I’ll probably post the profile I’m using for my model once I’m 100% sure about it.

Anyhow, thanks again for taking the time to post the guide.

I have bought the same xbee as you. XBP24-ZB. Can I get your config file??

You need to be careful when you pair the xbee to the ST hub. Mine paired via an iris plug. Therefore my guess is that the Xiaomi devices will not repeat because I have a bad middle man…

So one of mine at least has started to pick up devices - some of my Quirky Trippers of all things have joined one of my Xbees and are working nicely. I also moved the Xbee to a better location. I think it’s a matter of time. And even so I’m hopefully opening up some direct slots.

I intentionally haven’t done a full repair of network - last time the repairing was a hassle.

I couldn’t use your exact profile because of different model - but I used the settings I could (my channel only goes up to 3FFFF vs. your 7FFFF for example) and also experimented w/ @TN_Oldman’s DIY Programmable XBee (S2B,S2C) ZigBee integration with SmartThings

Thanks again for the great guide!

Sent in PM - want to make sure it’s working well before I post publicly (it’s a mix of @adam_walker 's and @tn_oldman 's settings because of different model.

Fingers crossed it gives you stability. I haven’t had a drop since

@adam_walker BTW - I have two. One I’m using only to map networks (I love the animation there, btw). Since it’s not always plugged in would it make sense to reflash it to just be an endpoint? Or would it be ok to leave it plugged in somewhere else as a repeater and then attach it to my laptop for mapping - just afraid moving it around and plugging/unplugging all the time could confuse any devices attached to it.

So I just bought an extra one to keep.mapping, but for a while I plugged it in and out and used it as a router (switching between a mobile charger and the pc). It always reclaimed the devices instantly so didn’t introduce instability.

Thanks! I’ll give it a try. Having 2 running probably can’t hurt!

I didn’t have any luck mapping networks when I flashed as an endpoint unfortunately.

Swapping between a mobile charger and pc when I needed to map the network works for me.

Is this kit similar to what you have

Is this kit similar to what you have

They look like S2C modules with 802.15.4 rather then ZigBee Pro firmware.

I read somewhere they can be flashed with with the ZigBee Pro firmware but not 100% on that.

Handy link to a comparison document 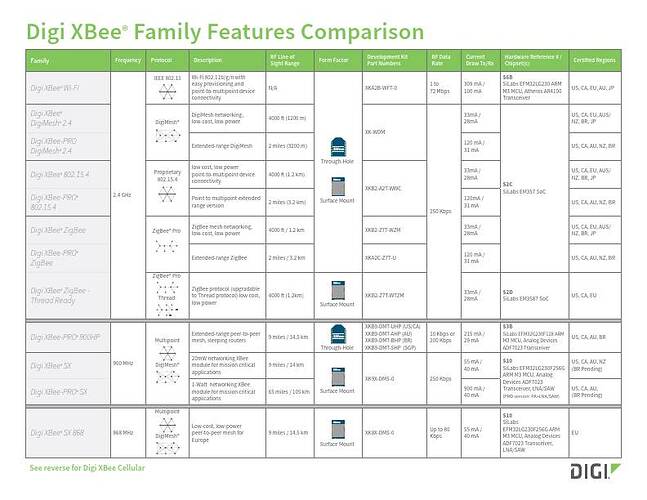 OK thanks for your help just trying to find a kit out there that works together since the USB modules seem to not work 100% of the time. Recommended USB modules would be great please.

Page 303 of the S2C user guide on the Digi site suggests 802.15.4 modules can be flashed with the ZigBee firmware so that kit maybe ok if you are prepared to take a risk.

I bought a Waveshare USB adaptor from amazon for about £11 and a few cheap ones from eBay. The Ebay ones have been hit and miss but the waveahare one seems good and if it it didn’t work then it goes straight back to amazon for a refund.

Thanks and bought the S2b’s from Ebay. I am willing to try this since I have SOOO many devices