All my zwave devices have been offline for almost 24 hours.
i’ve rebooted a few times, completed numerous zwave repairs all to no avail.
I’ve turned off all the power and on again and still nothing.
Submitted a ticket to ST but havent heard back at all.

I’m only new to ST after coming from Fibaro… seems like this is has happen to a few people.

seems like this is has happen to a few people.

Yes it does, and there can be several reasons why.

Do you see them as offline in the new Samsung Connect app, or the IDE? Do you get the same results with the SmartThings Classic app?

Yes i see them offline in both the classic and new app.
in IDE they are showing as offline for 18 hours

When i run a network repair the events log shows:
Network repair for Front Lights [05]: Failed to update mesh info
screenshots below: 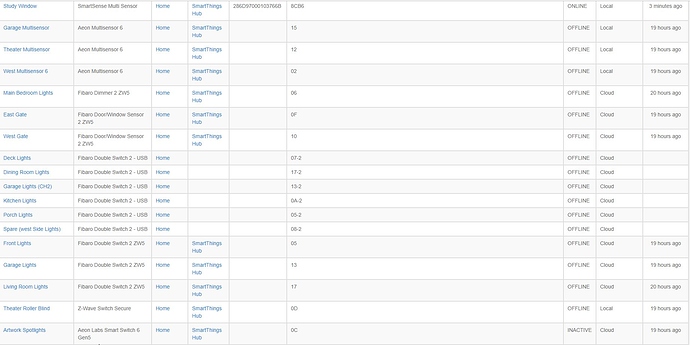 Ouch, that’s not a pretty image. What’s the state of your zwave radio, does it look like this (should say functional):

also the logs are showing this:

also the logs are showing this:

Yeah, I’d expect repair messages to send those messages given the state of your zwave devices.

state is showing disabled even though i’ve enabled it in the utilities area:

state is showing disabled even though i’ve enabled it in the utilities area:

Oh no. You can keep trying that, or power down (take batteries out if it’s a v2 hub) for bit, say 30 minutes?

thanks John, i’ll give it a shot. its a v3 hub so i’ll pull the power for a while.

Hey John,
I powered it up after being off for 30 min and the zwave status is now ‘Functional’ but zwave devices are still showing offline

Ok, good news. When devices go offline for me, I usually have to pull the airgap switch on GE devices, but for my Aeon micro in-wall devices and a Leviton device with no air gap switch, I have to power cycle them at the main power panel (inconvenient as it is).

Rarely have I had them just come back on their own, but that may work for your devices. I don’t have what you do, so I have no idea how they’ll behave. Given you’ve just now brought your hub up, they may go online as your zwave mesh gets put back together.

Keep an eye on your radio though to make sure it doesn’t go disabled again. If it does, support should be able to help.

Thanks John, i’ll keep an eye on the devices list. So far nothing has come back online.
I’ve power cycled some of the aeotec sensors i have at arms reach but most are fibaro light switches which require me to use the fuse box to power cycle.

Well that’s not the news I was hoping to hear from you. Has support contacted you yet?

You might want to try the Replace feature in the Classic app for each device. I know that means having to do a lot, but it may be worth a try on just 1 or 2 devices to see if that works for you.

Yeah not having the best luck unfortunately. No response from any support rep.

I’m currently on hold and waiting for a support representative.

I’ve tried doing a remove or replace and it won’t repond to any device when I hit the buttons on the device to invoke a replacement or removal.

IF i factory wipe it, there’s no way to restore or anything right?

IF i factory wipe it, there’s no way to restore or anything right?

Right, no way to restore connected devices. Sorry to hear that you’re having this problem!

@Kianoosh_Karami this is my thread for the issues