What's you favorite LED light bulb to go with the GE dimmer 12724?

So, I like the GE dimmer switches. They are easy to get, look good, you can turn off that LED if you want and comes in white and light almond colors. Also, it is rated for LED bulbs.

Most of my switches control either one or two light bulbs that are in recessed cans on the ceiling (that’s how the house was built and don’t plan on changing it for now) where I can put either an A19 or a BR30 light bulb. I initially tried the Cree 4-flow LEDs (daylight, for all it matters) and they buzzed. I then changed to the new Philips A19 60-watt replacement, and that didn’t seem to buzz, but it had a subtle flicker when dimmed, which I was just ignoring.

Today I got home and one of my Philips bulbs didn’t come on. Now I have to replace it and might as well get rid of the subtle flicker. I had some EcoSmart 40-watt replacement LED bulbs laying around, tried them and they seem to work, but for some reason they flick quite a lot when at 100% (weird).

Before I head out and ransack Home Depot, and give myself a headache, thought I might ask:

What is your preferred LED light bulb of choice for the GE dimmer 12724 (the new version that requires a neutral and is rated for LEDs and CFLs)? More specifically, when you only have 1 or 2 light bulbs controlled by it?

How do the Light Switches Work?
Please help me find a dimmer! I gave up (dimming characteristics of different zwave switches)
RLDreams (Really Living the Dream) November 20, 2015, 2:12am #2

I have the Cree Ecosmart 10.5 W LED can bulbs ( From HD ) in all our recessed lights and never had a problem with flicker or humming. That said I use Leviton dimmers not GE

Previously I purchased the Cree A19 and had no issues with those.

Recently I bought the Ecosmart A19 4pk and am pleased with their performance at $5 a bulb.

Thanks for your replies, guys. I left the Ecosmart bulbs yesterday to see how they fared and for being a Home Depot brand compared to a “known” brand, I was impressed. Today I’ll be going to big orange and try new ones, while I return the Philips bulbs.

The Ecosmarts say “Non-dimmable” on the packaging. Did you use them with a dimmer switch and, if so, how did they behave?

I have issues with low dimming so I’m curious what people here find. Either the bulbs don’t get dim enough at low levels or they won’t light up when I turn them on to a low level (I have to turn up the brightness to get them to light up before I can turn them down again). I would pay up for bulbs that did not exhibit these issues.

I just scanned the UPC on the Cree dimmable can bulbs I have and it came up with a flock of Pink Flamingo lawn ornaments. So I will just assume that these are no longer available.
The ones I have are 10.5W dimmable with the trim attached to the bulbs and work perfectly inside 6" cans. 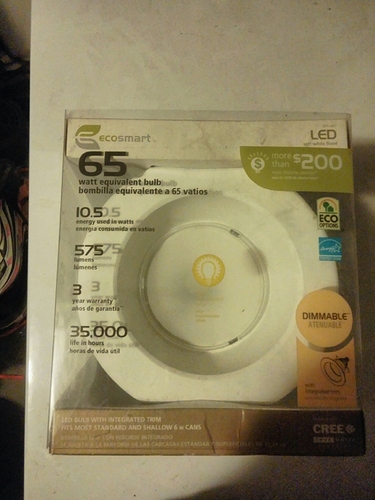 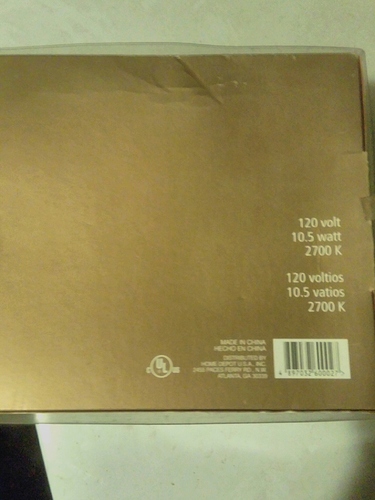 I just scanned the UPC on the Cree dimmable can bulbs I have and it came up with a flock of Pink Flamingo lawn ornaments. So I will just assume that these are no longer available. The ones I have are 10.5W dimmable with the trim attached to the bulbs and work perfectly inside 6" cans.

Thank for this. I am hoping to find the magical light bulb with a regular A19 or BR30 style. If none are able to improve the experience I’ll try replacing the whole can for these. 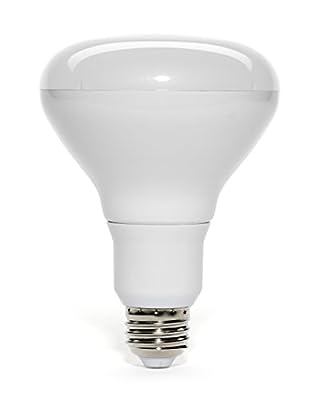 They dim very low and provide bright 1210 lumen at 100%. Customer service is great, too. I sent G7 an email after one of my bulbs did not work anymore after 3 months and they just sent me a new one.

I just scanned the UPC on the Cree dimmable can bulbs I have and it came up with a flock of Pink Flamingo lawn ornaments. So I will just assume that these are no longer available. The ones I have are 10.5W dimmable with the trim attached to the bulbs and work perfectly inside 6" cans.

Thank for this. I am hoping to find the magical light bulb with a regular A19 or BR30 style. If none are able to improve the experience I’ll try replacing the whole can for these.

While mostly off topic, I was surprised to find that these Philips bulbs emit a buzzing noise when just used with a normal non-dimming switch: 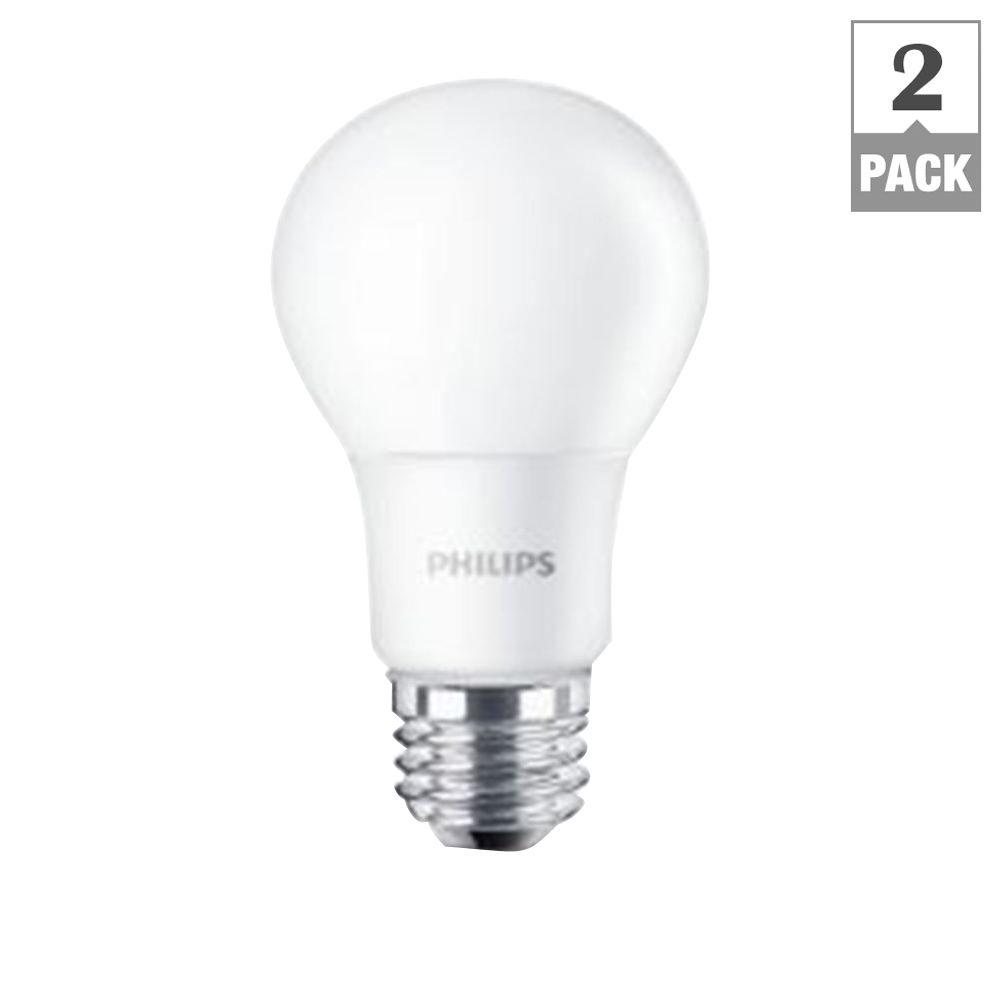 Not really too relevant to the thread, just surprised Philips who are generally a higher quality manufacturer would make a bulb that buzzes in this day and age…

Not so off topic, Benji. I got the Philips bulbs I was using with the GE dimmers because they were “the best” out there. They do work with my Lutron Caseta dimmers, but not so well with the GE. At least in the small wattage that I use.

As an update, I went ahead and got the Ecosmart A19 60W replacement Daylight dimmable LED bulbs (that’s one long name). Wife didn’t let me get a bunch of LEDs and try because “do you want to be coming to HD every day to return something?”…

Anyways, so far these bulbs have worked good with my GE dimmers. There is very subtle hum to them but only if you actually step on a ladder and get your ear close to it. Dimming is very low and they don’t flicker… so far.

I will update if anything new comes along. Remember, this is for a 2 light bulb setup.

@rdelavega If you turn your switch to a very low dim level, like 1%, then turn the switch off for a bit, do the lights come on when you come back and turn it on? In one room if I do that I have to turn the brightness up until the bulbs light up and then turn them down again to get where I want to be.

It comes back to the previous setting. This dimmer has a memory to it. This being said, with my current two bulb setup the lowest the dimming can go is to 16% according to the ST app. If lower than that it will turn off. Don’t know if this answers your question.

May be its the dimmer and not the bulb? I am all Philips house (smart and dumb LED bulbs) and well, even the vintage Casablanca switches/dimmers (think old old fan/lights dimmers) works mostly with those…: YMMV.

That’s the problem, I’m not even using them with a dimmer, just a normal (dumb) toggle switch and they buzz…

I guess it’s mostly irrelevant since they’re marked as non-dimmable anyway so I won’t use them with dimmers when I switch.

They work well and no buzz that I’ve noticed at any brightness.