What are your practical use cases for automation, no "fun" things?

Trying to convince the wife to allow me to buy more Things but she sees everything as a novelty and not really that useful. I’m looking for ideas on what you guys do that make your house “better” than a stand dumb house. I know this is very subjective but in general, turning on the lights for you instead of hitting a switch is more a convenience and probably doesn’t improve your quality of life all that much. :

Something my wife would find practical, looking for others.

You get the idea, things that are not so much novelty and more everyday useful or could save us money/damage.

Obviously security is a big factor. I was just on a week long vacation and it was nice to have lights automated to turn on/off, and be able to check on them remotely. The door locks are great - remotely lock/unlock, automatically lock, provide codes to house/pet sitters that expire, etc.

I’d be worried about how flaky ST is, considering I had lights and music randomly turn on last night I wouldn’t want my doors to unlock or not let me in one day.

I’m not a tinfoil hat wearer but the whole cloud thing weirds be out too. Lights, music, that’s fine but for ST to know (and any hacker who wants in) how to open my doors is not too fun. Same reason I won’t be doing cameras with ST.

We have echo in our house which gives us voice control in the different zones.

We have a disco light connect to a smart plugin switch in each of the kids rooms. We call these the alerts. Instead of yelling for the kids upstairs in their rooms, we tell echo to turn on the teenager alert. The disco ball turns on and the kids come downstairs.

I have the bathroom fans programmed to turn off after, as well as certain lights after a set amount of time being on. My wife had a habit of leaving the house and leaving all of the lights on in our bedroom and bathroom (8 bulbs, a ceiling fan, and two bedside fans). These go off is we are both not at home.

Everything in the kids rooms turns off at the switch when the kids go to school.

The guest room shuts down completely unless someone is in it.

We have the porch lights come on when we arrive after dark, and turn off a few minutes later. When we come in the house after dark certain lights are on. Yes, a simple convenience, but when your carrying a baby and all of your stuff it works best if you can see, and not have to worry about a light switch.

We are in the process of upgrading our voice control and zones sounds alerts throughout the house.

From an outside perspective it may seem that it is novelty and doesn’t upgrade the standard of living. But use it for a while and watch how you feel when the system is down.

A cell phone is really a convenience and a novelty. Take your wife to the library and have her find information about the civil war… Right after you take her phone.

Novelties are what makes quality of life improve… Without them there is just life.

Initial reason for me was to monitor “things”. Lights left on, garage door left up, outbuildings with a door open. I set up a RGB bulb as an alert.

I rather easily achieved those. Secondary was eliminating all my X10 stuff. I have several times devices scattered throughout the house that operate off timers. These were on the to-do eventually list, but the recent close out of items at Lowe’s let me complete all those.

I have an outdoor heated birdbath, but do not rely on it’s thermostat, now using IFTT to control an outdoor receptacle. (GFCI is upstream), changed my landscape lighting to NOT use it’s sensor, but use sunset on, of at midnight. Outdoor spotlights using a switch and minimote and part of the RGB alert light if I leave it on.

What I do not use:
Presence sensor - no need, unreliable.
Security - though may add some push notifications eventually.
Multiple smart bulbs - at present, just no need,most everything already has smart switches.
RGB / Hue / etc - again no need

As I get more familiar with rule machine I plan to tweek more.

Most people have automatic garage door openers that have keypads and wireless controllers that would allow someone access to at least your garage and possibly your home. That is a potential security risk most people are willing to accept and don’t think twice about.

Kind of, but not the same. Picture this, either from someone who works at ST or a hacker who gains access.

Pull a list of everyone with a ST setup and who has a smart lock. Then query those user’s other devices to get their schedule, see what lights they turn on, what sensors go off etc. I now know when they are home and how to get in their house very easily and it’s safe to assume that if they’re spending $$ on cool light switches they’re not poor. I use the GPS data (or the data they provide) to find their address, wait for them to leave and unlock their door, disable the ST cloud (or their Internet) for 15 minutes and take what I want.

Yes you can pop locks or break windows but the visibility of knowing everything about a house just by hitting one server is what scares me.

You’re absolutely right. Again, you need to assess your own risk factors. You could make the same argument about any of your neighbors or friends who live in the neighborhood. I don’t rely on ST for security I have a separate security system. Keep in mind most burglaries happen during the day and they start by the burglar knocking on the door to see if anyone is home. You argument is valid but if someone wants to break in your house they will. ST also has a liability issue if if can be tracked back to them. Same thing for any monitored security company they also know when you are home or away.

Unlocking a door doesn’t mean no security system is on. Many people have separate security systems monitoring the same house where SmartThings is installed. Plus you still have to physically go to the house to get the stuff.

This is my project report from my first phase of home automation. My emphasis was always on practical.

i’ve been working on this over the last year and I’m just finally getting around to writing it up. I’m quadriparetic, use a wheelchair with limited hand function. So home automation isn’t a hobby for me. I want to get maximum return on investment, with a pretty small budget, and I want everything to be working and practical from the beginning. [image] At the same time, my personal belief (and this is just a guess) is that while there will be several good candidates for plug-and-play home automation systems that will do most of what I want for under $5000 by the summer of 2017, The reality is that there is no system yet that will fully meet my requirements. (edited to add we did finally get this by 2019, more details when I get around to updating this for 2020.

I had/have the same concerns you have. You can also just break a window or use a bump key to open almost all home locks. When I was researching smart locks I learned how to make bump keys and practiced using them. It took me about 10 minutes to learn how to open most home locks with a bump key. You need to weigh your risk threshold. In my opinion your odds of someone using a bump key on your lock is much higher than someone hacking it. Just my opinion, I have no stats to back that statement up.

Edit: I also have a second line of defense if someone where to come in my house.

A lock is an deterrent. I’m going to set my system up to automatically call 911 when it detects my gun shots and the sounds of a body hitting the floor.
That home automation right.

Locks are merely a deterrent. I think my 3 (big) dogs barking are probably even more of a deterrent. We used to live in the country and not even lock the doors. If someone wants in, they are coming. However, in a more populated area it’s good to at least slow people down. If someone at ST wants to go to the trouble of finding my house and getting in because they can hack the system, they want my stuff way more than I do. It is meant to keep out the average “criminal” and that’s about it. The benefit of a smart lock is it makes sure it is locked and unlocks for me when I get there.

Using a TV remote control is all about convenience and yet, who can live without one now? I think you have to look at the big picture because ultimately, it’s not really about being able to turn something on with your smartphone or even voice but it’s the automatons that one can achieve and once set up, you shouldn’t have to give it much thought any more. I just wish that things were more reliable.

My mother-in-law is the biggest deterrent! Don’t need no guns or ST!

She can hear unwanted visitors miles away!

My biggest use cases at the moment are:

Turning on and off power sockets for lamps & power strips where the switch or socket is very awkward to get to.

Being able to turn off lights that we may have forgotten to do so when going to bed at night without having to go all the way down to the kitchen (as it’s usually the kitchen light).

I have water and smoke/carbon sensors pretty much everywhere in the house. It’s probably one of the biggest reason why I have ST in the first place. Also automatic outdoor lighting for safety is a big go for the wife as well.

In stream of consciousness format the best xAF in my house:
Laundry Finished Monitor
Notification of kids arriving and leaving home
Bumping temps up when home, cool when away, especially during vacation.
Motion lights avoid tripping
Saving electricity by turning off lights
Showing how much electricity is being used in house
Random vacation lights.
Linking sets of lights so turning one on turns on another and off.
Leak detectors.

Showing how much electricity is being used in house

Brian,
What are you using to do this? 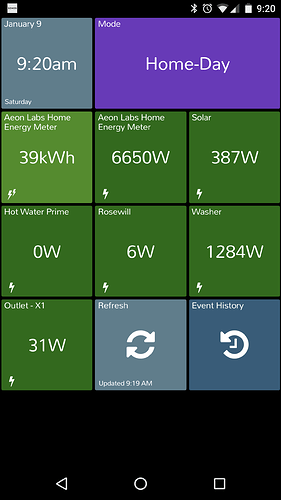