This may seem like a dumb question but I am confused.
I have a number of virtual devices created with Virtual Device Creator. Will these continue to work as SmartThings goes through its update and removes Groovy IDE? Or do I need to replace them all with vEdge Creator?

This will be an open beta, as the driver is not expected to need many updates. Any updates will happen automatically if they are released. Those updates will be announced in this thread, so please watch for notifications. There are some other quality virtual device drivers. The intent of this driver is to enable users to create their own smart apps / devices to enable automations that are not possible with their physical devices. For example, associating a relay/contact sensor to make a door. Follow the invite link below to install the driver. This will create a Virtual Hub in a “No Room Assigned” room within the ST app. You can use this virtual hub to create further devices. Here is a Garage Door Example connecting a relay and contact sensor to automate the door: [5] [9] [4] [3] …

Thanks, your virtual hub looks like a good idea. But my question really was do I have to replace all my old virtual switches etc with edge based ones or will they continue to work when ST has finished its migration?

I have seen an edge version of those in the ST set of drivers for the rollout. I believe they will be converted over, but that’s not official coming from me. I’ve just seen them in the code. If it were me, I’d wait and see, knowing you have multiple solutions for virtual switches and other virtual devices.

That sounds like good advice. Thanks for your help.
But I am still nervous about my house suddenly not working and panicking to convert them all at the last minute!

It’s incredibly frustrating for many of us, but smartthings have still not put out an official response as to what will happen with virtual devices.

Right now there are five ways to create virtual devices.

Right now, the main method that we know will work after groovy goes away is option 4, custom edge drivers. There are several of these. All of them seem to be good so far, each has different features. And there is also option five, which doesn’t require a hub. You can find them by checking the quick browse lists in the community – created wiki and looking for the list for virtual devices.

But what if you created your virtual device on the old platform? The answer is we have no idea what’s going to happen with these.

Although the question has been formally asked many times. We don’t know if they will be transitioned or abandoned. We don’t know what will happen to routines that use them.

We do know that staff members have asked people who raised the issue if they created the virtual device through the wizard in the SmartThings app or through the IDE, but then there was never a follow up response to say what difference that might make.

We also know that under the old architecture, you could create virtual switches whether you had a smartthings/aeotec hub or not, and quite a few people did. But edge drivers only work if you do have a hub.

The question has been specifically asked whether after groovy goes away there will be a method for people who don’t have a hub to create virtual devices, but again, no answer yet.

As @Paul_Oliver notes below, @lmullineux recently added A virtual device which is cloud-based, so you won’t need a hub. But you also can’t use it as both a switch and a sensor so you can trigger an Alexa routine. (This is what people mean when they say “Alexa switch”— A dual capability device.)

So if you do have a hub, the safest thing right now is to replace any virtual devices you have with method 4, choosing one of the edge drivers for virtual devices. But that could be a lot of work and you might not need to do it – – we just don’t know yet! And that option is not available to those who don’t have a hub.

I myself have been asking this question formally for almost a year now. I don’t understand why there isn’t yet an answer, so if I’ve just missed one, I hope someone will post it. But so far I haven’t seen it.

JD, you can create cloud based Virtual Devices using the New Architecture using @lmullineux “Virtual Device Viewer”. The only thing missing is an Alexa Switch. Once you set it up it is very easy to use.

JD, you can create cloud based Virtual Devices using the New Architecture using @lmullineux “Virtual Device Viewer”. The only thing missing is an Alexa Switch. Once you set it up it is very easy to use.

Yeah, unfortunately it’s the Alexa switch version I need. but I’ll look into it, thanks!

edited to update: definitely cool. I’ll edit my post above.

Agreed, I also need a couple cloud based Alexa Switches.

To be crystal clear - these are not my virtual devices.

All I have done is built a web front end on the ‘virtualdevices’ section of the CLI, because i know to some users the idea of the CLI is a little intimidating.

The devices themselves, their usage and capability is all down to the smartthings team.

@JDRoberts you made a comment above that they are only switches possible, actually there is a full list of devices available 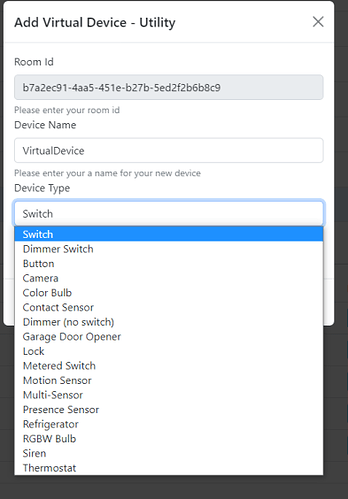 made a comment above that they are only switches possible, actually there is a full list of devices available

Thanks for the correction, I have updated my post above.