Is there a traditional smart switch out there? All I see is paddle switches. Thanks! 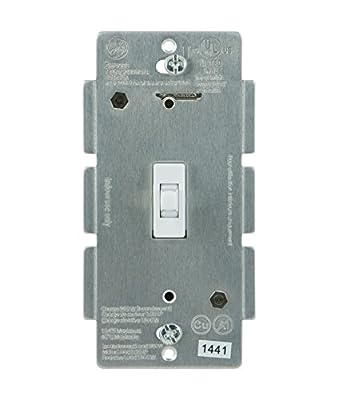 Transform any home into a smart home with the in-wall GE Z-Wave Smart Toggle Switch. The switch enables you to wirelessly control lights turning them on and off, schedule a timed event, or create a cu ...

Sweet. Thanks for the fast reply! Not sure how i didn’t see those.

have you seen anything in 20$ range?

not in a zwave or zigbee switch. Be careful if you search you will find the add on switches those require one of these tow work.

I have a small light in my living room I would like controlled. I had a wemo plug into it but my wife keeps turning the switch off. So, when I try to turn it on with My Echo it doesn’t come on. Can I replace the switch with something like the link below? What’s the difference between an add on and the switch that Matt posted?

I guess you answered my question. Thanks Matt!

If you have two switches nearby you could use a dual relay to control both bringing the overall cost down.

Have you used these? are they reliable?

Curious, is there a reason most switches tend to be zwave based? Like G&E has toggles in zwave version, but not in zigbee. And most of my devices are zigbee, would be nice for switches to double as repeaters

Have you used these?

No, I currently am outfitted with GE/jasco switches, but there are many community members who use these with great success.

Apparently there is a sale on Z-wave devices from Monoprice: http://www.monoprice.com/Search/Index?keyword="z-wave"&ref=cj Has anyone tried any of these–and if so, do they work fine? I know Z-wave devices are supposed to “just work” but it would be great if someone can confirm these ones as working.

So first off I want to thank mattjfrank and chrisb for their initial work on the Aeon zwave power strip and the ZWN-RSM2 I’ve been using mattjfrank’s device type for my Monoprice relays for months, they mostly worked ok but when I added in voice control with my Alexa things got more frustrating because Smartthings I would ask Alexa to turn lights on and off and often some lights didn’t work. Voice control it seems REALLY needs to work a high percentage of the time since you can’t just sit there and mash a button like you can in the app. Eventually I narrowed the loss of current state down to the device type not reporting back when the physical switch was pressed. I spent the last few nights nights debugging and came up with a simple solution that works, I also attempted to clean up the c…

I purchased a ZWN-RSM2 with the hopes on using it in locations that only have 1 hot wire in the ceiling where I’m trying to control fan and light independently. I’m only concerned with on/off on each load as that is the best I’ll get with device types available currently. Without spending over $200 per location. (total of 7 locations) I have been struggling for a few days looking at code searching, reading learning but I just don’t know how to get started. I was able to get this device hooked up correctly (I have it in the fan canopy rather than the switch) I can toggle load 1 via app and via manually trigger at the device, I cannot toggle load 2 via the ST app because there is no device type to handle the request. I can toggle it via the device itself. I need help on where to start cr…

Curious, is there a reason most switches tend to be zwave based? Like G&E has toggles in zwave version, but not in zigbee. And most of my devices are zigbee, would be nice for switches to double as repeaters

Paddle… While toggle ( https://shop.smartthings.com/#!/products/ge-in-wall-toggle-switch-on-slash-off ) is zwave only

When buying the switches be sure to read carefully. There are some Z-Wave switches which appear to be cheaper and they’re really part of a 3 way setup (2 way?). This cheaper switch won’t work without the more expensive switch. I guess the cheaper switch is like a virtual switch that doesn’t switch a load directly but sends something to something else to be turned on. . Anyway I’ve noticed that the advert doesn’t really clearly state that. Lot of mystery with ‘big box’ stores and why one thing is cheaper than the other (ex: a $0.49 125v@15A switch, a $1.99 125v@15A switch and a $5.49 125v@15A switch - like that).

My guess is that inexpensive residential wall switches are zwave rather than zigbee because WiFi doesn’t interfere with Z wave, but can definitely be a problem with zigbee.

When you have a device that can be moved, like a motion sensor, or even in many cases a lightbulb, you have a lot more choices about where to place it. Sometimes all it takes to avoid interference is moving a couple of feet left or right.

Fixed location devices like door locks, wall switches, and window covering controls don’t have the same options. They are where they are and it can be expensive to move them.

So although I haven’t seen anything public about this, my guess would be that most device manufacturers for this low-end market have found they just get too many unsolvable complaints with the zigbee versions.

I personally choose a Z wave doorlock instead of a zigbee one precisely because I knew I would want to boost Wi-Fi signal strength in that area to support some other devices I wanted to put there.

There are some professionally-installed automation systems which do use Zigbee switches, but their installers have the necessary tools to address network interference.