So I have a simple toggle switch that controls one overhead light. I’m trying to replace the “dumb” switch for a smart switch that has dimming capabilities for LED bulbs.

I purchased the Leviton 600w Decora switch ( http://leviton.com/en/products/dz6hd-1bz ), but it requires a neutral wire. However, the box there doesn’t appear to have a neutral wire, only two black wires and ground.

I tried installing it anyway, but as expected the dimmer doesn’t work and when it’s on the bulbs just flash.

I was also told the Lutron Caseta doesn’t need a neutral wire, but that requires the Lutron smart hub.

So there is a good in-wall switch that doesn’t require a neutral wire and has dimming capabilities?

@prjct92eh2 thanks for your response - This one? Doesn’t this require the Lutron “Smart Bridge”? 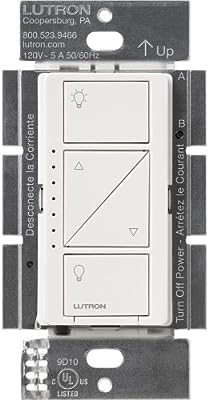 Bring technology and style to your home with the Caseta Wireless In-Wall Dimmer; the dimmer that is compatible with all of today's bulb types, including dimmable CFL and LED, halogen and incandescent. ...

Yes it does to integrate with ST

Right, looking for a zwave type dimmer that can integrate into ST .

That doesn’t require a neutral wire? I have never seen one. I have a situation without a neutral, that’s why I went with the Caseta.

All z-wave dimmers I’ve seen Require a neutral. There is an in wall relay that doesn’t. Otherwise Lutron is the only way.