Thanks all, problem solved

I just need my hallway light turns on when my front door is open between 6pm to 6am, and then turn off after 5 minutes.

Updated to add I did not realize that the official smart lighting feature has added the “turn off after X minutes” option for use with open/close sensors. The last time I looked that option was only available with motion sensors.
.
I’m going to leave my post here, because it will still be relevant for certain kinds of conditions, but in this specific case I think @RottenMutt 's post below will be a better and simpler answer then the virtual timer that I described.

You can do this easily with the official smart lighting feature using the power allowance option, but if you set it up that way then the light will always turn itself off after five minutes, which isn’t what most people want.

There is a slightly more complicated way where you can create a virtual timer for the light and then you set the virtual timer to go off with your conditions as described. It’s way simpler than webcore.

There’s a how to article in the community – created wiki on creating a timer for light which covers both of these options.

yeah, have you found the Smart Lights app in the app marketplace? This can easily be done by that. 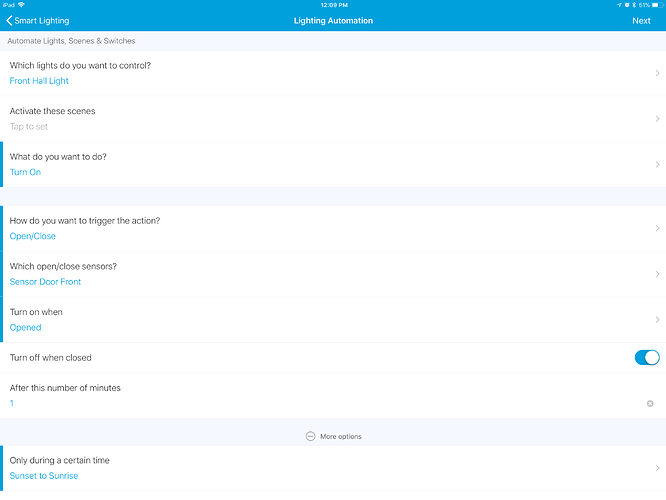 Ditto. Maybe that can be a suggestion…its literally the only think that’s lacking from Smart Lighting for me. Gonna put in a support request for it…can’t hurt.