Sunrise/sunset vs motion: how do you control lighting in your home? Do you use scenes?

I am slowly planning my next wave of automation, so this is more a strategy topic.

Background: I currently have some bulbs, switches used for exterior lights, ring doorbell/alarm. Combo of v3, nest home hub/mini, alexa. (1) Smart things motion. I have actiontiles, but not using it much yet. Thinking of getting rid of google to go purely echo with the new Show 5.

My current lighting automation are pretty basic, only using ST lighting control automation. Not opposed to switching to echo routines, since it seems to integrate with ring alarm door/motion sensors.

As I’m waiting for more inovelli switches to arrive, I think I may have to explore routines/scenes a bit more.

Would love to hear more use cases on how you’ve set up lighting in your house. Do you use scenes/routines? Do you rely on motion more than sunrise/sunset automation? If motion, what sensors do you use/prefer? Purely ST or Echo scenes/routines, a combo? If ever traveling/ away, would love to randomize it a bit.

WAF is the biggest hurdle. When my hub went down in December, thought the end of the world was here. Replaced it with a v3 hub.

I would like to stay away from relying on creating code. Plenty of people here have made some great/amazing things, but I don’t think I have the time/patience for that.

It sounds like you are using the classic V2 app. The new V3 app does not have routines and the scenes have a different set of features than the ones in the classic app. The “custom automation creator,“ the new rules engine, also has a number of new features and is somewhat easier to use than the V2 version. You can also group lights for some purposes in the V3 app, although not much yet. (For example, you can’t use the V3 light groups in scenes yet.)

I just mention all this because since you said you don’t want to code, which I assume also means not writing pistons for webcore, you might want to take a look at the V3 app as the official rules engine is quite a bit more advanced than the one in classic.

As far as what we do at our house, we use a little bit of everything. There are some scenes, like the “bedtime” scene, which we use every day. It turned some lights off, some lights on at fairly low levels, and create a pathway of lighting through several rooms so I can get from the family room to my room all with a single voice command.

We also use motion sensors a lot. There is a dumb occupancy Lutron switch in the laundry room, for example, Which doesn’t do anything except turn the overhead light on when someone walks into that area after dark and turn it off again after a few minutes of inactivity. It works great, it cost $18, we don’t need it networked with anything else.

And of course we have “echo, lights on“ functionality in every room.

So just different options for different use cases.

It sounds like you are using the classic V2 app. The new V3 app does not have routines and the scenes have a different set of features than the ones in the classic app

I am slowly using the new app more. I did have some webcore and device handlers used with the inovelli switches in the past, but haven’t touched them in forever…

Just created a routine to turn on/off an outdoor light when taking the dog out between certain hours using a ring alarm sensor.

Zooz sale switches on their way…

Do you use scenes/routines? Do you rely on motion more than sunrise/sunset automation? If motion, what sensors do you use/prefer?

I use a mix of motion activated lighting, sunset/sunrise related triggers to turn lights on/off, and some stuff that only triggers after motion has been inactive for X minutes.

As a SharpTools.io developer, I tend to use our Rule Engine for a lot of my automations (though I still use first-party automations from SmartThings like ‘Smart Lighting’ that can run locally when it makes sense!) 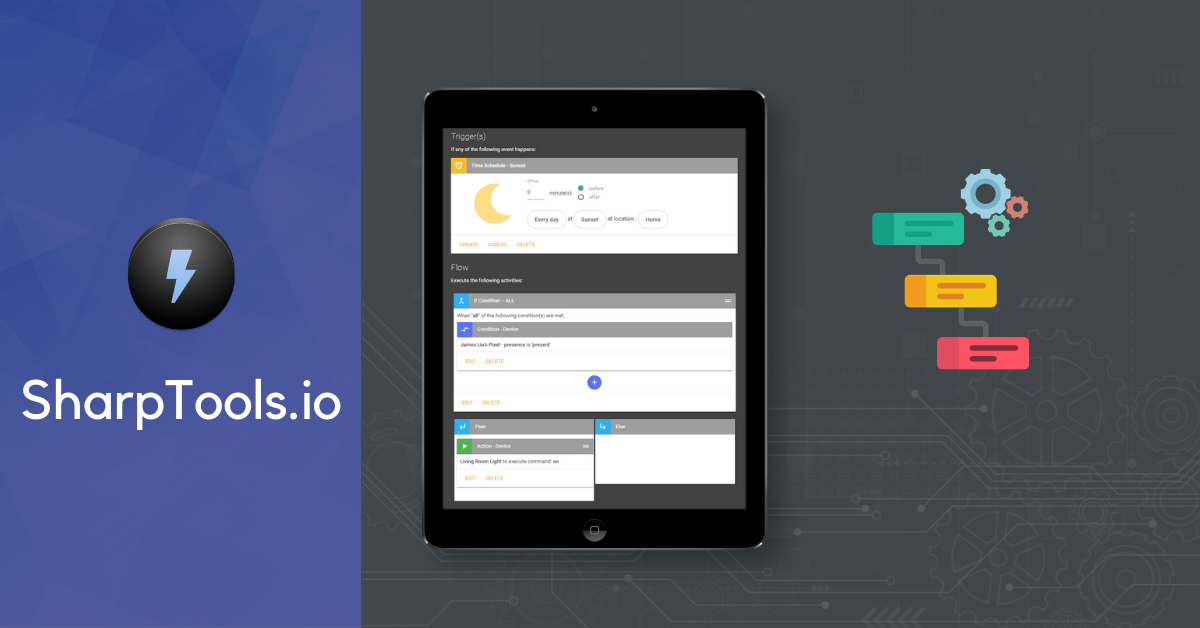 I tend to use sunset/sunrise triggers for exterior lights that I forget to switch on/off on my own. Previously, I would frequently leave the exterior accent lights on all day as I would simply forget that they were on!

Motion activated lighting tends to be used in rooms that we don’t stay in for long periods of time. For example, the laundry light is motion activated and will automatically turn itself back off after 10 minutes of no motion.

I don’t like using motion activation in primarily living areas of the house like the living room, game room, kitchen, etc. as we tend to manually turn those lights on when we enter the room and then keep them on for an extended period of time. (Though having time based automations to either automatically turn the lights off or at least send a notification reminding me that they are on is helpful).

If you tend to have different things that you want to happen with your lights based on traveling / away, it’s helpful to setup conditions - a lot of people do it based on modes, but some people like to use Virtual Switches so they can have multiple modes/conditions active at once.

Motion activated lighting tends to be used in rooms that we don’t stay in for long periods of time. For example, the laundry light is motion activated and will automatically turn itself back off after 10 minutes of no motion.

Great example. Wife is actually asking for this. It’s a 4-way setup, will use some new switches for this. Also need to figure out witch motion sensor to use. My Samsung one drops too often, probably won’t go with that.