Hi all, now I’ve been posting and thumbing this forum for some time and its fab so thanks for the great advise but i always seem to run into problems i.e compatibility issues along the way.
So id like to ask you all which direction i should go as i really need to build then best smart home solution for me without buying products then testing then realising its not what i thought it was.
So forget what gear i already have and i would like to tell you what i would like and whether its possible.

First thing is lighting… i would like to keep the flexibility of smart bulbs so i would like wireless switches that are dimmable and able to set scenes but would like these to work locally just incase the internet goes down or i have problems with the hub.

I also like to idea of a dashboard on a tablet as a main controller so ideas on different solutions would be great.

Think thats enough to be going on with.

Thanks again in advance for your thoughts. Kev

First off, what country are you in and do you already have a smartthings hub? If so, what exact model is it?

Also, do you have a preference as to which version of the SmartThings app you use (V2 classic or the newest V3) as they have somewhat different features.

Finally, by “wireless switches” That work with smart bulbs, do you mean switches that are not connected to Mains power? Because I’m not quite sure what “wireless“ means to you in this context.

As far as smartbulbs that work with their switches even if the hub is down, I think the simplest easiest choice is just the Hue system with the hue bridge. It will integrate well with smartthings but also works very well locally on its own. ( The Sylvania battery controlled dimmer switch could continue to dim joined zigbee bulbs if the hub is not working, but it doesn’t do scenes The way the Hue compatible devices can.)

If you want a tablet controller that will work locally even when the hub is out, you will probably have to go to Apple’s HomeKit. Combine that with the Phillips hue bridge and you have a system that will continue to work regardless of what smartthings is doing.

All the dashboard controller systems that work with smartthings are cloud-based.

Hi JD thought you’d be the first to reply to my post,you must live on here.

Sorry I left that info out.
I live in the uk
I already have the hub v3
I’m using both apps but I’d like to know the pros and cons to both.
Yes I ment battery operated switches.

As far as the two apps:

The biggest con to the classic V2 app, they’ve already told us that it’s going to go away at some point, they just haven’t said when.

The biggest pro to the V2 app is that it supports more custom code.

The newer V3 app has a nicer rules engine in the official features. And it can work with some devices, like Samsung smart televisions and refrigerators, which V2 app does not.

I don’t think the dashboard working locally is a big issue as long as I have a lighting system if I lose internet. Do you have a cloud based dashboard favourite.
Can I ask what you use for your lighting setup.
I have 5 lifx lights and I really like them and it would be s Shame to get rid of them as I find them better than the hue lights.
Have you any thoughts on the niko range of battery switches that run with the hue bridge.
So are you saying I should run my lights through the hue bridge and run everything else through smarthings or

I use devices at my house that are not available in the UK, so I don’t think that will help much. I do use the Phillips hue bridge and like it very much.

The new Niko range are “green power” kinetic energy switches. They don’t run off the mains, but they don’t need batteries either. I like the look of them and I like the technology, I just don’t know anything about those particular models yet, they are very new.

If you like the LIFX, that’s fine. So as always different things work for different people.

I can’t control the lifx lights though locally as far as I know useless you can advise me otherwise.

I’ve just picked up a Niko friends of hue dimmer switch. Does anyone else have this dimmer?
Now my first thoughts are cheap,the switch doesn’t feel premium for the price and the plastic feels cheap.
Now I bought this along with the Phillips hue hub so that I could run smart bulbs with this switch locally.
Now I’m having second thoughts as the switch is a let down over what I was expecting,does anybody know a better made light switch that can do what the Niko can do.
I don’t have to use hue products but I need the switch to work with smart lights.
Many thanks kev

Those are brand new devices. There are a couple of other choices in the UK using in the same protocol with the hue bridge. I know Vimar has a line. You can get at Amazon.co.uk 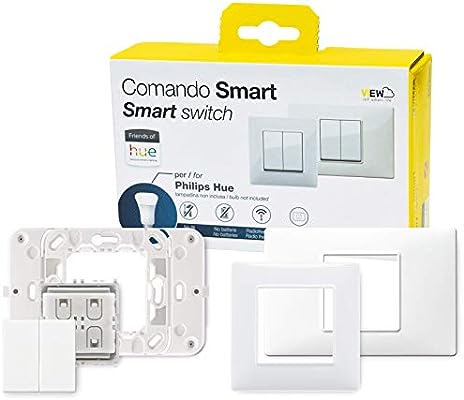 Feller has a line, but I haven’t seen it sold anywhere yet

I haven’t seen a head-to-head comparison of these on build quality yet, though.

Hi JD,yeah I like the feller ones but can’t find a UK supplier.
The Vimar switches I’m told suffer from quality issues as well but that’s only what I’ve been told.
There’s Phillips hue dimmer and tap if I could make a custom panel to hold them so that’s an option. Such a shame the wallmote didn’t work out as I thought the build quality was good.

There are now several cover plates made for the UK that will cover the existing switch and hold a Hue brand dimmer switch or Tap on top.

or of course you can make your own. 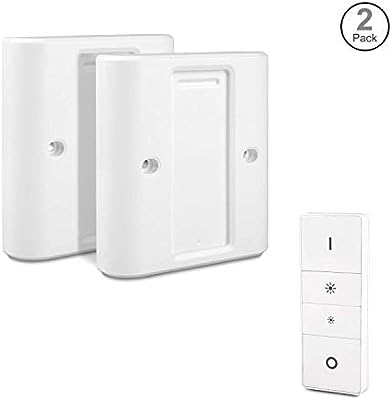 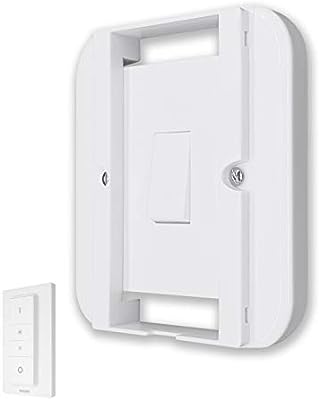 These do have slightly different looks and features, particularly in how quickly you can get to the original switch underneath.

There are also some made for Tap, although these are more easily found on Etsy. 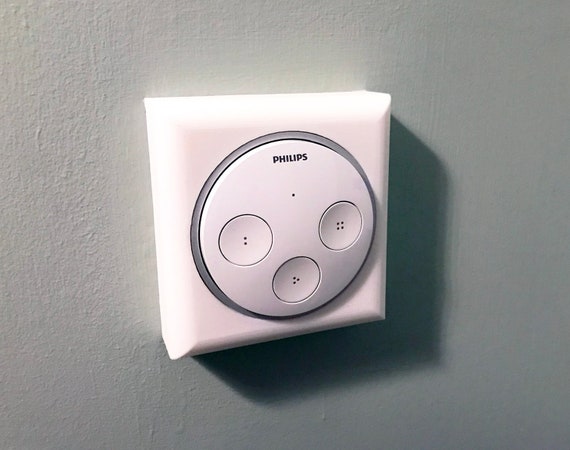 Custom printed UK format Light-Switch cover for Philips HUE Tap. This cover bolts on over the top of a standard 1-gang light switch, in UK pattress format. It allows access to the switches beneath, and requires no electrical knowledge to fit. Simply...

But there are several. At Etsy, many items are made one at a time on order, so may cost more and have slower delivery than factorymade versions. But it can still be a good resource.

Thanks For the info JD but I’m not sure I like the look,they look really bulky.
Sorry for being picky but I’m a bit funny like that.
If I went with the dinner I’d need four of them to fully control the each zone so four of those plates side by side wouldn’t look right. Where if you had the remotes nearly touching each other they would look better.
Do you know if the tap has dimming on each button.

Everyone has their own aesthetic preferences.

The point is just that there is quite a bit of demand now for this type of product, so you may be able to find one you like. Or you may have to make your own.

On the tap, each of the four pressable areas represents one scene in the hue app. No dimming.

Thanks I’ll have a look at that wall plate
Have you used the hue dynamic app with the tap as it says you can setup multiple scenes,toggle,single press or hold.