Is there a trick to getting ST to recognize my Echo? I have enabled the skill in the Alexa app and the Echo will recognize all of the items on my ST hub, except the hub. The Echo will perform tasks (shut off lights, etc) but I cannot get ST to find Echo, nor can I figure out how to manually add it to ST hub.

I have installed Echo Speaks and was planning to use it with WebCoRE to start doing some things like yelling at the kids for leaving doors open, etc.

I’m confused about what you’re asking for.

Similarly, echo will not show up as a device in your SmartThings account because it is not directly controllable.

As far as using echo speaks, that’s going to work because you will set up an Amazon Heroku developer account to control the echo. You can do that if you want, and it used to be a very popular integration, although technically quite a bit of work to set up.

The following community FAQ explains how to do that if that’s what you want:

Or you can go ahead with echo speaks, which can do a lot more, and there will be lots of people who will help you with that. You just need to ask in the right thread.

Did that help any? Sounds like you’ve got a good start if you have your SmartThings devices showing up in your echo app. It’s just a question then exactly what you want to accomplish as far is the best way of doing it.

You hit it exactly. I missed the Amazon developer account part of the whole thing in the beginning. You’ve given me some more stuff to look into and consider.

Thank you very much for the detailed and very helpful response. I’ll dive back in and see which route I want to go down. I’ve got some reading to do! Thanks again.

You were spot on until that part JD. My Echo Devices do show up as devices in SmartThings using EchoSpeaks.

EchoSpeaks Rocks! It will do exactly what you are looking for. Not “too” difficult to setup… 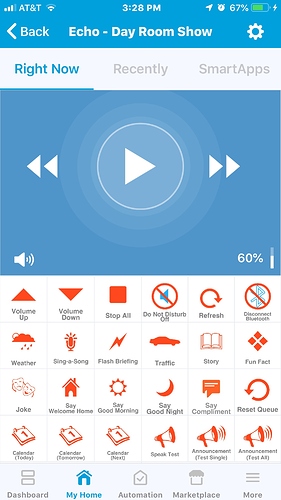 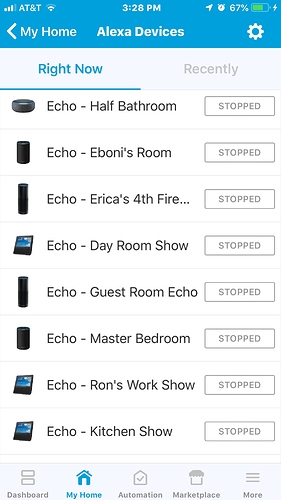 Those aren’t the real devices, though. Those are virtual proxies which are created by the echo speaks project.

I know it looks the same if you just take a snapshot, but behind the scenes it’s very different.

From the echo speaks documentation:

The main point being that you don’t just add your smartthings hub to your echo account or your echoes to your SmartThings account.

So the OP’s description:

but I cannot get ST to find Echo, nor can I figure out how to manually add it to ST hub.

Is never going to happen. And doesn’t have to.

Instead, when you get the echo speaks smartapp set up the way you want it, you will have created virtual representations of each physical echo which will show up in your smart things app.

But your smartthings hub still will not show up as a device in your echo app.

I know it’s confusing. It’s one of those “any sufficiently advanced technology is indistinguishable from magic“ kind of things.

Ok, well that was the impression I got initially when I looked into it. So I must only be missing signing up for an Amazon Developer account then? Because I think everything else went according to plan on the install from GitHub (this was only my third time doing similar, so I am still very new).

And that was what I was expecting too, not an actual controllable device but for it to “show up” as a thing.

Again, the point is just that you aren’t actually adding the device. You are creating a proxy for it and then using a cloud service to support the integration.

Yup, there ya go. I didn’t read it all the way through. I missed the “other items” on the requirements page and also assumed I was done when I set up the smart app (which never finished correctly, obviously).

I will get on the setting up a Heroku account next.

Yes, I get your point, JD, about it being a proxy for it too.

Can’t argue with none of that!

Just want to reiterate what was said by the initial response…very easy to do in Alexa routines. I even have alexa remind the children to wash their hands when they exit the bathroom. Takes about a hot minute to set up in the Alexa app.

I even have alexa remind the children to wash their hands when they exit the bathroom.

Are you using a contact sensor “opens” trigger for the Alexa Routine?

Hi, I’ve got a motion sensor. I tried to use it to turn on the light but takes too long. Short hallway with two options and may not always be the bathroom. I put the sensor in the bathroom to turn off the bathroom light when no motion detected. When motion detected have a wait step then phrase. Also, have a “gotta go” routine for my youngest so when he says that phrase Alexa reminds him beforehand and turns on the bathroom light. He can use the double reminder when he leaves. Effectively I’ve outsourced my nagging.

Persistent rumor in the Amazon developer community is that it’s because there are so many cheap Wi-Fi switches sold for use with Alexa that do not report status when turned on manually at the wall. So they couldn’t work as triggers with routines. Like TP Link. And they just don’t want to get into the customer support headaches about why only some switches work.

Can’t say if it’s true, but it does make sense.

Thank @JDRoberts. It does make sense, however it kind of sucks for those of us with hubs that do support status updates. Oh well!

You can create a virtual contact that mirrors on/off of switches by using webCoRE.

@JDRoberts, isn’t there a way to add the the contact capability to a switch/dimmer so the switch also populated as a contact in the Alexa App?

You can create a virtual contact that mirrors on/off of switches by using webCoRE.

@JDRoberts, isn’t there a way to add the the contact capability to a switch/dimmer so the switch also populated as a contact in the Alexa App?

.
Not really something you want to do for the physical switch.

Instead, have the physical switch turn on a virtual switch which is also a virtual contact sensor.

Okay this is a cool and very helpful idea! Yeah so I noticed that about the TP Link not reporting correct status for switch if you turn it off at the wall. I was using a Geeni switch but didn’t want to write a device handler. I’ve got enough specs piling up on my inbox at work right now but maybe later. So I switched it out with TP Link to get something ST supported that would come on faster since it doesn’t have to go to the cloud. Super fast now with ST automation versus using the Geeni switch in a routine through alexa triggered by the ST sensor. Was having it go off with no motion but people were getting stuck in a dark bathroom with me yelling “wave your arms!”