Very sleek! I would like to flash mount one, but I don’t want to open up the walls…

When I get to it, I will mount an Android tablet that will double up as a picture frame with Daydream mode. When screen is tapped, it wakes up the tablet.

Very sleek! I would like to flash mount one, but I don’t want to open up the walls…

When I get to it, I will mount an Android tablet that will double up as a picture frame with Daydream mode. When screen is tapped, it wakes up the tablet.

Below is our kitchen tablet. I think we got it before we got SmartThings, but with ST it’s way cooler. I spent a bit of time researching all sorts of mounting options, but then eventually chose a relatively cheap OEM Samsung tablet dock which has been perfect for our application. It’s small and out of the way. It’s a 10" mid-range model that we got at Costco.

The tab has its own Google address and we use it as: 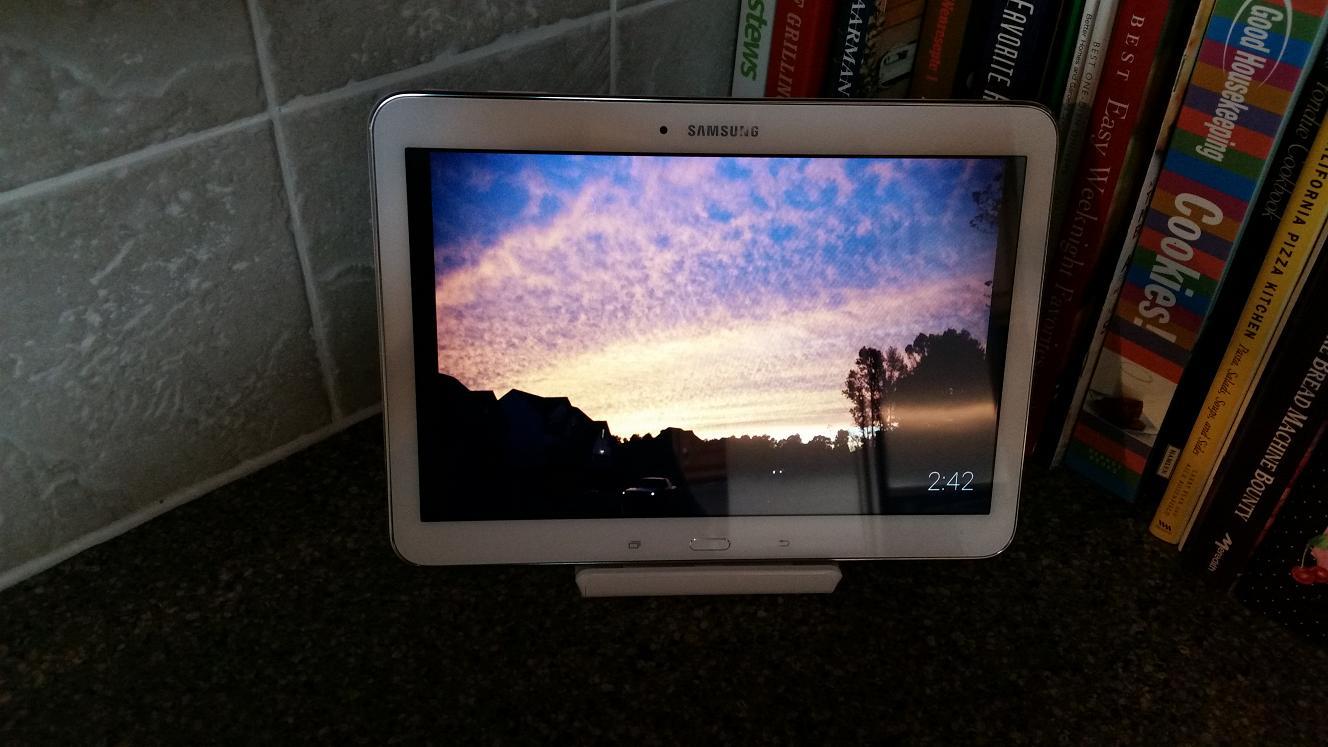 Love this! how’d you get the mini mounted in there? Also what is the paint product? The Krylon Fusion for Plastic?

why turn off when fully charged? Should a modern device be able to manage its own battery?

why turn off when fully charged? Should a modern device be able to manage its own battery?

I’m not a chemist, so I don’t really know the answer. I’ve read that modern batteries don’t like to be fully charged all the time, and the battery lasts longer if never fully charged or fully discharged. So charging it between 20%-80% is probably even better. But at the very least I’m saving a bit of energy

@ccitarella If you take a look at the pics I created a frame to frame it in the wall. If you have questions let me know. I did use plastic fusion for the paint however I then wet sanded and polished it to get the plastic look.

You are saving about a dollar per year when not charging your tablet, but your smart outlet would use more energy. Also, you need to invest into smart outlet itself.

Hi! I have Smart tiles installed on my Ipad, and created a direct icon from the ipad home. I press it and leave my smart tiles open. Then I can lock and unlock the screen and it opens still on the smart tiles web dashboard. I have my ipad mounted on the wall with magbak (awsome), then is a very clean install. Since the screen is locked mosted of the time the ipad battery is lasting almost 2-3 weeks, with low usage offcourse. So I can afford every 3 weeks charge it over night with no problem. I will upload a video in the afternoon.

I did the same thing with an old iPad 2 and a wall mount. I actually just set it to never turn off the screen and hard wired it to the wall. Cost me $29 for the wall mount. Looks 10X better than anything else I have seen out there.

got any pics of your setup?

Where did you get that wall mount/MagBak ? I think it looks cool for something so simple and doesn’t look obtrusive when the device isn’t on the wall.

I’ve had a look (quick look granted) on amazon.ca but couldn’t find them ?

I found them on amazon.com but not .ca there goes the exchange rate and shipping killing it !

Here’s what I found…

MagBak is a minimalist mounting solution for your iPad. Mounts iPad to your car, kitchen and anywhere else. Snaps, protects, and grips your iPad.

Finally finished my Flush mount for my iPad Mini.

I have an iPad 3 that I want to flush mount like this. I currently have my iPads hung in 8x10 picutre frames with power behind.

I know you are using an iPad mini but I am curious how you came to the dimensions to cut the hole in the wall. How much wider and taller did you account for when cutting the hole for?

Just a quick comment regarding the tablet charging 100% of the time. You could utilize a GE smart things compatible plug-in and schedule it to switch off periodically. The duration of “off time” could be adjusted based upon battery life.

It’s likely that you could kick it on a few hours each night, but otherwise leave it off.

Hello how are you connecting the face plate to the enclosure?

Great work. What material did you use for mounting frame and exterior frame? Also, how did you attach the front frame?