A few weeks ago I’ve experienced system instability mainly with my zigbee devices. After working with support to troubleshoot the problems, their solution was to install “non-local device types” for my failing motion sensors and to disable the local processing on my account. After the chat session ended, I was able to confirm that non-local device types were installed for two sensors, and also that I no longer had any apps running locally.

For almost a week I had no problems with my system, everything was working properly. I noticed a little lag, but nothing significant. However Saturday, my system started acting up again. My presence sensor is arriving without leaving, some of my light automations just don’t work - even if the individual devices are functional.

A quick check in IDE showed that some apps are now listed as running locally (even some flagged as “Beta” in Android that “not yet supported for local execution”). I thought that if I go in and change more devices to the “non-local” versions the problems will go away, again. Well, I had no luck finding them. They are not available as templates, not available on GitHub. @slagle, would it be possible to make them available for public somewhere, so I don’t have to chase support? I have non-local for motion sensors, but this weekend I had problems with multi sensors. Also, is there a way to disable the local processing altogether while things get worked out on your end?

Here are some screenshots: 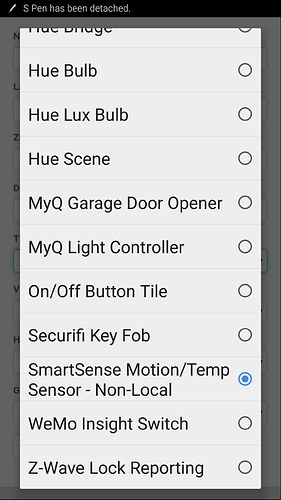 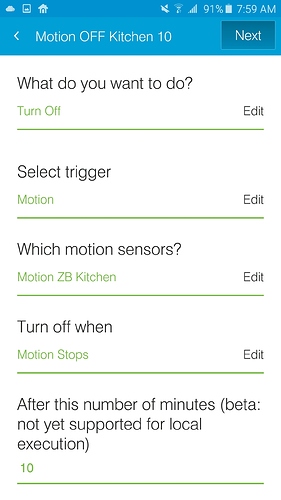 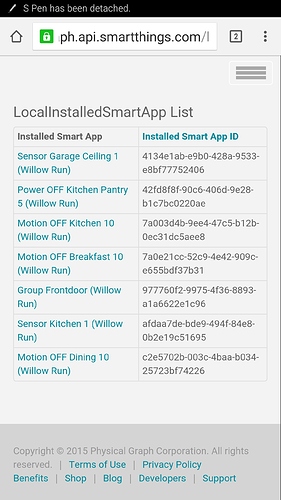 I was fortunate enough to catch the support folks on chat during my lunch break and my lights are back to normal! Here is what they did. Many, many thanks to support for being available on chat!!! 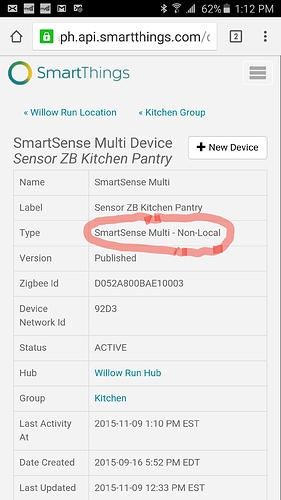 And disabled my local processing: 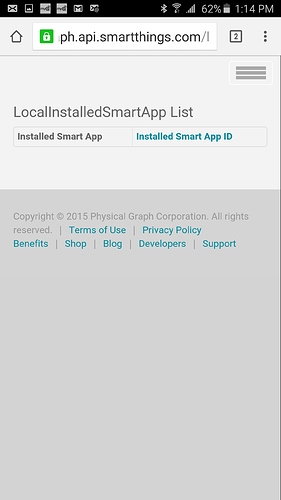 Any device you copy and publish yourself will be a cloud device. That’s how I do my testing. Just switch between the official device and the same device code i published myself.

Or is there something else that support does to “disable” local processing?

Support doesn’t have a magic button that can disable all local execution for your hub. What the meant by that is they did basically what I was talking about and switched your device to a device that doesn’t execute locally.

It’s good to know now, in case I have problems again, I just change the device type and that would kill my local processing.

Exactly. Once you switch away form the official device type to one you published the execution of the app/device will be put to the cloud.

For a little more clarity there are 3 things needed to run an app locally.

I would love to see a report in the IDE that shows every device, and whether it means #1, #2 and #3. Just a high level check list. Show me what theoretically is “ready for local processing” vs whatever may “require cloud”.

Would be a really cool tab, shouldn’t be hard to build either.

I would love to see a report in the IDE that shows every device, and whether it means #1, #2 and #3. Just a high level check list. Show me what theoretically is “ready for local processing” vs whatever may “require cloud”.

Would be a really cool tab, shouldn’t be hard to build either.

Great idea, you should add it to the IDE requests thread:

As some of you already know, I recently became an employee of SmartThings. My job is to improve the IDE. Since I started as a community developer, I have my own list of issues that I’m hoping to improve. I would also like to hear from you about the problems you run into. If you can split individual issues into separate posts, that would be ideal. If you agree with something someone else has posted, hit the heart icon. That will help me see which issues affect the most people. I can’t promise to fix everything you tell us for reasons that are familiar to devs everywhere (time involved, priorities, etc). But I will address everything I can. Issues from this topic Console Logging Sortable tables Coming Soon Consistent wording (Device Type, Device Handler, SmartDevice) Link from devic…

( that thread is monitored by the SmartThings staff responsible for the IDE UI.

Wouldn’t really say that’s an IDE issue, but I see no harm in throwing that on there anyways.

I’ll do as you suggested!

It’s for IDE feature requests, too, not just bugs.