For years now I’ve been using Brian Keifer’s brilliant “Smart Bathroom Fan” SmartApp. This app uses standard drivers to pair together bathroom humidity sensor(s) with a bathroom fan. The idea is to keep the fan running if the humidity is a certain percentage (user settable) different from the running average. It’s worked wonderfully in my bathrooms to keep the humidity down when someone takes a shower.

As we go into this next phase of smartthings, it’s unclear if that smartapp will continue. Does anyone know of a replacement with the new round of smartapps and edge drivers?

different from the running average

I know that requirement isn’t available, but here’s a routine I use with a humidity sensor and a shower fan. Even though the auto off is set for 5 minutes, it never actually shuts off as long as it’s above my setting. I’ve been running this routine for all our bathrooms for as long as I can remember. 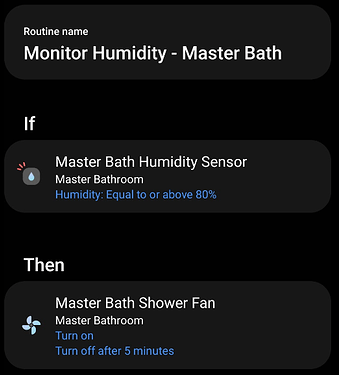 it’s unclear if that smartapp will continue

It is the free SmartThings groovy cloud hosted by Samsung that is being shut down, so ALL custom smartapps that run in that cloud will stop working.

Thanks - I came up with something similar as well – I just really like how it deals with the running average. It gets humid here in the summers, and so just saying “if above 80%” will sometimes cause the fan to just run on its own.

Yes, I was hoping it would get ported to using the new API since it does computations that you really can’t do with just basic automations, but…

Yes, I was hoping it would get ported to using the new API since it does computations that you really can’t do with just basic automations, but…

Sure, you can set up your own server and run it there, but that’s a lot more work than most people are interested in.

Still, I have my own servers and operate a few things on AWS lambda… I might give it a go. Can’t tell you how convenient the damn thing is.

I know it’s not the same as the smartapp and it’s a little convoluted but I was able to set up a rule in SharpTools that compares the current humidity against a 10% increase to turn on my fans. To do this you’d have to get the paid version to access variables.

Ah - more reason for me to get into SharpTools deeper. Thanks @Terri_Baker