Exactly! V2 has Bluetooth, but it is not currently in use. At least not that I have heard about.

That said, the local parts will continue to function (including any triggered local automations), with or without interne

Glad to know the chain of command won’t be broken.

With regards to the “split” execution, there are certain messages for some devices that we choose not to handle locally (right now), and the reasoning for that is mostly flexibility

While I am supportive and in favor of flexibility I am curious why did the design consideration change to split between cloud and local execution rather than the original design path of issuing micro updates to the firmware to update just DTH’s?

A variety of reasons that I’m not going to discuss externally. There have been a lot of discussions about the best way to solve the challenges around local execution, and what we have now was the compromise we landed on for the time being. But local execution is something we are working to improve.

Question: Is the fact that this unit is “Thread” significant?

It helps to understand a bit more about what “Thread” is, first…

Thread is an IPv6-based, low-power mesh networking technology for Internet of things (IoT) products, intended to be secure and future-proof. The Thread protocol specification is available at no cost; however, this requires agreement and continued adherence to an End-User License Agreement (EULA), which states that "Membership in Thread Group is necessary to implement, practice, and ship Thread technology and Thread Group specifications." Membership of the Thread Group is subject to an annua In Ju...

Question: Is the fact that this unit is “Thread” significant?

Probably not, but no one knows for sure yet. The V2 hub is already advertised as being “thread – capable,“ and has been from when it was first released.

Does this mean that they are positioning themselves to take over the Google/Nest division?

No. See post 10 above for discussion of the differences between thread and Google thread: they are not the same protocol.

There are two completely separate Threads at this point. “Nest Thread” remains proprietary to google/nest. However, about 3 years ago Nest donated rights to an open source version, now called just Thread and managed by the thread group, of which Samsung was a founding member. https://www.threadgroup.org https://www.threadgroup.org/thread-group#OurMembers [IMG_5162] So far only chips have been certified, but there are about a dozen different ones, including from ARM, NXP, and SiLabs. Same frequency as nest thread (but then, so is zigbee), but a different protocol. Eero and Legrand are supposed to both have projects in the pipeline: https://www.threadgroup.org/news-events/press-releases/ID/177/Thread-Group-Sees-Strong-Adoption-for-Networking-Protocol-Across-IoT-Ecosystem None…

Does this mean Thread instead of Groovy?

Groovy is already going away eventually. This is discussed elsewhere in the forum. Not because of this device, but because the backend platform is changing.

If they do take over, does this mean that Samsung is positioning themselves as an end-to-end IOT provider?

They aren’t taking over anything google for the reasons given above, but they already position themselves as an end to end IOT provider through Artik. Nothing to do with this new device.

I know that there are no answers to these questions, but it’s something to speculate about.

There aren’t many answers about the new device, but there are answers to some of your questions.

A new outlet was added to the FCC in early Juy. The fingerprint has already been added to the smartpower device handler too.

Well it’s happening! Official reveal at the unpacked event on the 9th?

unpacked event on the 9th?

Yeah, I think they packed the tracker and the wifi hub in the Note 9, the most powerful smart home hub, I mean phone.

Who said it was strictly a phone event? They could unveil multiple pieces of hardware at one event like Apple does.

Yeah, they did it before. So everything is possible.

nope, but Galaxy Home will work as a SmartThings hub whenever it goes on sale. 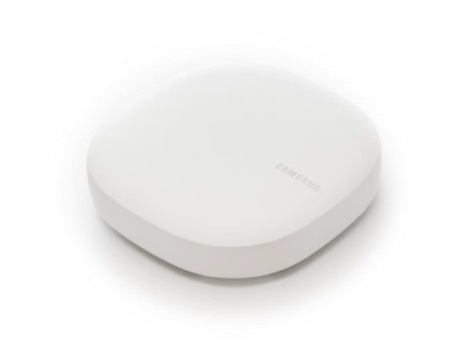 A connected smart home hub used to control a variety of Z-Wave sensors for home automation.

A connected smart home hub used to control a variety of Z-Wave sensors for home automation.

Didnt they say the Galaxy Home speaker has SmartThings built in? I would assume that is V3

They did. The hub in the FCC link the OP posted is similar to V2, though. Even follows the same model number scheme. And it’s stand alone.

I hope the hub always stays standalone as I do not want to have to upgrade a TV, or a Fridge, or an ugly speaker hard to place around the house. I prefer it be something I can upgrade as often as they release rather than something I have to budget when it makes more sense. Do most of you replace your fridge or TV every time there is a new generation?

Samsung (and even SmartThings a long time ago) has made no secret that they envision the Hub as being essentially just software.

Any smart appliance or TV or gaming box or security panel has sufficient processing power to be a “SmartThings Hub” - just add some cheap ZigBee / Z-Wave / Thread / (Bluetooth) chips.

An “upgrade” in most cases will just be new firmware.

This philosophy may also explain why the platform is cloud centric: The more that runs in the Cloud, the less complicated the firmware is for dozens of possible edge host hardware.

For Samsung it is a great strategy to get the basis of their connected home ecosystem in as many homes as possible… Imagine how many will potentially adopt an ST home automation ecosystem simply because they unintentionally already purchased it baked into their appliance however I don’t agree with it being a good long term solution for users wanting to stay abreast of the latest technology unless things change dramatically (meaning you don’t have to buy a whole new appliance to move forward).

If I can make a wild comparison: I purchased a car in early 2000s that had GPS baked into the car. That GPS system was obsolete before the car was even released (Mazda RX-8) and since I kept the car for over 10 years, I had to put up with old technology (slow!!!) for a decade. I always was of the opinion that car manufacturers needed to give the users a way to upgrade the brain so that you can partially update the car without having to replace the whole thing. In comes Android Auto… and now, even though both our new cars have Navigation, voice control, and internet streaming music baked in the car, we exclusively use our phones for those purposes. This way we get to enjoy the latest advancements in technology without having to replace the cars. Speaking of which… where is the line for the Note 9

Either way, I understand that if things keep going in the same direction, devices might end up skipping a local hub and going directly to the cloud making local hardware nearly pointless… but as long as there are local mesh networks and real advantages to local processing (speed/reliability), I will hang on to by little HA hub for dear life