Center of green tile does dismiss alarm but dismiss button does nothing. And yes multi attribute is blank as well as background color behind status. 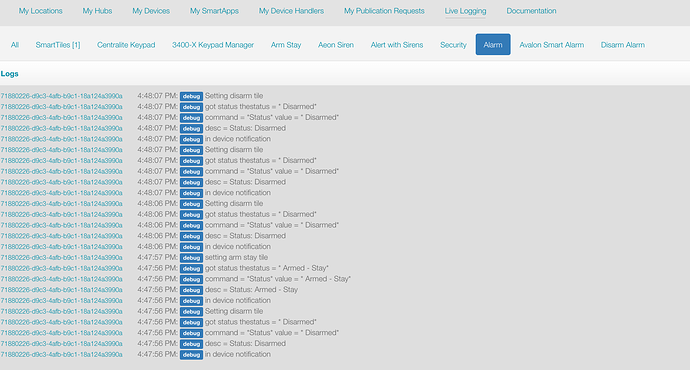 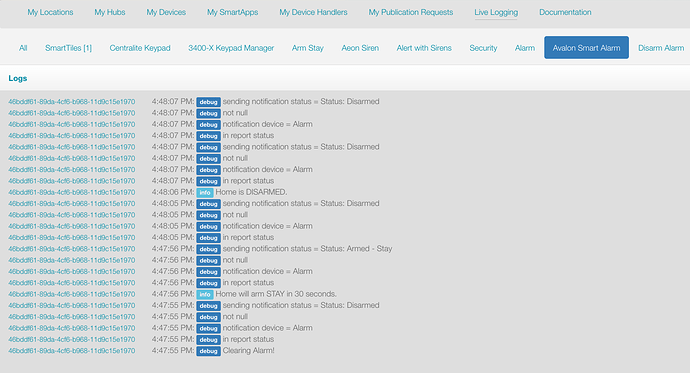 Yes have gone out of app by force quitting then reloading. As far as the multi attribute tile not as important as colors behind status. And since dismiss works from center the dismiss button isn’t needed but would be nice. Also on water alert the wording is cut off in the icon.

The colors behind the status tries to show but is gone in a split second!

I put a version up for ios for the notification device where I changed the value tiles to standard tiles… see if that works… I don’t like it because the text is not centered and looks like crap… not sure why the tiles are not working in ios.

the cut off wording is a function of your phone and or the multiattribute tile in ios… works fine for me… there are multiple bugs in the system and we have not control over text size… if we get everything else working you can report it to smartthings… I believe the missing secondary control is also a bug in ios… you have the latest version of the smart things app loaded correct?

Yes I will try the other version but wish this one worked it is very impressive. I never had a problem with colors behind tiles. I think it is something to do with the lite and unlite commands.

probably… I will change so that the value matches the states and see if that works… also for now I added the textual arm status back so that at least in ios you can see the current arm state since currently niehter the colored tiles or the multi attribute secondaery control is working.

the problem is I don’t actually want a value displayed… because the button value should always say disarmed etc.

OK this version works . If I have an alarm and press the little dismiss button it clears and says OK but if I try to send another water alert it doesn’t allow it for about three minutes which I think that is what it should be doing. Just wish the icon would show the full text. Is there a way to use the text from before with the icon in background?

As far as the multi purpose tile, you will have to send to ST as I have nothing to show them. But I think that is an IOS problem that was created when they did the last IOS update.

@liztupper @slagle @jody.albritton I’m surprised that there’s no release notes for 2.0.8. True to form it would not a be a ST release if something working didn’t break (I feel like a guinea pig - for heavens sake please go out and hire a good IT firm to do regression testing before making a new release. There are some awesome ones who will guarantee 0 regression defects in production, if you need references please ask). Coming back to the issues: NEW THINGS BROKEN: 1 - ValueTiles used to allow for 2 lines in 2.0.7 now it doesn’t when it’s the first tile in a row (and it’s messed up the UI). This code used to work perfectly in iOS 7 ST iOS release 2.0.7. valueTile("battery", "device.battery", inactiveLabel: false, width: 2, height: 2) { state "battery", label:'Battery\n${currentVal…

Yes That is what I thought. Will you be able to keep the pretty icons with text under or across in the large tile? Maybe don’t change the multi attribute for a while as they are working to fix this. That way it will be ready without you playing again.

I also added the actions back in see if pressing it on alert still works.

OK notedev.groovy doesn’t work which version should I use?

Is the multi Attribute tile still active so when ST fixes it it will start functioning? And thanks for the great work.

no you cannot have both… if you want the text to work… and not wrap use this version… I will update next time they release a new version it is commented out.

I am using that version which is commented out but the water alert is cut short so do I have the wrong one I used the IOS one.

Thank you so much for the great work, it is a shame ST screws something up everytime they update,

Out of curiosity what is this Alarm with arrow on top of green tile. If you click the arrow it goes to another duplicate Alarm page. If you do it a number of times to get back to things you have to click it as many times as you did the other way. 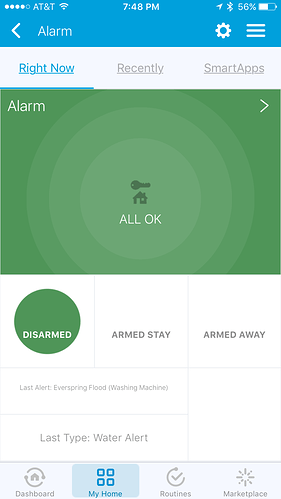