Thanks, I understand but intruder insted of leak is just a tile change I hope.

Alert fixed so warter, fire and intrusion show correctly.
Other changes
As outlined added switch capability to the notification device.
The switch tile is blank and lights up when there is an alert. See pictures below.
When you turn off the switch the smart alarm smart app gets the notification and clears the alarm. But as mentioned if you leave it armed (ie don’t change state) and the alert zone is still tripped it will re-trip etc.

Also change the tiles on the notification device as requested. The arm status still will show in the multi attribute tile (hope they fix the too small font as was told they would in next android release)
but the statuses of disarmed, armed stay and armed away now also show up in 3 tiles. The current status will light up in the correct tile. You will need to update both the notification device type and the smart app. 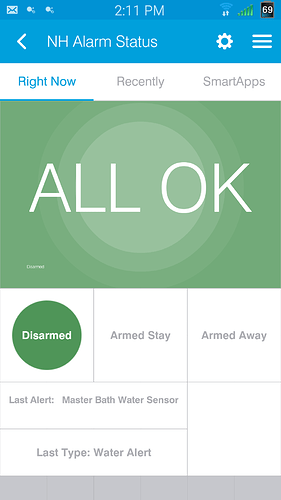 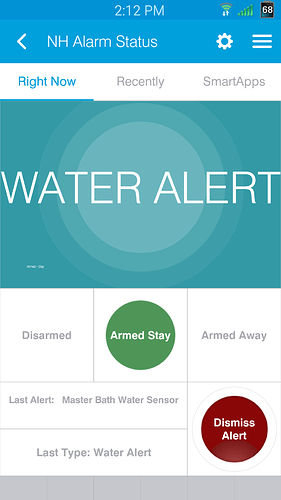 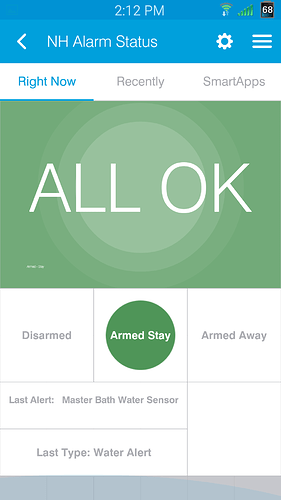 also as a side not dismiss or disarm will not really get rid of water or smoke alert because these zones are set to alert type by default which means they alert regardless of whether smart alarm is armed or not. so clearing the alert will temporarily silence the alarm but if the zone is still tripped with will re-alert. The only way to truly stop is to get the zone to stop tripping or remove the sensor from the alarm temporarily while you address the issue. however, this also depends on your sensor. for instance, if you water sensor does not generate another open even until it is reset the alarm will not go off again.

Looks great but which file do I update?

as I mentioned both.

Both Installed but Status does not have color around the status of the Alarm as yours shows Green circle around Armed Stay. I also have the SmartThings Logo where yours says All OK the color shows up for a split second than gone. Also no Dismiss alert on my screen. 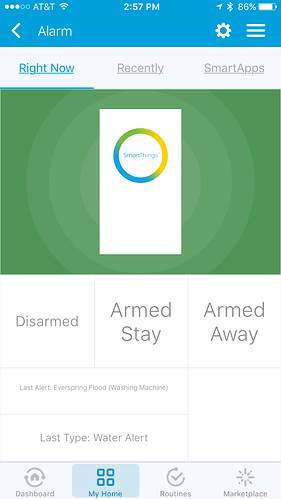 I also notice in the green area you have in small text some writing I don’t have that either. 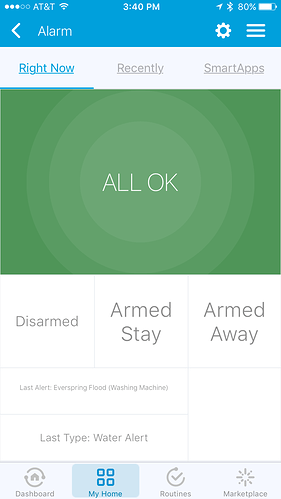 no icon color means it doesn’t know you state… arm/disarm ie change modes to it gets the notification
the blank icon must be something that ios specifically does not handle… I will remove it from the app. or look for a security icon

OK then why doesn’t it know the state, as it is changing in smart alarm?

maybe you didn’t update smart alarm as well. that needs to be ujpdated

I did but I will do it again now. 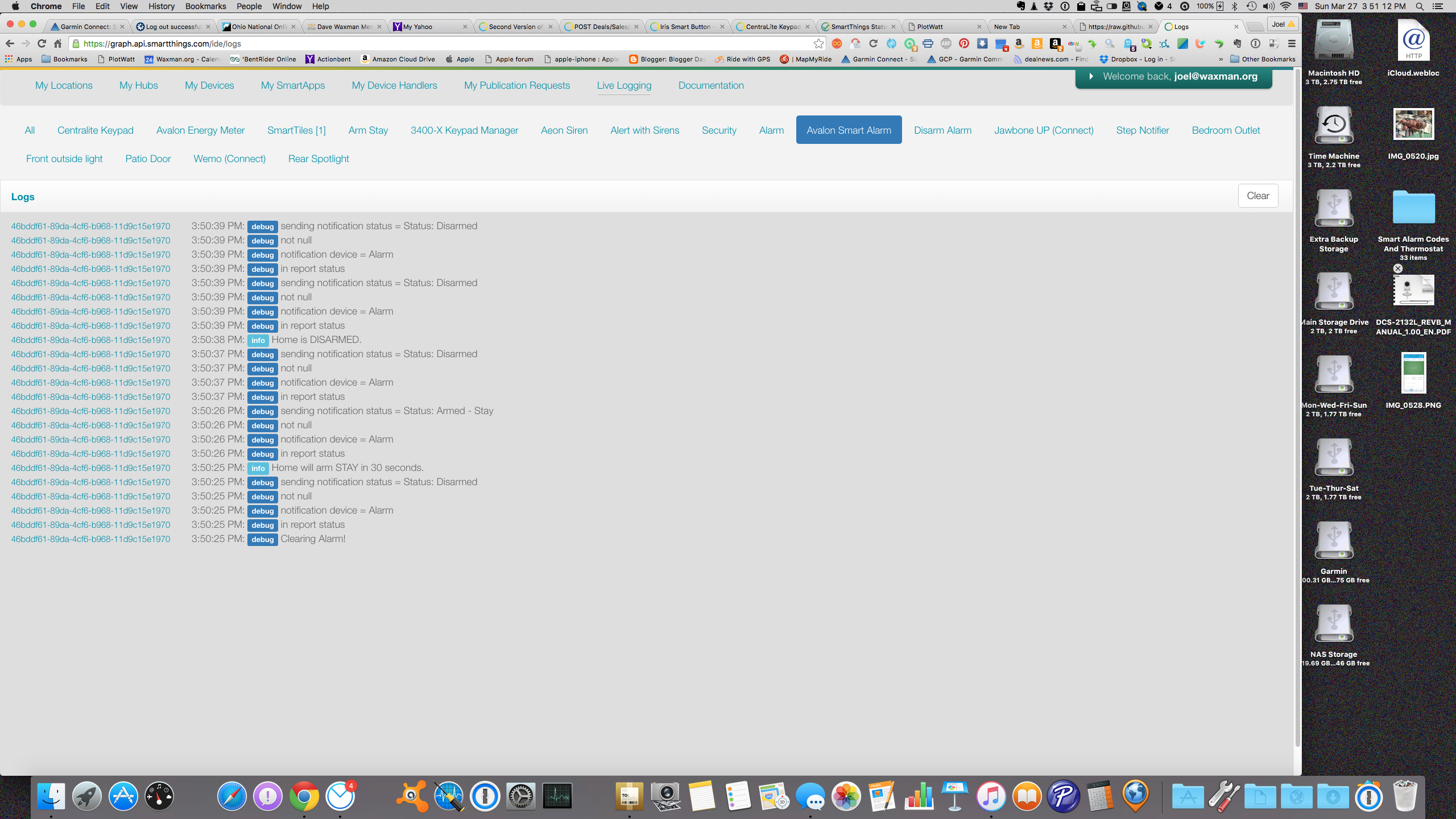 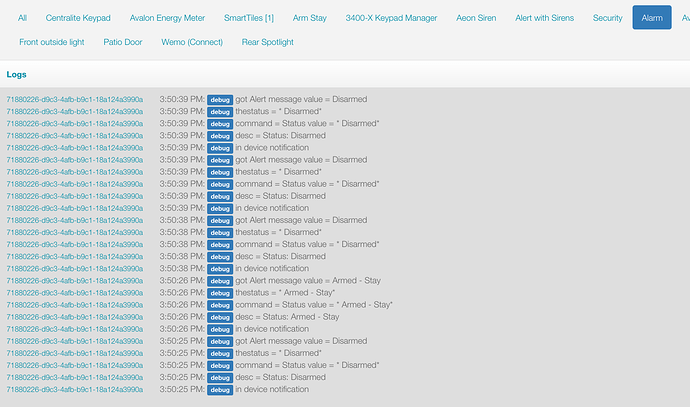 Ok the green area shows new icon and Dismiss area has icon but no color behind status or small writing in green area. Dismiss does nothing. 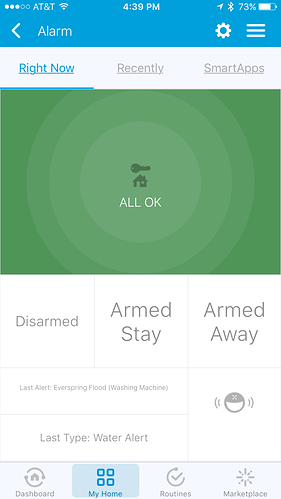 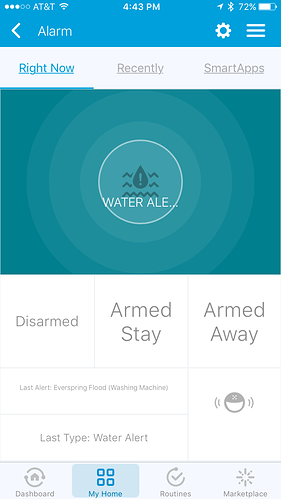 yes update again and post logs both for arming disarming and attempt to dismiss…
thanks
your mutlit attribute tile is not working either… there should be small text etc.