We’ll be honest: The thing we had here was REALLY not rockin’ it. So out of our desperate attempt to be rich love for giving you options, we've switched it to an item we hope you like more. Consider this is your chance to help us look good to our...

These are the 6414, which are on the list of officially supported Samsung cams. Not the 6413s which Woot has been dumping at this price lately. At $40ea are no more than an average PIR. .
Yes they are refurbs, but at 2/$80 vs $120ea for new I’m willing to risk it.

SmartThings tech support will not confirm that the “BMR” will work with SmartThings.

I’d get some if I had confirmation they’d work but as of now I’m not sure if anyone’s tried.

That said, they’re actually solid/easy to use little cameras - but you’ll have to view them through the SmartCam app - which is kinda ugly with crappy UI.

Thanks! I have the regular 6414 and agree, they’re not bad. except for rebooting and a bug that turns the led back on every time it reboots they’re not bad. I use the SmartCam app to view recordings and talk (…scare/surprise…) my kids but my wife likes to be able to just view the livestream within the same app as the home automation.

It’s too bad. They’d probably sell a ton of the refurb units if they worked with SmartThings.

Ass-U-Me’d mr just stands for Manufacturer Refurbished, whereas N = New. So since N are on list they would work

That said, they’re actually solid/easy to use little cameras - but you’ll have to view them through the SmartCam app - which is kinda ugly with crappy UI.

My 4 arrived today in brown box ( okay they were white boxes) labeled V6414BN on the labels " REFURBURBISHED" printed all over the box. I downloaded Samsung SmertCam and got 2 of them online, updated FW. Opened ST app, add new thing, add manually, Camera, Samsung Smartcam 6414BN, waiting waiting found 2. I had to add them to ST one at a time, ST did NOT keep the names I just assigned in SmartCam, so after each was added I went into its settings changed the name , then put it in the proper ST room. I can adjust cam settings ( 480/720/1080) in ST , change SSID, or cam PW. I tried the " set up new cam" in ST on cam #3 instead of setting up in SmartCam app first, but ST app just froze and crashed… Okay have to set up in SmartCam app, then add existing to ST.

No there is no actual integration, so I can’t use cams as motion/occupancy sensors as I had planned. They do however integrate video into ST, can be viewed in ST and SHM can have them record on alarm.
All in all for $40ea I am happy, just not as happy as if I could use them as motion detectors. 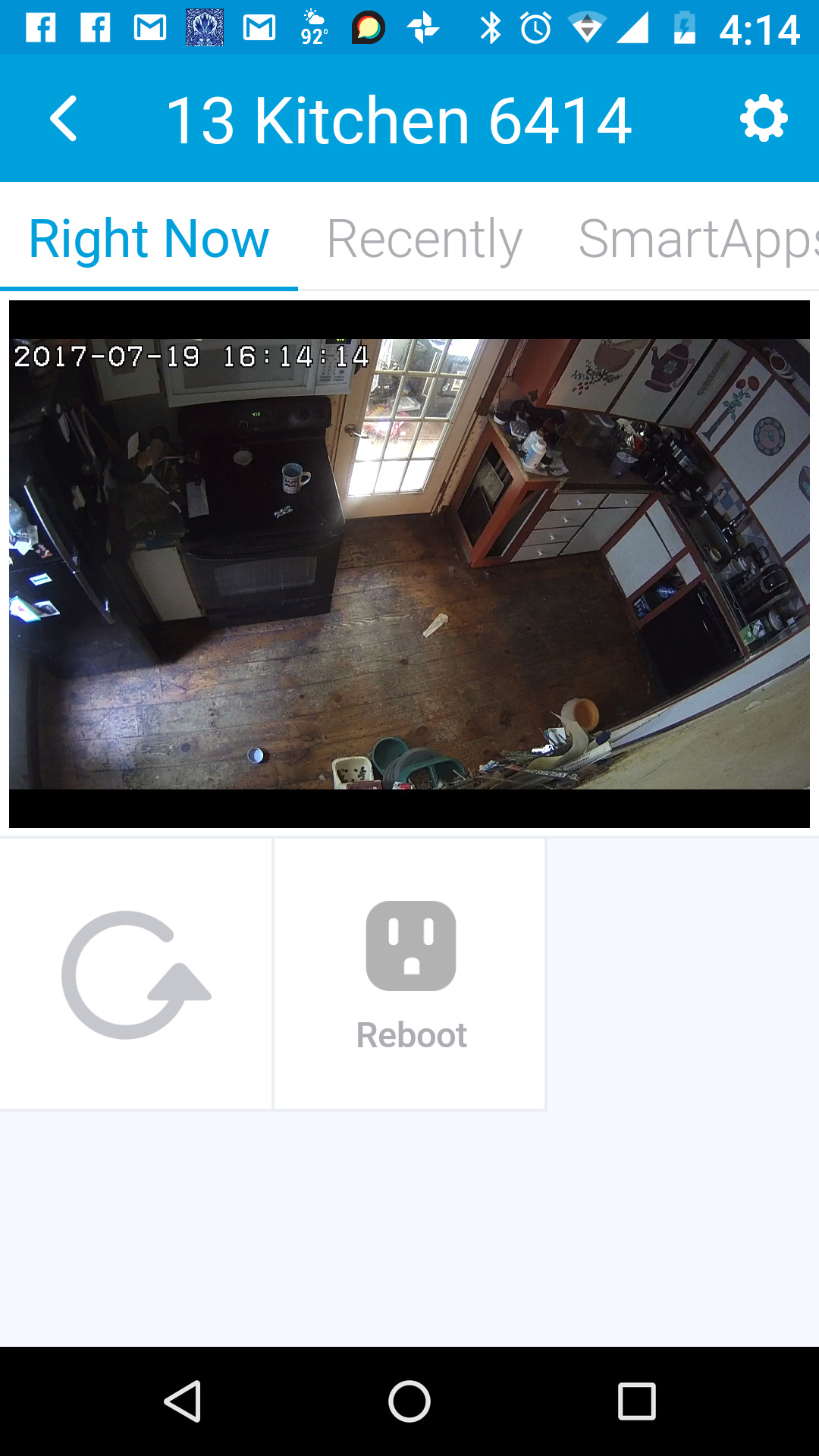 Did the other 2 not work or did you only try 2?

They do however integrate video into ST, can be viewed in ST and SHM can have them record on alarm.
All in all for $40ea I am happy, just not as happy as if I could use them as motion detectors.

Nice! I stand corrected. When I bought mine - they were not supported - only the white SmartCam Pro was. Like this - it only works as a capture on alarm - not as a motion detector.

ST limits 4 cams per hub, so I bought just enough lol. Not at all impressed with the smartcam app… The no multicam page view or even a way to cycle through the cams is ridiculous.
I placed 2 of these in the same places as an old Moto Scout 66 & a Nest cam ( save me the $10/month ) and even though other cams showed 90-95% Wi-Fi signal the 6414s keep dropping off or freezing up for poor signal qualify. Even the 2 within 10 feet of router can’t stream live or playback for more than a few seconds before dropping off. 24 hours into them & while video quality is good the interface is terrible.
As others mentioned every time the reconnect to Wi-Fi the green light stays on, even if it is set to off in the app. Fortunately it is not a bright annoying light. However it is enough to draw someone’s attention to the fact cam is there, which is not ideal when recording to internal memory cards.

I picked up one of these and was able to make a little headway - I got the camera configured in the smartcam app and even got a firmware update from out of the box to 1.15_171212, but when trying to add it to smartthings, following instructions even available from samsung itself - I can wait for 10+ minutes and never have the camera show up in the available ‘to add’ list of devices.

Do you have Samsung SmartCam HD Pro app installed in SmartThings ?
It’s been so long, I don’t remember the exact inclusion process, but it wasn’t difficult at all. I do remember having to add one at a time because it did not import names from SmartCam Android app

The phone app I found for camera setup is this one: Samsung Smarcam by Hanwha Techwin

I did not add a smart-app to Smartthings itself prior to adding the camera because I didn’t know one existed, and it also seems to be ‘cart before the horse’ to check that availability. To that end, checking right now, I see nothing that I can add that is named this way under ‘add a smartapp’. There’s no camera category, and the security/safety category doesn’t have anything in it either.

Maybe the app installs itself, once you connect a Samsung Camera. It’s listed in my ST apps 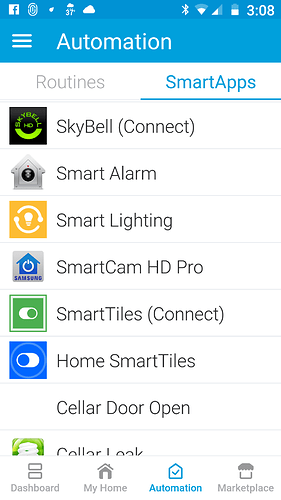 What is the firmware on your 6414BN camera? Is it the same as mine? Did I miss a step or not wait long enough (although 10-20 minutes seems excessively long)? Is there a setting I need to tweak in the camera via the android app first to make it detectable?

I’ve had mine “forever”. So like I said, I don’t recall the exact steps. Just install the cams on WiFi network, set up cam names and passwords. Go into router and set static IP addresses. Open up ST app and click on add camera. It scans LAN and then asks for camera login credentials.
Without removing one of my cameras I can’t see the exact steps, since I have the 4 cams allowed already connected. ST all doesn’t give me the option to add another to see the steps. 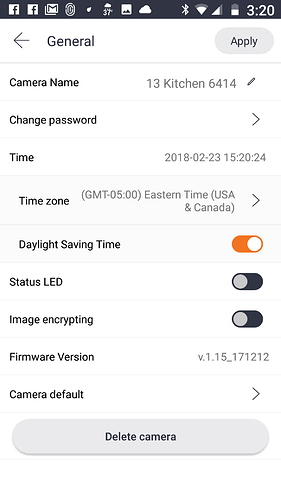 The mention of static addresses is one I was wondering about. Initially I could not see it in the dhcp lease list on my linux server or even on the wifi access client list for 2.4ghz (when actively using the web UI from samsungsmartcam.com). Eventually I kept at it found an unlabeled IP in the table, ran an arping and confirmed the MAC on the camera. So that mystery is solved. It’s definitely on the network and reachable via web browser or phone app, but smart things still just sits there and spins forever on the detection/auto-discover page. Is there a way to bypass this and specifically tell it which IP to look at rather than having it scan willy-nilly?

In the cameras settings in ST, I don’t see any option to set or even view the IP address of the camera. So I’ll ass-U-me not. I can change the SSID credentials in ST, but not the IP address.

It was more a question of having the smartthings ‘add device’ wizard inspect a specific IP of my choosing rather than having it just randomly search.

Regardless, the answer seems to be no.

So if I go to the smartthings back-end site (api.smarthings.com) and access my hub that way, I can add a device with the ‘network ID’ being the IP address I discovered, select ‘Samsung Smartcam’, and click ‘add’. This makes a device pop up in my phone app that says ‘active’ but when I try to select it so I can do things like enter password and such it fails to come up and be functional.

Any advice? I was hoping I could find that Smartcam HD Pro smartapp and add it that way as well but so far no luck.