Just noticed this on my S7

Well I guess that confirms the new, unified SmartThings app is just a re-branded Connect app.

They haven’t posted this in the iOS version of the app, yet.

Well I guess that confirms the new, unified SmartThings app is just a re-branded Connect app.

How does this confirm that?

Isn’t it the same to say that the SmartThings app replaces the Connect app? Or … more likely… some hybrid, of course?

Not sure how long thats been visible in the app on Android. I was bored and was having a poke around and that was part of the scrolling header

As predicted before, the app will get an update soon

Well it’s inside the actual Connect app, so that’s pretty good evidence. But I suppose it won’t be confirmed until the app is actually updated.

For all we know, they could

None of this is going to happen though until ALL existing SmartThings accounts have been migrated over to Samsung accounts. And that is quite a ways off still. They are doing the 3rd round of Account Migration Betas right now working out all the nuances and idiosyncracies.

In my opinion, you will know they are close when either an announcement is posted or a ton of people begin posting that they have a banner page for migrating when they open their ST mobile app (surprise lol).

The migration script consists of those with SmartThings account to manually create a Samsung account and then everything gets migrated to the new account via the script.

I don’t see the App being released full blown until they accomplish this migration first, otherwise it’s going to create that much more chaos than they are already dealing with between the 2 Apps as they exist now. Then again, they do like the painful route, so maybe they will release the full blown App before this migration is complete.

Anyway, I still see this as being many months off from now, just knowing what some of the issues with migration are that need to be overcome and resolved.

We call that SmartThings being consistent

If you have a Samsung account for your ST the Samsung Connect app actually connects to all of your ST devices. I have this feeling ST app is going away while Samsun Connect will be the replacement. How they designed the app only makes sense. Uses the new mobile UI look and feel while ST stays buggy and stale.

There have been two Hue apps for a while, but most people don’t get confused because they have very different icons. And the description for the older one says “hue generation 1.”

This is an issue because there are certain commands that are performed in “Connect” that cannot be performed in SmartThings. For example, Connect can reboot your WiFi and hub, SmartThings doesn’t have that ability.

So this is interesting…

About a week ago I got an update to Samsung Connect on my S8.

I was messing around with some headphones and had to activate it to allow easy switching between the two.

I believe that when I did that, I nuked my hub and killed all the devices. Nothing works anymore and I had to re-add my hub using the original code.

I would be careful with this for now…

Well, seems like indeed the new version of the Samsung Connect app (1.7), which seems to have been leaked in APKMirror, has been rebranded as SmartThings… 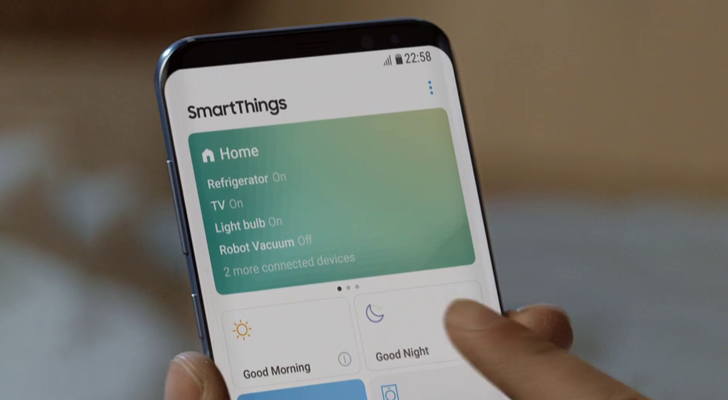 We've known for a while that Samsung is consolidating its 40+ smart home apps into the SmartThings app, and the company confirmed yesterday that the revamp... by Corbin Davenport in Applications, News, Samsung, Videos

hopefully this new version will be easy to use and not buggy!

Continuing the discussion from Samsung connect is now Smartthings:

I installed the leaked samsung connect app (1.7) and is the same as 1.6 but the only difference is that is called “Smarthings”.

There are issues with the “new” smartthings (old Connect) app. If you are using anything outside of samsung, the devices dont seem to register correctly.

As an example, none of my Fibaro wall dimmers work on the app, nor the motion sensor. The devices are see as always on, meaning no way to actually switch the lights on or off and due to this, the motion sensor routine wont work.

Have they released the app in google play?

I saw a a video revue on line from a blogger that mentioned that Smartthings future plans was only to make it compatible with Samsung gear. If this is fact its gone suck and I will be selling my hub fast and go back to Wink 2.

Someone please shed lights on this and say it aint so!!!

I would say that is evidence that whomever was blogging has either never used SmartThings, or is just pulling information from his backside to get attention. There are numerous posts here explaining the new API’s, some of which are not even finished yet. In addition to the new APIs and development environment, SmartThings has already stated that custom code will continue to be supported in the legacy IDE as well. If anything, SmartThings will be able to support more devices, not less.