Was just browsing on of the tech news sites I follow when I came across this post. Looks very interesting and sounds like an easy way to prevent network issues. A little pricey though. I thought others might be interested in it. 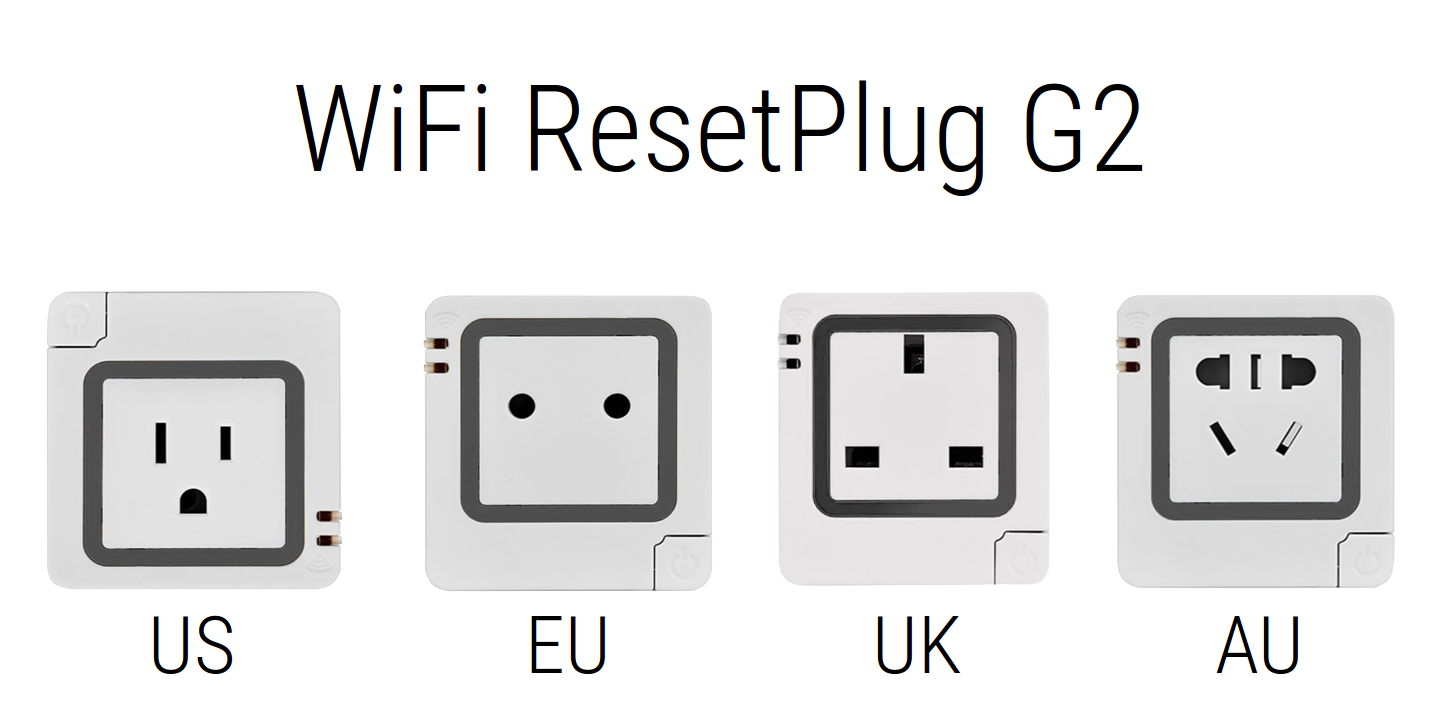 A smart plug to monitor your WiFi router/modem and reset power if WiFi fails.

Really surprised no one is interested in this.It is a little pricey but easily fixes the network drop issues.

I really like the idea. It would be nice to hear from someone with real world experience.

Yeah that would be helpful.

Looks like this is just a re branded device by another name. http://www.amazon.com/WiFi-ResetPlug-monitor-router-automatically/dp/B01BU2ALGO/ref=sr_1_2?ie=UTF8&qid=1462388563&sr=8-2&keywords=reset+plug

It’s the same device: MultiNet is the company, ResetPlug is the product. Cool looking gadget: I considered it, but ended up re-using another I already had on hand…

Anyone have one of these? How’s it working out?

How would you program ST to do this when it is down?

Edit: my question is tongue-in-cheek.

This particular issue has been discussed in the forum many times before. you can use a variety of equipment for it. The only thing you cannot do is use a switch that is only controlled by SmartThings to turn it back on on demand.

Some people do have a switch which runs on a timer.

But mostly it’s easier to just use a switch which can also be controlled without using SmartThings. For example, a WeMo switch allows for independent control.

Here are some of the previous discussions

Is it possible to reboot the hub remotely? I am having some of the same problems others were having last night with stuff not responding. My outside light did not turn off at sunrise like it usually does and now I notice my thermostat did not change when we left, although the mode did change. I am at work and want to reboot my hub to see if it fixes it. Is this possible? Thanks, Scott

Looking for something to remotely power cycle your hub? You’ll need a switch outside of SmartThings. This little switch also works as a Wifi N300 extender. $17.19

Does power cycling have same effect as a reset? Devices & Integrations

I have two homes each with a hub. Both went offline last night. I was able to power cycle and reset where I am but the home 1000 miles away remains offline and I likely won’t able to get there til January. If I remove batteries and power through a unconnected wifi plug, will power cycling effectively reset the hub? Anyone have any other ideas for remote reset?

My hub has been offline for 1 1/2 days. Reboot command is not reaching the hub. I submitted a ticket yesterday, but no reply yet. Any ideas would be great! [image]

I’m pretty sure there isn’t currently a way to do this, but thought I’d check. About once a month our Uverse router goes offline and has to be rebooted. It would be great if there was a way to use ST to automatically turn an outlet off and back on when the hub goes offline Any thoughts

Has anyone tried or figured out a way to automatically reboot a router when smartthings can’t connect to the internet?

Wanted to share this here. http://3gstore.com/product/2062_ip_power_remote_switch.html These guys make a wired network dual outlet that has an auto-ping feature where it will restart your router/modem or whatever if it loses internet connection. I asked them about any kind of API to control it, they said its just a cgi script. I thought if anyone was interested, they could write a SmartApp to control these. http://IPADDRESS/outlet2.cgi?user=admin&passwd=1234&outlet=0&command=1

Power Switch that will Auto power on after power failure? Devices & Integrations

I am looking for a Smart Switch that will auto power on after power failure. I have this connected to my Internet Router. I recently ran into an issue where my Aeon Labs Smart Switch (DSC06106-ZWUS) had a power failure, so naturally, the Internet remained offline until I was on the same WiFi network in order to power on the switch so the Internet would come back online. So my question is: Can I do this with the Aeon Labs Smart Switch? If not, what would be the best device to get to be configured to automatically power on after power failure? Thanks in advance for any comments and feedback.

While away on vacation my modem or router got hung up and it got me thinking about a remedy. In the past i have just used a plain old outlet timer to reboot daily but that’s admittedly excessive. Has anyone tried one of these? It looks like it can sense an internet outage and can reboot two devices. It also has a web interface. The price is not cheap but should help ensure I am connected even when far away.

There are more discussions than these, but they pretty much all come down to the same thing – – use a separate switch which can be controlled even if smartthings is down. Some are fancier than others, some autodetect a power loss, some run on a regular schedule so you get a reboot every day or every week, some are people asking about rebooting the modem rather than the hub itself which complicates the issue and requires a self-starting switch.

A lot depends on whether you want to be able to reboot on demand, automatically reboot after any power failure, reboot the router if the power is restored but The internet/wifi is down, or all 3.

But they’re all similar, just the specific devices under discussion vary depending on the exact features that you need.

The specific brand resetplug has also been brought up in the past at least four or five times. This particular one does get some bad reviews on reliability, which I would find a little concerning.

Personally, with regard to resetplug, I wouldn’t use it because of its methodology. It’s continuously connecting to websites over the Internet and I don’t like either excess traffic or some of the security issues that it raises. I would rather just use a device which monitors the power it’s plugged into.

Yes, it’s possible that the wifi could go out when the power didn’t and then there’s an issue. Personally, again, if I thought that was going to be a common occurrence I would get a device which monitors the local Wi-Fi connection, not actually going out over the Internet, and then an external website of my choice on my schedule. But that would probably cost more.

If you do need to track Internet connection, not just power outage, I prefer the following brand to the resetplug because it has more features that I would use. In particular, I get to specify the website it pings, which, like I said, is a security advantage over the resetplug brand. It also has some nice timer options which the resetplug does not have. This brand has much higher Amazon ratings, and I think these features are probably why. It also seems to be somewhat more reliable.

On the other hand, it costs $40 more. So as always, different things work for different people.

This is the latest version of the 2-outlet IP Switch (model UIS-622B) which features a cloud-management option for remote management via web browser or app and an updated design. The 5Gstore IP Power Switch is a...

(3G Store has now rebranded themselves as 5G store.)

They sell several different versions of this:

Also Ankuoo offers a very stripped-down version. No notifications, only one socket. But it does have pings and a once a day timer for under $25.

1 Like
How can i turn off a z-wave switch off and after 20 second on being my wifi router switch? (Reboot router if it loses internet)
Is SmartThings Hub can send pings?
Remote Reset Plug (Power Cycle) System?
Dechlan_jacobs (DJAC) September 4, 2016, 10:09am #9

Then I’m surprised no one has made a smartapp. Basically it would tell the smartthings plug to switch off after N minutes if there is no detection in network. Then switch back on say after 20 seconds. Basically there can still be communication between the smartthings even if the user can’t communicate with the hub. Is this app possible or must the smartthings hub be able to make contact to the cloud. I’d be very disappointed not to mention it sounds alot like the reset plug anyway.

That is true home automation. Being able to fix itself as well.

This would be pretty simple if smart things was POE. I can remotely have my switch cycle a port.

Bluebolt is another solution. You can set up auto reboot based on internet connectivity. You can even issue reboot or power commands remotely. It’s pricy but worth it.

Have a read. Not something I’ve done myself but…

POE for my Smartthings Hub

So I was just going to dump this all in and let you all fend for yourselves but in the interests of you not blowing up your hub I feel I should do a little bit of an explanation. Usual disclaimers apply, this is NOT supported and there are no guarantees it will work at all. I'm NOT responsible for any loss or damage to any property or data. At this point I have openly admitted to ST that I have used a power supply other than the one they give you with the hub and I accept that in all likely hood that if I have any issues with my hub, ST will tell me to go and pound sand and they have every right too. If you choose to attempt this as well you MUST accept this risk. Firstly there are a couple of ways people do PoE and they are what I wi…

Just be careful, as I mentioned in that thread, the grounds aren’t isolated.

Fine if you never plug anything else that has a ground into the SmartThings hub and at the moment there isn’t any reason to be… but if they activate those USB ports and you plug some USB device in there that has its own power supply, you’re likely to destroy the whole lot and possibly the switch as well.

A minor point that may already have been nmentioned.

If you reboot the hub and it happens to be updating at the time it may not end well. Suggest you think carefully about scheduling a reboot and also about a manual reboot that could occur during an update.

I’m lost. I read that the smartthings plug is used locally. So even if internet connection is lost , can’t one create an app where it automatically restores itself after 15 seconds of switching off.

I’m lost. I read that the smartthings plug is used locally. So even if internet connection is lost , can’t one create an app where it automatically restores itself after 15 seconds of switching off.

I know this is very old, but since you never got an answer…

Unfortunately, no, because even though the plug is eligible to run locally, at the present time all custom code runs in the cloud. So any smartapp that you write can’t run locally.

At the present time (December 2017) the only code that can run locally is the Official smart lights feature and some bits of smart home monitor. But only if the devices are also using Device type handlers which can also run locally. Even routines don’t run locally.

So there are two parts to running locally: the automation/rule, and the device type handler. And at the present time there’s no local automation which can do the “turn back on” step.

Work for what? It will turn on, but what condition are you using to turn it on?