Trying to pair any of the devices that came with the ADT SmartThings panel.

I do not remove the pull tab yet, since the instructions state specifically not to.

Anyone else have this issue?

I do not remove the pull tab yet, since the instructions state specifically not to.

This sounds suspicious / wrong to me. The pull tab typically isolates the battery from draining, and thus the sensor is unpowered and not able to join. 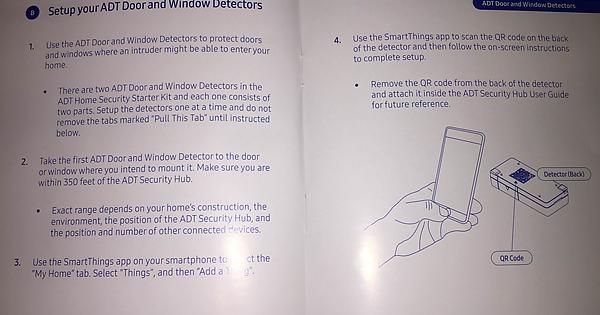 I presume the instructions are wrong.

Does the pull-tab isolate the battery? If so, then I personally believe it is necessary and appropriate to remove it immediately after scanning the code.

Yep. Not the best directions… I was wondering if that was the right case but heard it’s a pain to fix if you pull the tab early. Thanks!

That worked! I suspected as much but nice to see a confirmation. Thanks guys.

… but heard it’s a pain to fix if you pull the tab early.

Sensors are shipped ready to pair as soon as powered up. The sensor gives up after a while to avoid killing the battery.

Thus if you pull the tab before the hub is in “join mode” you might miss the window of opportunity. Then you need to figure out how to force the sensor into join mode which can be complicated and different for every model… But not that hard.

While true, there’s very little documentation on troubleshooting these new ADT devices. So it may not be hard, but I didn’t know what it was.

@Brad_ST Any idea how to re-join a sensor to the ADT Panel? As part of troubleshooting with ADT they asked me to remove the device and re-add it to ST. I tried the usual to put the ADT / ST door sensor into pairing mode, but no dice. Thanks!

Did you look in the knowledgebase? https://support.smartthings.com/hc/en-us/articles/115003710523-ADT-Door-and-Window-Detector

Also support.smartthings.com/ can help if you get stuck.

You’re the best @Brad_ST! The last time I looked the support docs weren’t there. I appreciate the quick help.

@Brad_ST I am having similar issues trying to add the door sensors with the ADT Smartthings hub that I just brought.
I have reset the sensor several time to have the slow blinking and whenever I try to pair it in Smartthings app, the hub loses connection and goes to “System Inactive” mode where the app is just stuck on registering loop.
I was able to add the motion detection successfully.

@yogesh_sharma - i am having the issue! I cannot figure it out. I had about 5 door sensors and 2 motion sensors already paired. I went to Best Buy and purchased a bunch more sensors because they were $5! Unfortunately I wanted like a month before I went to pair them and everything I scan the QR - the ADT goes to System Inactive. If I try to manually pair, SmartThings app just sits there. I pulled the battery from the hub and tried resetting it and still nothing. I am stuck. Any suggestions?

I’m having the same issue as Yogesh and John with one of my motion sensors. Other motion and CO sensors got added successfully but this one refuses to pair.

similar problem to me
can not pair more than one smoke detector, I already tried to reset the detector.
how to solve the problem? thanks

I’m having a similar issue. Anyone know of a QR work around or something?

Update. I just pressed the reset button rapidly until the light stayed solid actually and I manually typed in the code and it worked. I doubt it was the manual retyping of the install code, however I do think there is some setting that pushing the button a few times then long holding caused it to finally reset.

The Samsung reset instructions here definitely did NOT work for me

The ADT Door and Window Detector monitors whether doors and windows are open or closed. With SmartThings, your ADT Security Hub can then send an alert to your smartphone, automate connected devices...