Just FYI, I’ve had the Z-Wave Popp Outdoor Siren installed and running for over 1 year now. Works perfectly for me. I did find that it used to lose connection with the hub, so I built in a WebCore routine that triggers the siren for 1 second at 12pm each day and it has been solid ever since.

Bonus is, it’s almost like having a cuckoo clock at home that let’s me know it’s lunchtime!

I’ve been looking into External Siren’s for use with SmartThings and came across this thread which has been useful. Based on your post I’ve been looking into the Yale SR-BX-ZW and contacted Yale UK via Twitter who pointed me at this - https://www.yalestore.co.uk/yale-external-live-siren-1.html, I’d already found this but as the model number is listed on the website I’ve asked Yale UK to confirm that this is the one and same z-wave siren.

However I was also wondering if anyone else has successfully used one of the Yale SR-BX-ZW Siren’s with SmartThings and what their experience was like getting it to work?

I am after something similar, thinking of using the Yale external siren. Any luck with it!

Went round in circles with Yale for a bit and they finally advised;

“We do not sell a siren that connects directly to the smartthings hub. You would use a Yale smart home alarm with the siren in the kit.”

So unfortunately no progress on an external siren!

I was planning to buy one from amazon to try but no luck they are not dispatching the unit.
I think I will get the d link siren and will put it inside the yale dummy

I read somewhere in the forum that you were using a dlink siren inside a dummy.
Will it work, just with the optional battery backup (no mains)?
Did it work alright after connecting up with ST?

@ahmed24 - How did you get on with this, did you decide on an outdoor siren? Do you also have an indoor siren, too? If so, any recommendations?

Would something like this work as a siren (https://www.amazon.co.uk/dp/B00PVCXB3A)?

Hi @JeffRoof I’ve been looking at the Neo Coolcam siren, I’m not hugely bothered about the fact that it’s not weatherproof as i’ll mount it under a soffitt to shield it from the bulk of the weather.

Hey @madmarko - Any particular reason you would get the NEO over the D-link I sent above?

just price, the Neo Coolcam can be had for half the price of the Amazon link.

How are you getting on with it? have you purchased yet? A siren is definitely my next Smart Home purchase

Aha, I see. I haven’t, yet. But, similar to you, I want that to be my next Smart Home purchase - I was just ensuring that it’s the right one that I buy.

I’ve also come across this one, but does not seem to be available in the UK, where I am based;

Just wanted to update you 360 degrees.

I ended up buying the Neo Coolcam, and it works fine and has a very elegant device handler BUT I don’t think it is very loud.

@madmarko Aha, I see. Where did you get it from? Was that from Ali Express? After a few days of usage, is it functioning as you imagined and still recommend it?

As far asI can see Yale UK (since this is a UK thread) do not sell a Z-Wave version of their external siren and may never have. The links in this article and Google searching seem to suggest that any past Yale Z-Wave external siren was US only.

Sadly Yale UK have been and still are woefully far behind our US cousins.

In this case it is a particular shame as it seems it would have been exactly what a lot of people were looking for.

I am not sure if it has been mentioned previously in this now long thread but a I have previously seen a suggested approach which involves getting a standard (dumb) external wired siren and connecting it via a ‘smart’ relay e.g. a Fibaro relay. You would then define a rule so that if alarm is armed and sensor is triggered then turn on power to siren.

A friend has the Popp solar siren (https://www.popp.eu/products/actuators/outdoor-siren/) and I know he had no issues integrating it because it is Zwave and it has been working fine for the past few months, the only reason I didn’t buy one is because it was stupidly expensive €150. I think he bought it from zwave.eu but as it is solar power there is no issue with having an EU plug!

@anon36505037
I had a cheap non-smart wireless alarm system and it had a solar/battery external siren. It appears to have given up the ghost. Apart from the repeated cold spells being bad for batteries the UK sun is probably on average too weak plus the fact that it has to in my case be on an east facing wall.

Clearly the DC power option of your Popp would be a solution. However I also came across the following.
http://www.wolf-guard.com/outdoor-zigbee-alarm-siren-p15.html

This has no solar option but is Zigbee and does also have a DC option. (With battery backup.)

It’s the only Zigbee one I have seen so far. Being Zigbee and accepting a common mini jack 5VDC input it will work in the UK.

I got one of these for Christmas 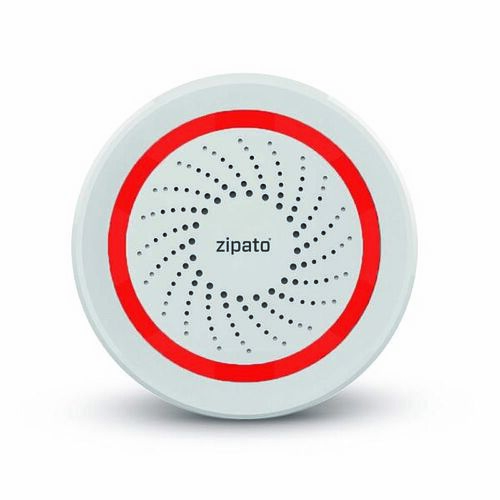 Find many great new & used options and get the best deals for Zipato Z-wave Multisound Indoor Siren White Smart Home Technology at the best online prices at eBay! Free delivery for many products!

Its got a red LED, and works as a normal Zwave Siren. I coupled it up with the delay SHM smartapp, and it works sweet!

One thing I really wanted was the ability to run everything “local”, so if the power or internet goes out, the alarm would still work, a lot of the 3rd party device handlers rely on the cloud, but this seems to work as a general Zwave siren, and it REALLY loud, I put it in my loft space. It has a battery backup and USB power plug… just have to hide it away in the loft!

@robkae How have you got in with this, nearly a month later?

Recommend it still, or come across any issues?

Also, pardon my lack of intelligence on this, but, if I was to dis-arm my house alarm automation before I enter the house, there is no need for me to set-up the ‘SHM smartapp’, right? Or, am I missing something?

Not come across any issues, works perfectly well as a siren. The only thing I do miss, and I haven’t looked into it too much, is using it to just beep or chime, possibly as a door bell. But otherwise, really good, it triggers when I expect it too.

With regard to your question, to me, smartthings could be a home alarm in two ways.

I think you have gone for option 2. My only concern I had (and you might think differently) is that you dont get the “everything is ok” in the smartthings app, and when an alert is triggered and why , and you could also see very easily when an alert was triggered what else was triggered as well. I indeed thought the same as you, and thought I could just use automation to setup and alarm, and I used Rboys entry and exit app, but I found that the SHM wasnt engaged, and when motion was triggered it didnt tell me where and when and why. There is no right way, there is only the way that works for you

And with the automation, you have to make REALLY sure, that nothing is in the cloud and it all runs local. With Rboys app, because its an App, it must be in the cloud, and then if the internet went down, would the siren trigger? I read somewhere that the SHM is better because it works Offline.

And theres no such thing as a silly question

@robkae - Thank you for the thorough response.

I’ll try this out, and try update you.

I do agree with you about the connectivity issue with automations being in the cloud - a few times internet has gone down, and put me into a panic as I’ve been out of the house!