Out of Sync Bulbs: Manual Switches; How to combat that?

I installed Smart THings this weekend with integration into the new Cree light bulbs and some beta code. It seems like while it works, it gets out of synch quite often as people flip the switch manually.

[quote=“Brian_Knight, post:1, topic:11638”]
If someone flips the switch manually on a smart bulb, is it inherently always going to get out of synch and essentially loses power and connectivity?
[/quote] Yep, that is the problem with smart bulbs, no power, no sync. I know with the GE bulbs, if they went without power for too long, they ended up needing to be removed and readded

[quote=“Brian_Knight, post:1, topic:11638”]
If that is true, how do you combat that? Smart switches instead of smart bulbs?
[/quote] Lots of duct tape

Bulbs are great for lamps that are always switched on. Otherwise switches tend to work better

Thanks Kevin, is it fair to say then that when my wife turns flips the switch that power and connectivity is loss to the hub?

Yep, that is correct.

However, you bring up an interesting point - why don’t smart bulb vendors install a little battery in the lights…not to power them on, but to allow them to continue to communicate? They could tell the hub that they can’t come on because there is no power to the switch.

Obviously, the smart bulb vendors are not really thinking about how people install then in existing environments AND how not everyone in that environment will remember that the switches no longer work.

You could rewire the switch by just passing the line to the load, skipping the switch, and put a blank plate on the wall OR install a non-load zwave switch to simulate controlling the light. Zwave switch tells hub to turn on the lights and the hub turns on the lights.

Yep, that is correct.

However, you bring up an interesting point - why don’t smart bulb vendors install a little battery in the lights…not to power them on, but to allow them to continue to communicate? They could tell the hub that they can’t come on because there is no power to the switch.

Mostly because the vendors know real people don’t want to change the battery in a light bulb. An always on tiny battery (to reduce cost and weight) would likely have to be changed every two to three months. Maybe sooner if there’s a lot of polling in the system.

The second factor is cost, which would go up $8 to $15 per bulb. Which pretty quickly adds up to way more than the cost of a smarter switch.

And the third is weight, although that’s less important than the first two.

Remember there’s no problem at all if you make the lights fully automated, as in office buildings or mood lighting.

The problem comes when you’re trying to mix automation and manual controls. Then you need the smarter switch.

BTW, the smart switches don’t have to be zwave. The zigbee SmartenIT line or the Hue Tap both work well, although the Tap doesn’t work with ST yet.

I feel pretty confident that both Philips and GE did a lot of “real people” consumer research on their products.

I use switch guards to prevent my wife from turning off a switch by force of habit and for rooms that have a dumb a switch but also have smartbulbs. I use a button device such as the cooper aspire RF9500 when I absolutely need a wall switch with smartbulbs. 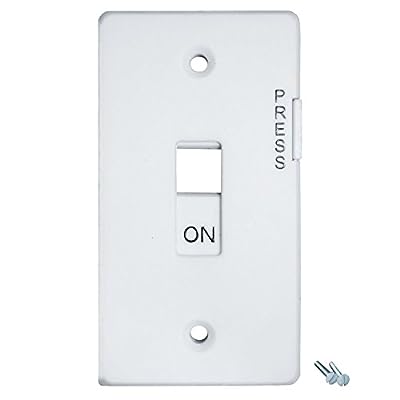 The E-Lock Switch Guard is your solutions to prevent the unwanted use of a switch. With its simple, easy to use push button operation, will attach to your existing wall plate and provides a positive l ... 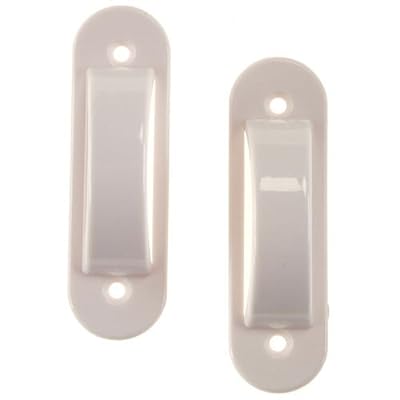 White, switch guard, covers standard switches allowing user to lock the switch in either the on or off position, 2 per card. 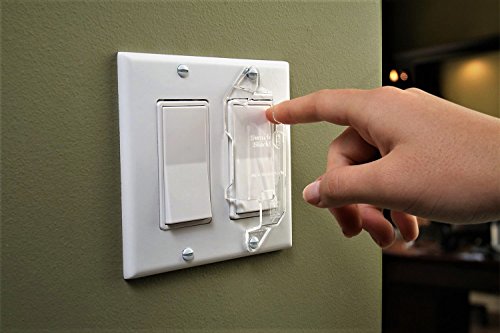 for controlling smart bulbs, you can also hardwire them always hot and use these or many others: 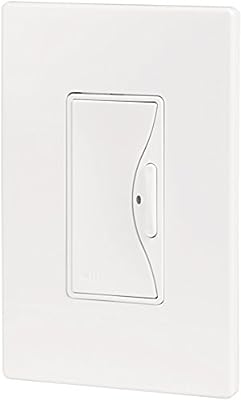 for controlling smart bulbs, you can also hardwire them always hot and use these or many others:

Check your local regulations before doing this - it is illegal in some jurisdictions.

But not illegal anywhere I know of to just leave the switch on all the time and put a childsafe lock on it. I know people who do this with medical equipment like respirators.

I thought I saw a company provide these acrylics you put on the faceplate, making it so you’re lights always stay on. GE perhaps?

I made my own, to ensure the fiancee doesn’t turn them off until I move towards Zwave switches.

I thought I saw a company provide these acrylics you put on the faceplate, making it so you’re lights always stay on. GE perhaps?

They are called switch guards, see my earlier post.

Check your local regulations before doing this - it is illegal in some jurisdictions.

It is not illegal per the NEC, and it is safe, however check you local regulations, but being an electrical engineer there is no local code I have ever seen that would prohibit this nor require a disconnect beyond the breaker in such a small load.

yes, I did see those later. Haha. Must have skimmed through and missed your post earlier on.

After working this weekend on it, it seems like the switches are the way to go and stay on dumb bulbs. Wish I had got more feedback before starting since bulbs are so much easier

I went to Lowes this weekend and their Iris line of switches works with ZWave and in turn ST but about 20% less expensive than Amazon. Once I opened it up, it was the exact same kit as on Amazon, just a less pretty box and was missing the neutral wire extender.

A small capacitor that would provided enough power to say “I’m dying!.. so I’m off now.” would be sufficient.

Actually a remember last state upon resume would solve the issue. What’s really fustrating is why Cree and GE bulbs are losing their pairings after extended time disconnected.

I am beginning to think this is more on ST side of things and not on the bulb side. I haven’t had a chance to trace the handshake / join process to see what deviceId’s are changing, but the MAC address isn’t so I think its fingerprinting / devicetype issues that need to be worked out to hold these bulbs to their pairings.

Either that, or the bulbs are losing their paired keys under Zigbee HA and are really meant to operate in a Zigbee Light Link mode, where ST doesn’t support(?) Light Link right now…

I think an easier solution would be for ST to have status feedback check and if there is no on and off state for a define time then assume no power.

The problem with all these ideas is that these bulbs are zigbee. Zigbee is a mesh network designed for very low power draw and inexpensive end devices that are presumed to go offline occasionally. Batteries get changed. Bulbs get changed. A zigbee coordinator (the ST Hub in this case) is not supposed to care if any device is occasionally unavailable. That’s the base technology here, nothing to do with SmartThings.

Any “I’m turning off now” or “Remember last state” would increase cost and energy draw.

Zigbee devices are intended for always on deployment.

If you want the network to keep track of bulb status for each smart bulb, use a different protocol. There are some bluetooth bulbs and some WiFi bulbs out there. Both can operate in a star topology which will give you what you want. But they’ll likely cost more than the zigbee bulbs.

I’ve found that SmartThings will assume a bulb is off when it’s not communicating (aka power is cut, ST says that it’s off). This is great as it’s normally the case, but I have one stubbord Link bulb that when manually switched off says ‘on’.

So I’m wondering if this issue was ever solved? Any ideas why some bulbs are recognized as being ‘off’ when others aren’t?

Just updating my previous post, it looks like both of my GE bulbs think the light is on when there’s no power. My ecosmart bulbs work as expected, both are running the same code.

Anyone have an idea about how to fix this?