Does anyone have such problems, with the newest version for android?

No, but i noticed that offline devices show up differently now: 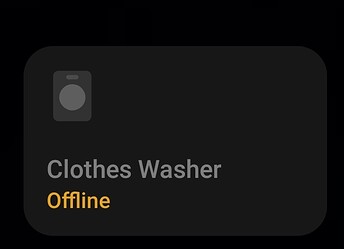 Strange. As soon as app would finish loading, it closes again. The only thing I see is the log in logo, …after few attempts phone notify me about frequent crashes…no shit

I have found this error on my Smoke/co devices running my own Edge driver: 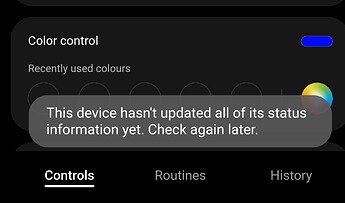 It will go away eventually, but this is a new issue that wasn’t there before.

EDIT : Figured it out. ST finally got around to adding the atmospheric pressure measurement capability, which the Halo Smoke/CO detectors have as a capability. This capability wasn’t presented in the old ST provided DTH, but I added that capability to my Edge driver but I hadn’t yet developed that part of the code. I removed that for now until I have tie to get back to this Edge driver and update it.

That happens with my devices from time to time as well. Usually, rebooting the hub solves that problem.

As soon as app would finish loading, it closes again.

Have you tried doing a force stop then clearing the cache? Or deleting and reinstalling the app?

Unless you’re on the beta version, the app hasn’t been updated since December 8th.

I did all of that, multiple times

What is your version?

I have a Google Pixel 6a, running Android 13.

Had update to this version on Android sometime over the last day or so.

I have not noticed any issues to date or changes not notified in app notices but, for unrelated reasons, I had subjected my entire IT estate (sounds grander than it is…) including hubs, phones and router/switches to a complete shutdown and reboot before I noticed the app had updated. That ‘may’ have resolved issues with the app that I did not yet know I had

Strange that i am the only one with this kind of problem. I can revert back and then everything works again

Yeah that is odd. I meant to also say I’m on a Samsung Note 20 (on Android 13), but I have no idea if that makes a difference. I did get the latest phone update back in mid-December, which also brought along Samsung’s latest One UI version (5.0 I believe).

Same. I guess Google hasn’t propagated the newer one to either of my devices. Samsung S5e tablet, Android 11. Google Pixel 4a-5g phone, Android 13.

S20FE, android 13 is on the device - more or less freshly installed 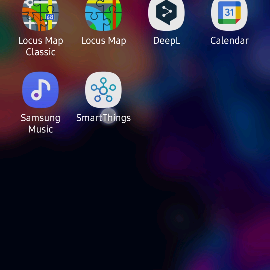 92.24 had the BSOD when returning to device pages, hopefully the new version resolves this

I tried clearing the cache and rebooted the phone, but still not working.

Well, at least I am not alone

I will observe how fast they can prepare a fix