I would like to know this as well, the reliability problems I am having with scheduled events is seriously making me reconsider SmartThings.

Thanks @chrisb the mega thread on this topic seems to have started because of an issue with sunrise/sunset, is that essentially as reliable as set time based events but with the benefit of mitigating seasonal changes?

I only use it for one rule myself, but for that it’s been as reliable as anything else for me.

Maybe eventually, but as the last week has shown not now. You would see a slight improvement in response times for a few switch to light operations. But at the present time one and only one smart app is eligible to run locally, the official lighting app, and that only with a few device types. For example, Philip Hues do not yet run locally.

They’ve said it would be desirable, but there is no announced plan or timeline for a migration tool.

Not really. Some improvements in this direction, again no promises made for timelines or details. See, for example,

@slagle Lools like routine with sunset offset is failing for me at least with the new app update today. I have opened a ticket. Even putting the routine at a specific time failed.

Most people just use sunset and sunrise with an offset for this. This is already built into the system as a possible run time restriction for many smart apps. So you can have routines that run at sunset -15 minutes and they will automatically shift over the year. 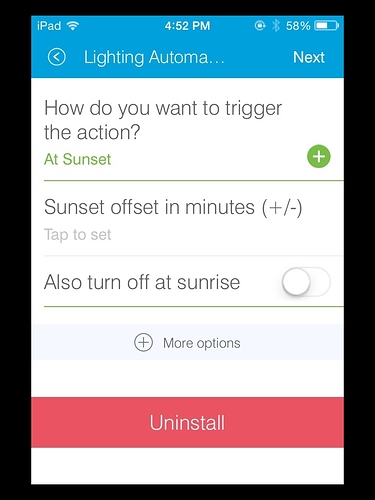