I am adding myself as well, today everything went offline and I can’t get anything back except for a few motion sensors. I have given up for the day and will try repairing them one by one in the morning. Hopefully it is a temporary glitch, I haven’t changed anything with the system recently.

I found a short-term workaround to get devices back online and working. I removed the devices and re-added them back to the system. Not ideal, but it did give me roughly 3 weeks of solid availability. However tonight I’ve had Lightify lights going “unavailable” and failing, which is how I found this thread. My guess is that ST is about to become useless again. I’m glad I never added door locks to my system…

For a solid 7-8 months from last fall into early spring, ST was rock solid then over the summer, the bottom fell out and it became unusable. I hope they sort it out, but I’m very close to looking for a new solution.

My issue is mainly with the randomness of the whole thing.

I decided that re-adding the devices was just a nonstarter and ST would just be relegated to even more basic convenience use. Then all of the sudden – without any intervention from my part – everything started working again.

Then the garage door stated reporting incorrectly the other day… And few things are as unnerving as not knowing if the door is lying for real this time and it’s open and not closed like you think it is. Then that lasted exactly one day and it started reporting unavailable, then magically started reporting fine the next day.

My problem with the platform has always been that it shows you the potential, and it’s like you’re living in the future and everything just works. Then one day some things don’t work. And the next day they do and other things break. Then everything is good for a week or two. Rinse. Repeat.

I’m fairy new here, got the Gen 2 ST hub end of Sept and everything has worked swimmingly up until this morning. I have Samsung ST branded motion and multi sensors, Sylvania (Lightify) RGB strips, Philips Hue (hub + bulbs), and Ecobee 4.

What I’ve seen is all the ST hardware fails, but the Ecobee and Philps Hue maintain availability. ST support had me do the battery reset thing and it works for about 10 min then I see everything returning to crap. Most of the sensors are two weeks old, and one sensor is in the same room as the hub.

Reading though this thread, I’m guessing we are SOL?

In the last week I have had all my devices on a Hue bridge go “Unavailable”. No changes have been made to the Hue Bridge and accessing devices directly through the Hue bridge, bypassing the ST Hub, works fine. ST hub seems to have lost its awareness of the devices on the Hue bridge. Seems to have happened between 12/29 and 12/30/2017. --TGV

Same here. After having my system work well for the past year, I just noticed like 4-5 items go Unavailable. These are GE lightswitches, fan control, etc. What’s going on?!

Major system outage since 4:30a EST

Me too, no zigwee; all powered Zwave… random “device unavailable” sometimes its even the device in the room with the hub! (~10 feet line of sight from Hub to device.)

Nothing else on the hub than a few thermostats and they randomly report unavailable.

I have have this issue too. I looked for a plausible cause but couldn’t find one so I sent a request to tech help and I got this reply: "Dave S. (SmartThings)

Thanks for contacting SmartThings Support.

Sorry to hear you are seeing unavailable devices frequently! I know how concerning that can be.

Thankfully, I believe this to be an issue with Device Health and nothing wrong with your actual devices.

We are working on fixing an issue with Device Health where it will incorrectly mark devices as unavailable. For now, I recommend disabling Device Health and we’ll email you as soon as it is fixed.

If this does not resolve the issue please let me know!"

Update. So turning off device health only seems to mask the problem, no more white circles with red dots…

Today the thermostat in the mobile app the Master bathroom reports that the room is 5 degrees F (-15.5 C)… Which is kinda funny since it is about 40 degrees outside and the room is actually a normal 70 degrees. And the thermostat is working normally.

Curiously if I click on the Thermostat tile and then click on the SmartApps tab and then select one of the actions (I’m Back, Goodbye, Good Night, or Good Morning) and then back out without saving anything or making any changes the mobile App resets and the thermostat starts polling again. So I have figured out a way to fix this remotely and without rebooting the thermostat or the hub… It looks like the polling “health” error occurs when one of the canned Smarthings automation run

So I’m sad to report that turning off device health does not solve the problem it only masks it.

I fixed mine by removing batteries and pulling plug for a minute. Didn’t
come back immediately, but eventually.

I just installed my Smart Things devices this week. I previously used Wemo hub for my smart bulbs. This thing is pretty unreliable. Two outages this week and now all GE smart switches and cree bulbs are offline. Really ticks me off to invest in this technology only to not have it work as expected in the first week of use.

SOLVED (for me at least): A week of the same “Device Unavailable” issue. Moved the SmartThings hub away from my wireless router, to the other side of the house. Devices slowly started to repopulate their “ONLINE” status in the IDE and in the app. This morning, everything is magically working again. Get your hub away from your wireless router. Hope that works for others as well.

SOLVED (for me at least): A week of the same “Device Unavailable” issue. Moved the SmartThings hub away from my wireless router, to the other side of the house. Devices slowly started to repopulate their “ONLINE” status in the IDE and in the app. This morning, everything is magically working again. Get your hub away from your wireless router. Hope that works for others as well.

It’s also possible that just powering off your hub and on again, if it was for more than a few minutes, caused your Zigbee devices to remap anyway. But yes, being near the router can be an issue. I’ve strangely never had this interference problem. My ST hub is 7 inches from my router.

It’s also possible that just powering off your hub and on again, if it was for more than a few minutes, caused your Zigbee devices to remap anyway. But yes, being near the router can be an issue. I’ve strangely never had this interference problem. My ST hub is 7 inches from my router.

Mine is also less than a foot away and has been for a year without interference issues.

Another thing, depending on what gets rebooted and the timing of how long things are powered off, it’s possible that either the ST Zigbee channel on the hub changed upon startup, or rebooting the router changed what channel the 2.4ghz band is on. Troubleshooting these things 1 by 1 to isolate the actual issue can help you prevent these same issues in the future. Otherwise it will always remain a guessing game. Was it my hub distance to router, was it my 2.4ghz channel being on 1 and interfering with neighbors router, was it my Zigbee channel interfering with my wifi 2.4ghz channel (overlap), or did my Hue Bridge channel cause some sort of interference between the other two?

A lot of people, depending on equipment and setup don’t run into these issues, but for those that do experience something like this, troubleshooting all these scenarios is worth trying to track down to prevent it from happening again.

This. The SmartThings hub is a very inexpensive device. Its Zigbee coordinator is pretty limited compared to more expensive devices. As @Mr_Lucky said, it cannot change its Zigbee frequency, either on the fly or as a user request. Whatever it was set to at the factory is what you’re stuck with. So, to be honest, “best practices” from a network engineering standpoint just don’t apply to a device of this type. The best things you can do with a SmartThings hub to limit Wi-Fi interference: A) put your smartthings hub at least 3 m from your Wi-Fi router. Also keep it away from metal. B) whenever possible, put your Wi-Fi traffic on 5 GHz, not 2.4. And choose a 2.4 Wi-Fi channel which is the maximum distance from whatever Zigbee channel your SmartThings hub happens to be on. C…

Just one point on this comment though … see the first point made in the post you linked to:

“The SmartThings hub is a very inexpensive device. Its Zigbee coordinator is pretty limited compared to more expensive devices. As @Mr_Lucky said, it cannot change its Zigbee frequency, either on the fly or as a user request. Whatever it was set to at the factory is what you’re stuck with.”

So, if you want to mess with channels you need to do this on your router.

In my case I have my router channels fixed so it will not change even on a reboot. I am sure I have just gotten lucky with that channel (which I set for other reasons before I used ST) and the channel factory-set on the ST hub.

Ya, I wasn’t insinuating that you could manually change or force the Zigbee channel to change, but I know that mine has changed in the past. Whether this is from firmware upgrades, or from long power outages upon reboot or some other function on the backend that refreshes the channel.

If someone does have channel overlap between the two, you would definitely make a channel change directly on your router with respect to the 2.4ghz channel and separate it as far from where the ST Zigbee channel is set to. (Most people have Auto set for channels on all their bands - hardcoding channel 1 is usually bad as this is typically the most congested channel). 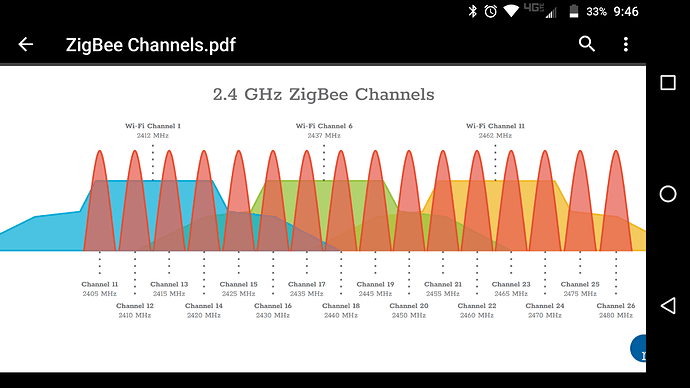 I’ve been having sensors going offline quite a bit since the latest firmware update. Pulling out/putting in the batteries does seem to fix the issue, but seems like it is happening much too frequently now.

Hi, I have only had my ST Hub since the end of December and the ST Motion Sensor very quickly started becoming Unavailable, which was resolvable by refitting the battery, but that is not viable if you are away. Eventually it packed up altogether and I had it replaced by the supplier. The new one started going offline within 2 days. My Door Sensor has also started doing the same thing. I have found the answer… I have already bought a non-Samsung motion sensor and door sensor very cheaply via Amazon from China and they work faultlessly although they do not have the extra functionality i.e. temperature.

Really Appreciating your feedback, it worked for me