I have the smart alarm app installed. I also have auto-mode enabled when i arrive and depart. Just wondering what people are doing for if they have a visitor…is there a custom mode, or solution for this. Don’t want to have to disable the app.

Smart Alarm now supports MiniMote 4-button remote. You can set it up and give it to your guest.

I had this same issue. I solved it with a couple of special virtual switches that I use to establish “presence” of other people in the house. For example, I have one called “Houseguest” – which I (privately) turn on whenever I have a guest in the house, and off again when they leave town.

The “Occupied” mode basically means someone’s is still here, but it’s neither me nor my wife, so:
(a) don’t arm the alarm (“Occupied” is a “disarm” mode in SmartAlarm), and
(b) they probably don’t want all kinds of crazy automation stuff going on in our absence, so most of that stuff is inactive when the house is in “Occupied” mode

When we return, it returns the house from either Away or Occupied back to Home mode.

For those times when I don’t want the house to be disarmed for extended stretches… I have a SmartApp for the Schlage door lock that does a good job turning these presence switches on, depending on whose code unlocks the door.

Departures have been a little trickier though. Along the lines of what geko suggested, I am thinking about using a MiniMote or some other method to let the person let the house know when they have left the house (for real).

So far my “visitors” have mainly been carpenters, so I have been just turning their presence vswitches off according to a fixed schedule, since I know they take off before 6pm. Either way – behind the scenes, this is just a matter of turning off the appropriate virtual “presence” switch.

I like the idea of a simulated presence sensor that you can manually set. Here is where I got the idea from: 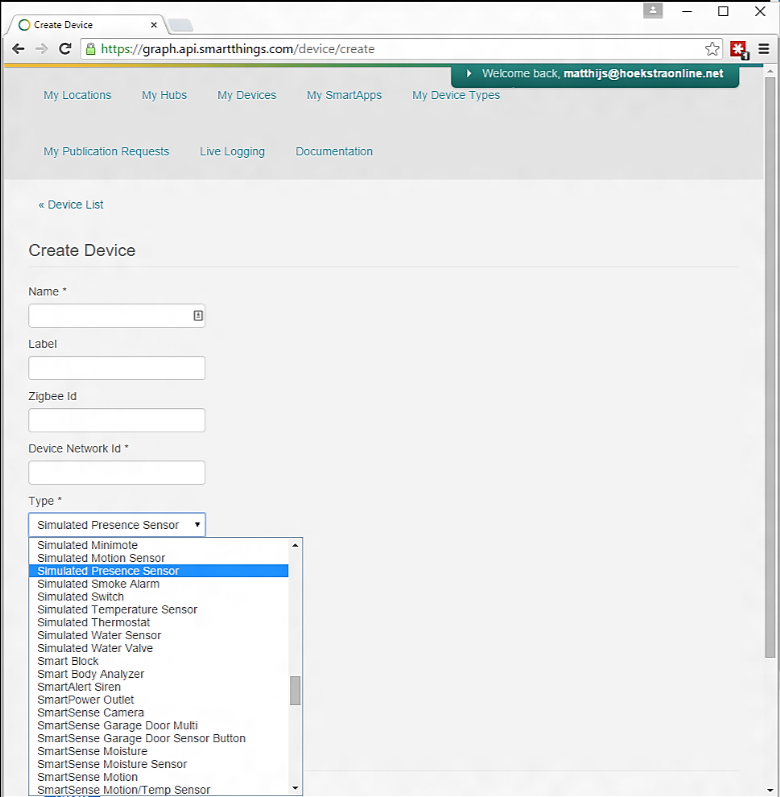 SmartThings, how to handle guests and nanny’s in your house

Using SmartThings lets you automate most of the stuff in your house. Leaving the house automatically turns of all the lights and heating, but only when all of us leave the house. When one of us ret…

Yes, the community is very creative. That particular blog article is from 2015. Since then, other community members have made a number of methods with additional features and enhancements.

With the newer virtual presence sensor that is also a switch you can do all of the same things in the blog article, but you can also turn it off, for example if you all go out to dinner. This allows your regular “away” routines to run when the house is empty.

In the spirit of enhancing the connected world, I decided to release an Improved version of my Switch-Controlled Virtual Presence. It’s a Virtual Device type that presence can be controlled by a virtual switch. So what’s different except for a better name? Responds to “arrived” and “departed” commands. Easily updatable on GitHub. Generally better. GitHub Integration Info: Owner: ajpri Name: VPresPlus Branch: master Manual Install Instructions: Go to the SmartThings IDE Click “Create new device handler” Click the “From Code” tab. Paste the GitHub code linked below. Click Create Click "Publish, then “For me” Go to “My Devices” and create a new device by clicking on “+ New Device” Chose any name you want (Will show as than on app & other ST tools. Choose any Device Network ID you …

Of course, having that device doesn’t obviate the original use case in this thread, which is not just about marking the guest as present, but actually having a different “guest” mode so that routines might run differently. For example, if a guest is visiting you might not want to have your normal “night” routine set off a siren if there is motion in the downstairs hallway.

So both options are useful- – guest mode and virtual presence sensors.

I created a virtual presence switch called Housesitter which avoids putting house in away mode,SHM etc. I turn it on when my in laws watch the kids. I have an iOS widget, Alexa or smarttiles to activate it.