because matter isn’t actually enabled yet on smartthings 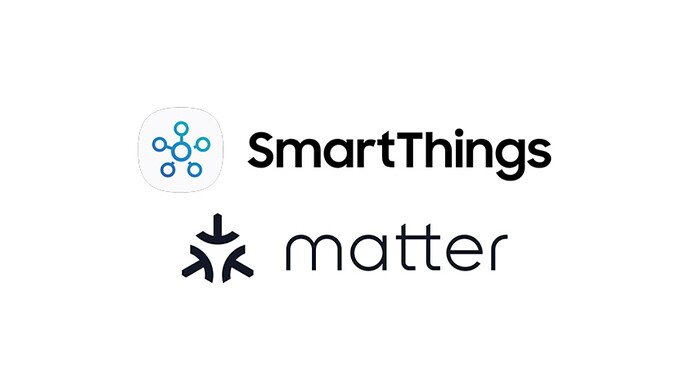 Still no Matter devices to add, though.

how would we know which matter devices are supported in smartthings and which are not.

Its a good question. Are there any matter devices out yet though?

officially live on Android devices as of 2 days ago

It connects with Google Home, and Apple HomeKit on iOS 16,1,

but IT fails during pairing on the ST Android and no Matter option on iOS. hopefully will be fixed soon

OK, but Smartthings is both Thread and Matter certified, so what does that mean wrt Eve products?
I had thought that Thread was a constituent of Matter?

thought that Thread was a constituent of Matter?

Thread is a networking protocol. It existed before Matter. Just like WiFi. It determines the frequency and byte structure of radio messages between devices.

Matter is an application layer. It determines the CONTENT of those messages.

You can send a message that can be understood by a Matter-certified device using any of several network protocols. Right now the most popular are WiFi (high power protocol) and Thread (low power protocol) but they don’t have to be the only ones. And it doesn’t mean that ALL thread devices (or all WiFi devices) will be able to send Matter messages. Just that they could if the device manufacturer designs them to. 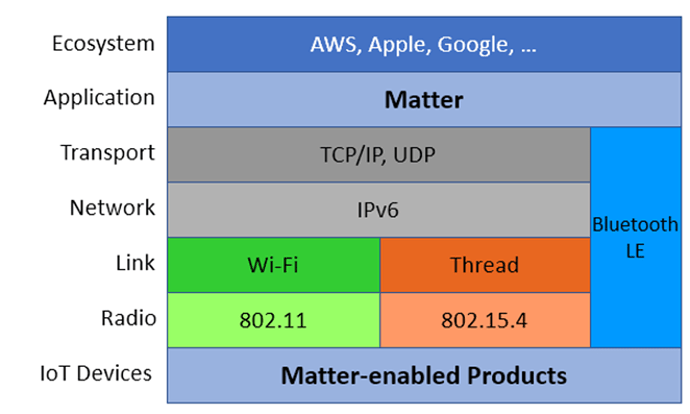 You can think of Thread as a package delivery service like FedEx or a local courier. They tell you what the outside of the package has to conform to. Dimensions. Address label. Package material. They don’t tell you what information the document inside has to contain. That’s where Matter comes in.

With regard to Eve devices, they have said that many of their thread-enabled devices will be able to send Matter-formatted messages, but as @Automated_House said, those are two different certifications. Once Matter is fully supported by both SmartThings and Eve it means you will be able to add Eve devices that are Matter-certified to the SmartThings app as long as you have at least one Thread Border Router (any brand) in your setup.

I really like the following article about Thread and Matter if you want even more details about how Thread differs from Zigbee or zwave with regard to Matter. 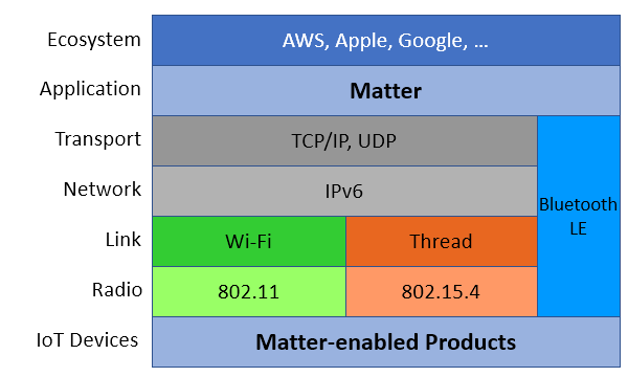 Analyst-in-Residence, Industrial IoT and IoT Technology, Bill Curtis, Dives in as CES 2022 product announcements signal the end of the consumer IoT “connectivity wars” that began over 20 years ago. Today, Bill takes a closer look at Matter and Thread...

This might be the easiest to understand explanation between two networking layers I’ve ever read. As a layman, I get confused all the time, but I think I at least have link and application layers settled.

Thanks again for the thorough answers you provide this community!

I have read on other ST forums that they now have Matter updated on their Aeotech V3 hubs. I have this hub as well but still no Matter update and still running version 45.00009. Did I somehow miss the auto update or ST just hasn’t got to me yet (US)?

You already have matter support on 45.9. You can see the matter logo under hub details in android app but not iOS app.

I use iOS devices so can’t see it. Thanks for the explanation.

You will have a driver option when a device is using an edge driver. You can also find all edge drivers and channels you have under hub>options>driver.

Users can also onboard non-certified Matter devices, they will get a pop up asking them if they’d like to proceed with that device.

@Kianoosh_Karami if you can answer any of these, i’d be grateful: