On the Lutron twitter page theres a picture of their table with a Smartthings hub on it. Has anyone here heard anything on potential intergration?

We had a great time kicking off #CES2017 @CES Unveiled last night. Stay tuned for some great #Lutron announcements this week. #smarthomes https://t.co/PuqwX80lIX 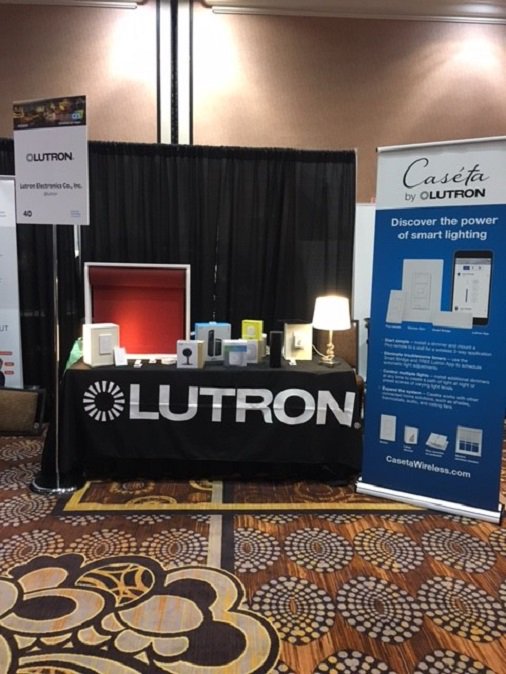 Lutron gear will soon work with SmartThings and the Nest Cam

The veteran smart lighting maker plans to sync up with Samsung's connected home platform in 2017. You'll also be able to set your lights to come on whenever the Nest Cam detects motion.

Can you say anything?

This would be awesome!

Samsung and vaporware… How dare you insinuate such a thing

Based on the CNET article, this looks similar to the official SmartThings/Hue integration. You need to buy the Lutron SmartBridge device to make it work, but that’s not a bad thing as it also gives you a IFTTT and echo integration.

This is excellent news. Not only does Lutron make very good switches, since they don’t require a neutral wire at the switchbox, it makes for easy retrofit in many older homes.

will we finally get the ceiling fan control we always wanted?

/me goes and looks live chicken, unicorn hair, and a virgin’s tear needed for spell

Good catch - I’d probably by a Lutron hub just for that.

Any one know of a compatible fan/light combo unit that will work with Lutron ? tired of waiting for the Hampton bay Zigbee module…

If anyone doesn’t understand why this is all so exciting, check out the Pico remotes. They work great as portable button controllers or as wall switches, and since they are battery operated, you can mount them anywhere.

If anyone doesn’t understand why this is all so exciting, check out the Pico remotes. They work great as portable button controllers or as wall switches, and since they are battery operated, you can mount them anywhere.

Pure speculation, but if this works the way the official SmartThings/Hue integration works, it’s LAN integration, not cloud to cloud. And there’s no reason why it shouldn’t work that way, that’s the way almost all third-party integrations work with Lutron, IFTTT is the exception.

This is a Cloud to Cloud integration.

Since @tyler says it’s cloud to cloud, I’d expect about the same lag as for IFTTT, although again it may vary from house to house.

Not surprised it is cloud to cloud since in order for it to be LAN it would require ssh or telnet (thus potentially pro hub only). Since ST doesn’t support SSH or telnet it is the only option unless Lutron created some other sort of API for their hubs (I wish!). I could be wrong of course, but I would think the lag won’t be too terrible and should be better than IFTT. Using the Lutron app which then goes to the Lutron cloud responsiveness is pretty good. They use an MQTT type of service which is pretty fast. I would imagine this will basically do the same thing.

That being said, it likely won’t be as fast as LAN connections, and I would be surprised to see some of the other fancier options like triggering scenes, using PICO remotes as controllers for ST, or adjusting ramp rates which I am able to do with my integration. Either way though I am glad to see it happen and hope they surprise us.

The Lutron people said “end of January or February” when I asked them. Also, it seems that they are not very interested in those ZigBee Picos anymore. Bummer!

Is this worth waiting for if I’m in the market to purchase switches? I’ve already bought a few Leviton Vizia RF+ switches and dimmers, and the instant update and ability to do direct association for virtual 3-ways is important to me. I have used Picos as part of an older line of Lutron RF products and like them a lot, but I’m not familiar with the Casetas and the features they offer.

I guess I’m just wondering if Lutron offers something that’s far better than any of the current Z-wave switches out there and if the ST integration will be less than stellar when it comes to speed and lag.

Is this worth waiting for if I’m in the market to purchase switches? I’ve already bought a few Leviton Vizia RF+ switches and dimmers, and the instant update and ability to do direct association for virtual 3-ways is important to me. I have used Picos as part of an older line of Lutron RF products and like them a lot, but I’m not familiar with the Casetas and the features they offer.

I guess I’m just wondering if Lutron offers something that’s far better than any of the current Z-wave switches out there and if the ST integration will be less than stellar when it comes to speed and lag.

Different things work for different people. It’s a personal decision. Lutron devices are very well engineered (they’re an engineering company devoted to lighting and hold a lot of patents). When compared to Z wave switches, their 3 biggest advantages are:

(The exception is the fibaro dimmer module, but the wiring is more complex, three and four ways can get really complex, unless you also replace the switch it doesn’t work quite the way people expect, and there isn’t always room in the switchbox for it. So the fibaro is a good solution for many people, but just not quite as mass-market as the Lutron design.)

The dimming feature is also super obvious on a Caseta switch, even for visitors. Most zwave switches look like either a toggle or a rocker, and you have to know that you can either tap multiple times or hold and press to get the dimming. It’s easy once you’re used to it, but not always intuitive for guests.

Which leads to one more minor advantage: the Caseta line is also available in black. Most of the zwave brands are not, although Cooper and GE are. Most people don’t care, but it’s important to some.

And one more minor advantage: the Caseta switches also work with HomeKit. None of the Z wave switches do. Again, won’t matter to most people, but to some it’s a definite plus, particularly those with Apple Watches.

So put all of that together, and I would say that if you don’t have a neutral wire at the switchbox, it’s definitely worth waiting if you like the other features of the Lutron. But if you’re not facing a challenging retrofit situation, and there’s a Z wave switch you like now, and you don’t need HomeKit compatibility, then there’s probably no reason to wait.

@JDRoberts I was initially super excited for this, however I have a thought/question that maybe you would know.

I have a mix of Z-Wave switches and Hue bulbs for my lighting. Where I use Hue bulbs, I wire the switches to always on and use the Hue Dimmer switch for control. In the end, it looks good but it is another layer of complexity when configuring lights.

Now, I’m guessing if I use a Lutron switch to control a Hue bulb, I’m faced with the age old problem where the bulbs will not respond to commands unless the light switch is on, and on top of that, when turning on the switch, the bubl defaults to soft white.

However…leveraging HomeKit, since both Hue and Caseta are HomeKit capable, do you think it’s possible to program the Caseta switches to control a scene, when wired to control Hue lights? This way the switch completes the circuit, turns the hue bulb to soft white, but then HomeKit kicks in, seeing the switch turning on, and activating a scene which includes setting the color of the hue bulb.

Or is that farfetched?

I’m trying to figure out, when this comes to fruition, do I leave things the way they are, or do I migrate ALL switches to Caseta and re-wire the lights the proper way. The biggest issue is I hate soft white and use a custom white light on all my Hue Bulbs. Decisions, decisions.

It’s a complex question. But the first thing is you shouldn’t be cutting power completely to a smart bulb on a frequent basis – – you can significantly shorten the radio life in the bulb because of the impact of inrush current. These bulbs are intended to always be on power and control their own power draw. So the Lutron switches are not going to help the situation in that regard.

That said, as long as the bulbs always have power, you can definitely have a Lutron switch coming on trigger a HomeKit scene which includes the bulbs.

Another option which might fit you use case depending on the exact details is that with iOS 10.2 you can now use the pico remote to trigger HomeKit scenes. That makes a very nice non load control wall switch as well, and doesn’t require any wiring.

I don’t know if the SmartThings/Lutron implementation Will send pico button presses to SmartThings (the IFTTT Lutron channel does not, but several other integrations do). But it should definitely work through HomeKit.