I have been playing with various models of Zwave SmartLocks (Kwikset). For the most part, they work well. Occasionally, they will go into “unknown” state in the ST Smart Lock app. Once this happens, they show as “unlocked” in the ST device screen even if locked. Control of the locks does not work at this point. Manually moving the locking bolt with cause the status to update and everything is fine at that point. Happens about 1-2 a day while I have been testing them out. Ideas?

How far is the closest beaming repeater from the lock that is not updating status? And did you run a Z wave repair after you added the new locks to your network?

FAQ: why would I need another beaming repeater if my zwave lock is already close to my hub?

If you read the FAQ I linked to above, you will see the distance from the hub is not the issue with lock status. You often need to add a beaming repeater close to the lock even for a lock which is already close to the hub.

20 feet from the wall switches is too far for this particular issue. The lock will choose one very close (10 feet or less) beaming repeater to act as its “answering service“. Again, this is all covered in the FAQ.

FAQ: why would I need another beaming repeater if my zwave lock is already close to my hub?

The benefit of this technology is that you get much longer lasting batterylife for the locks while also getting quick response time.

I did take a look at it. Thanks for the link. I was just replying with my setup in case someone else sees something similar. I’ll try putting an in wall switch next to the door lock (1 ft) and see if it resolves itself.

One interesting note on the troublemaker lock is that it is routing itself away from the hub, chasing a repeater (smart plug) that is far away and running around the house back to the hub through switches.

I’m having the same issue with a kwikset 916. My lock is about 4 feet from z wave wall switch and it is about 15 feet to the hub. Path shows lock->wall switch->hub. I removed it and laid it on my desk. I did a z wave repair and the path updated and routed through a different z wave repeater, lock->sofa lamp->hub but the unknown status still happens after about an hour after unlocking and locking.

Would resetting the lock and reconnecting using zigbee make a difference or is it the lock itself the issue?

Would resetting the lock and reconnecting using zigbee make a difference or is it the lock itself the issue?

if it is z-wave lock, you will not be able pair it as zigbee.

first question… are you certain the batteries in the lock do not need replacing?

if the batteries are ok… remove the lock, run z-wave repair and ensure no errors are reported. reboot hub and add the lock.

but @RBoy is the lock expert

Unknown status isn’t related to the buffering devices/repeaters (those come into play is the status doesn’t update, there are delayed responses, no responses, programming issues, missing notifications etc).

When a lock reports unknown status it’s an intentional response sent by the lock. That usually means a couple of things:

The lock is laying on my desk so nothing is scraping or binding.

Guess it needs to be replaced.

the kiwkset 916 is both z wave and zigbee.

The kwikset 916 is EITHER zwave or Zigbee. Not both in the same physical device. They have different radios inside.

There will be a suffix on the model number that tells you which radio it has. 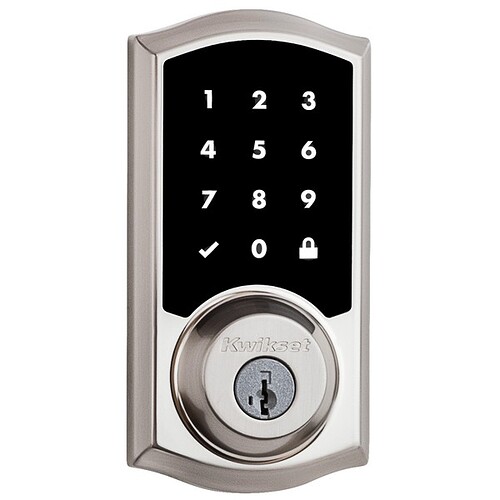 You can confirm this with Kwikset support.

Most Yale smart locks are designed with interchangeable radio modules so that end consumers can swap one for the other. And that’s pretty easy, basically the same as changing batteries.

Kwikset locks are not intended to allow end purchaser swaps. It’s possible if you can find a different radio module to purchase and you’re willing to do the replacement, but it’s not easy.

And even then, it’s not both Zigbee and Z wave in the same device, it’s just changing from one to the other.