Leviton, Lutron, and IFTTT- Oh my! (My dilemma)

I’ve got a dilemma. Although I have a couple dozen smart devices in our home you’ll have to forgive my still fairly basic grasp on smart home networking. AKA, I haven’t a clue what the word “handler” means in terms of networking. I have booth Google Home Display (Nest) and Alexa (Echo show) sitting right next to each (other which gets comical at times).

So far all my outdoor lights (less ONE) work on Lutron. I like this because I want a single Pico that will light them all up. We live out in the country so its helpful.

The walk out entrance flood light does not like Lutron. It’s not so much the “Lutron” as it is the “dimmer” aspect of Lutron and this flood light aren’t copacetic. The Leviton works just fine. The Lutron Pico I want to use sits on our first floor while the Leviton (and walk out flood light) are in the basement. I want to set up an IFTTT that will trigger the Leviton upon use of the Pico upstairs. The issue is, while I can get Lutron to be an action for Leviton, I can’t do it the other way around. In IFTTT I cant’ find “Lutron” (or Ra2) as a trigger!

Suggestion? Backup plan will be to buy Lutron’s non-dimmer switch.

Honestly the easiest thing is just to get the Lutron no dimmer switch.

I just did exactly this for our side yard porch light because we replaced the light from a very old incandescent to a new sealed LED nondimmable device. And while the old fixture worked just fine with a Lutron Caseta dimmer switch, The new one went bananas. But I really liked the look of the new one, so we just swapped out the switch and everything, including the picos, works great.

This is the new switch: 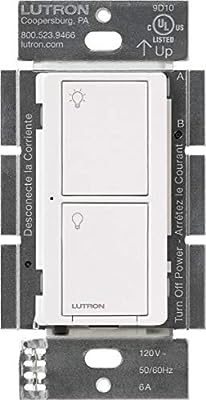 Otherwise, you have a set up which will require multiple clouds, introducing both latency and unreliability. And it won’t work if your Internet goes out, which I personally would consider a safety issue for outdoor lights.

Ya know that’s a good point @JDRoberts (the safety piece). The IFTTT creates a lag (which I knew). That side of the yard isn’t quite as important safety wise but it would still be annoying. I just wasn’t sure if I was missing something with the whole “one way” trigger availability on IFTTT. It didn’t make sense that Lutron could only be the action and Leviton both an action or a trigger.

You were the one who sort of pointed me on to Lutron and I have absolutely loved them. As with most their biggest drawback is cost. They’re a bit overkill for scenarios that just don’t need a 3-way with pico. That’s actually been an issue. I can’t use Lutron dimmers on 3-ways without using a pico. In most scenarios in my home I don’t “need” a pico as I’ll just try to use a smart switch and the 2nd “dumb” switch. As best I can tell, though, Lutron’s instructions don’t provide an option for powering that traveler wire and having the two work in tandem (dumb switch and Lutron dimmer). I wondered if it would work if the “dumb” switch were a dumb dimmer but so far I think my research has stated otherwise. I know its way overkill to use the Lutron in this scenario but I have them sooooooo I might as well use them. I end up having to switch the “dumb” switch to a Pico, though.

I do believe the switch you referenced above will allow for a “manual” (as Lutron puts it) second switch on a 3-way.

GE is my least favorite as pairing without a hub is cumbersome and the GE’s seem to go offline more than any of my others. Granted I’ve only toyed around with the TP Link for a couple weeks.