So after kicking the idea around for a few weeks, I finally went to order the ADT product line today. Since Samsung won’t sell additional sensors, I pulled it up at Best Buy.

I would assume if they still intended to sell it, they would let you back order it.

Looking at Amazon, prices aren’t as low on everything, but they are close. The expansion pack is priced the same… the starter kit is $50 less than Samsung direct.

Coming off the Lowes Iris shutdown, seeing Best Buy & Amazon basically clearing out and eliminating SmartThings ADT from their store does not inspire confidence in spending money and time to make the jump over to it.

Samsung will never say, but I think you have a valid concern.

Agreed about the concern. And while it could be under non-disclosure, I haven’t seen anything in upcoming FCC announcements about new models for this line.

Seems like ADT might be moving in a different direction for DIY… or just adding to their portfolio. Who knows. But the fact that even Samsung stopped carrying the sensors for the platform does not inspire confidence

please read this post as well: Why discontinuing ADT/smartthings is not the end of the world

Yikes! OK, that definitely makes it sound like the ADT/smartthings line is dead, at least from the ADT side.

”We are confident that LifeShield’s capabilities and approach, combined with the brand and scale of ADT, will create an opportunity for us to offer our services to a broader cross-section of U.S. households. Together with LifeShield, we will be positioned to offer more solutions to a broader base of customers and create increased value for our shareholders as we seek to grow profitability through expanded, yet focused offerings.”
.
“This combination unites the passion and commitment of two organizations that are focused on security,” added Mike Hagan, LifeShield Chairman, who will continue as an advisor. “Leveraging ADT’s significant experience integrating products, we look forward to working together to ensure a seamless transition and capitalize on the attractive market opportunities in the DIY segment. Together we will continue to advance our strategy to deliver the best security solutions to our customers at every stage of their lives.”
.
Blake Kozak, Principal Analyst for Smart Home and Security Technology at IHS Markit, says ADT’s purchase of LifeShield demonstrates the need for industry firms to have a diversified approach to home security and monitoring.
.
“Although ADT and SmartThings had partnered for a starter kit capable of being professionally monitored, reception of this product has been modest at best, with heavy price reductions since the holiday shopping season of 2018,” he says.

LifeShield’s professional grade and professionally monitored wireless home security system features an easy to set up “plug and protect” process. LifeShield was acquired by an affiliate of Hawk Capital Partners LP in 2017.

Lifeshield has the same set up as ADT: proprietary protocol for the security devices and zwave plus for the home automation. It also has integrated Wi-Fi cameras and an IFTTT channel.

Home automation control to lock your doors, turn on your lights, adjust your thermostat and more!

Between that and their new smart home solution, I’d say she’s dead Jim. They even bought super bowl air time and partnered with the Scott brothers to promote their new system. (Never saw any advertising for the ST/ADT combo)

CES 2019 promises no shortage of big news and leading security system provider ADT is joining the show with a newly redesigned smart home security system that could potentially double as a smart home device hub and includes an all-in-one mobile...

Yea… that does make it interesting. What really stinks is that there is nothing about the ADT Smartthings panel other then the lack of desire to allow more official integration functions that really hurts it. It is just as capable as any Smartthings Hub. What will be interesting is if ADT pulled monitoring from it. If they really decide to kill the product is one thing. If they stop it from working is a whole other issue. The ADT side of the system is dependent on the ADT canopy system. Time change so if they move to something else that is fine as long as I can continue to use it as it is now. Some may not agree, but that is how tech goes. We can’t expect to buy something and it run forever.

The lifeshield hub already supports Zwave S2 security and “ smartstart” provisioning. Hence their “plug and protect” slogan. It’s not quite that simple, but it’s definitely easier. 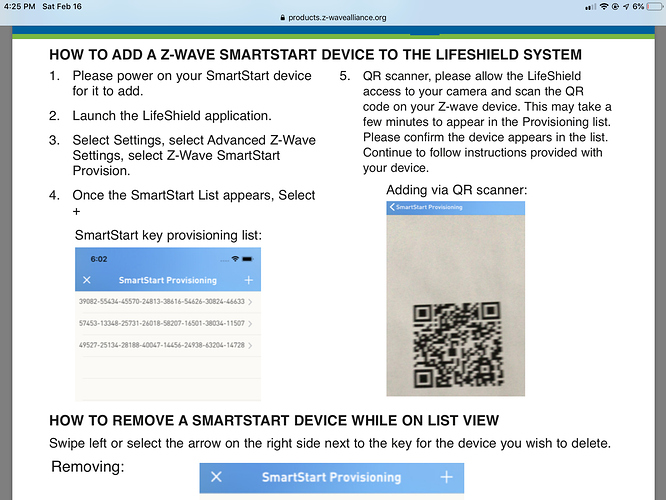 Yea… that does make it interesting. What really stinks is that there is nothing about the ADT Smartthings panel other then the lack of desire to allow more official integration functions that really hurts it.

I would have to respectfully disagree on this point. The fact that it doesn’t support Zwave S2 means it cannot be UL listed as a security device for the home automation side. It has some technical weaknesses in its current form particularly for a security system. I’d suspect that’s one reason they went to the proprietary protocol for the ADT specific functions.

And, yes, this really sucks for the Iris refugees who just decided on an ADT model SmartThings hub.

Technically can’t call it dead until they pull this site

Check in on your home anytime with home security systems that you can view from your smartphone. Set up motion and audio alerts so you don’t miss a thing.

Glad I held off to make my decision on where to jump, I still have a month left…
Now, do I get a regular SmartThings hub or wait to see if Samsung has an official response. Its likely they knew for a while the product was going to be terminated.

Regarding Z-wave S2, are you saying the current Samsung hubs don’t support it and its a physical hardware change needed for it?

Current hubs do not support it, but the beta going on right now is adding it from the hub side. Needs app updates in order to totally enable it. And that’s not to say they won’t also add it to the ADT hub, even if it is cancelled. But a company updating a product they don’t sell any more is kinda a pipe dream imo.

One other thing to consider is that they cancelled the rollout of the ADT hub in the UK. They had a Samsung page live for it with coming soon and eventually pulled it down without anything being sold over there.

One other thing to consider is that they cancelled the rollout of the ADT hub in the UK. They had a Samsung page live for it with coming soon and eventually pulled it down without anything being sold over there.

Yeah, but I would guess that one was more related to the Vodafone security package deal that Samsung made for smartthings in Europe. Because that package is also available in the UK:

Our exclusive partnership with Samsung opens up the exciting world of the smart home with our co-created Safety Starter Kit powered by the Samsung SmartThings hub and app.

Oh ok, so buying a 2018 SmartThings hub, they would be software upgradable to support S2. I feel like i should wait until the last possible moment to swap out my IRIS hub to see if they release something new for security monitoring.

This is clearly a moment of transition in the smart home industry.
Necessary I guess, but insecure for many of us.

Oh ok, so buying a 2018 SmartThings hub, they would be software upgradable to support S2.

Maybe, but they haven’t done it yet. They were given a waiver when they released the 2018 hub because everything released in 2018 was supposed to support S2 according to the spec and their hub didn’t.

Never make any home automation plans based on what any company says it intends to do in the future. Only buy it based on what it does today.

And, yes, this really sucks for the Iris refugees who just decided on an ADT model SmartThings hub.

Was just thinking as I read this thread that if this announcement was made a year ago and they had an offering up and running by now, they probably could have captured a good chunk of Iris users. I can’t imagine those folks will want to wait for the new ADT/Lifeshield system but I guess nobody who was on the fence will be going ADT/ST now. Sucky timing for them.

Never make any home automation plans based on what any company says it intends to do in the future.

Including elimination of the Classic app.

I’ve seen some Iris refugees saying they only want to use solutions that are available in the new app since Classic is going away but IMO that’s so far off that it isn’t worth hamstringing yourself over in the meantime.