The one I’ve found that looks the best so far has been the Ubiquiti mPower Pro: https://www.amazon.com/Ubiquiti-Networks-mPower-Pro-External-Control/dp/B00HXT8IN2

But according to some info in this blog: https://tinkertry.com/ubiquiti-mpower-pro-8-port-outlet-measures-watts the product has both hardware and software shortcomings, and will be abandoned at some point.

Is there a really good IOT surge protector out there for a good price? Someone mentions Wattbox at the above blog, but their products are very expensive. Ubiquiti is generally known for making solid enterprise IT products at a very competitive price-point. 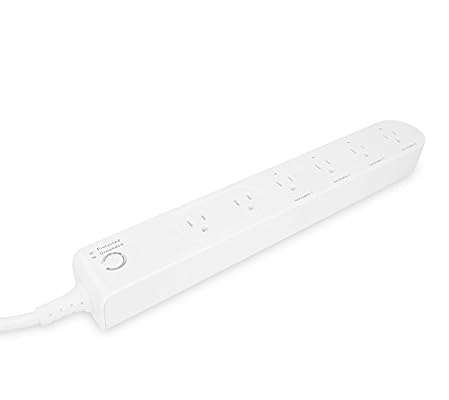 The Aeon labs smart powerstrip is a high-quality Z-Wave power board which can report immediate wattage consumption or kWh energy usage over a period of time. The powerstrip can be controlled by other ...

Both allow for control of individual outlets on the strip

Thanks, but the the Aeotec product has some bad reviews, so I feel like I should pass on that one, and neither product seems to offer surge protection, unless I’m missing something.

I wish Ubiquiti would fix their products and re-release them, if there’s no decent competitor out there.

I don’t think there really are any z-wave or zigbee power strips generally available that have enterprise level surge protection.

Thanks, I’d be willing to consider any remote control protocol as long as the product’s solid. It seems like Ubiquiti uses their own mFi protocol.

I’ve read that series-mode surge protection is supposed to be best, but I don’t want to spend that kind of money. Tripp Lite does offer insurance, and I’ve read some accounts where users were reimbursed for damages, even if it’s hard to get them to cough up the dough when their products fail to protect devices.

Edit: I found out the mPower devices have no surge protection. I’m wondering if the only current options would be to install a smart power switch before the surge protector, but then you wouldn’t have control over the individual outlets. Or you could buy several switches and plug them into the surge protector. That would be pricey though.

Keep in mind that most power surge strips include everything (plugs, coax, telephone, ethernet, etc.) in their power surge rating and dont break it down.

Hopefully if I were to have a problem, “god” forbid, I’d successfully be able to get reimbursed.