I'm looking for the manual, DTH or pairing instructions for a Haozee Door Sensor NAS-DS07Z

I am almost done migrating from Wink to ST Hurray! I have a door sensor made by Haozee NAS-DS07Z unfortunately I can’t find the manual anywhere for this device; even google searches come up dry. I’m hoping someone in this awesome community has the manual or can share how to exclude\include this sensor in ST. 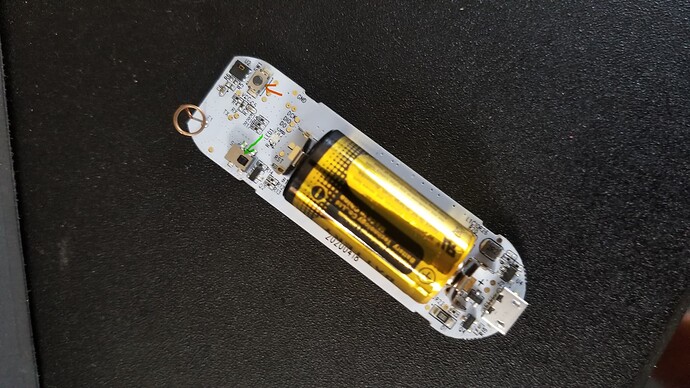 20220729_0815041920×1080 236 KB
. I’ve tried multiple press patterns to get this thing into pairing mode and nothing works. I’ve tried single press, triple press, hold button for 10 seconds to reset, etc… all ways the work for similar sensors but nothing works. Any help or advise you can provide would be helpful. And yes I have tried contacting the Amazon seller as well as Haozee and received no response.

Luckily the rest of my smart devices are major brands so I’ve been able to pair them normally or found DTH here for them. This is an awesome community and I’m enjoying my ST experience… well except for the day long outage yesterday. I hope this doesn’t happen often with ST, I don’t want to have to move to Hubitat… not yet anyway.

How about removing the battery, then hold down the button while reinserting the battery until a change in LED color or blinking happens?

Yep tried that too. I didn’t list every pattern I tried so as not to bore the group but I’ll try any suggestions. It has an RGB LED so different press\hold patterns return different light and color on\patterns. I’m sure they all mean different things but since I can’t find the manual I have no clue what the patterns mean or what mode it’s in.

Does it have an FCC license number? You can find the manual that way. But that’s only required if it was offered for sale in the US.

There is no FCC number on it. I only see this number and it returns nothing when doing a Gsearch.
NAS-DSO771U V3
20200418 (I assume this is manufacturing date)

There is a Neo Coolcam with the same model number. However they seem to use the familiar inclusion procedure of putting the hub into pairing mode and then pressing the button on the device three times quickly.

Just realized it’s zwave, not Zigbee. In that case you can find the information at the Zwave Alliance site.

In this particular case, since Haozee doesn’t actually manufacture anything, I’m guessing it’s a rebadged Coolcam, since they use that model number.

The 7 series is their newest model: I thought it was only available in Europe, but maybe Haozee got an early release.

First do a factory reset by holding the button down for a full 10 seconds.

Then do a normal general exclude from the ST hub. This time,

Press the button three times within 1.5 seconds, the device will enter exclusion mode.

After it excludes, you do the same triple press when you include and you should see the LED blink 5 times.

Worth a try, anyway.

Thank you for those steps, I have actually tried that many times since I found that the Coolcam sensor looked the same. Each button press of the triple press flashes the light green but I never get the 5 blinks and my hub never shows it was excluded.

The triple tap for inclusion also does nothing other than flash the green light after every push. I am pressing the code button.

When I perform the same steps with the tamper switch a get a blue flash with each press then 9 red flashes but the hub still doesn’t show a message that it was excluded.

Inclusion steps do nothing after completing the reset and exclusion steps either. I’m doing all of this 2 inches from the hub.

I found that the Coolcam sensor looked the same

Many devices manufactured in Chinese factories for different brands will have identical outer cases, so you can’t go by that. It’s the firmware that matters. But in this case, since Haozee isn’t itself a manufacturer (you can see they have no entries at the official Zwave site), we know that the original equipment manufacturer (OEM) has to be a different company. Still, the firmware could be different. I know it’s very frustrating.

There’s no FCC number under the batteries? It’s illegal to sell a zwave device in the US without an FCC certification, so it should be there somewhere.

Did you buy it from Amazon? Is the link still active?

Thank you for that clarification. I’ll check the casing for an FCC number and post it if I find one. There isn’t one anywhere on the board. Yes, I bought on amazon but it is no longer available for sale shocker;( https://www.amazon.com/gp/product/B0923ZFHB2/ref=ask_ql_qh_dp_hza

You are probably correct that the firmware is different. They went crazy with flashing patterns and colors. I’ve performed clicks while holding\not holding the tamper switch and tapping the code switch. Removing the battery then tapping, I’ve tried every iteration I’ve found for multiple vendors but haven’t found one that actually works beyond making pretty multiple color light patterns to appear. It looks like the only option is to get the official manual for this sensor. I’m trying to find a way to contact vendor via Amazon, but as we all know Amazon makes it nearly impossible to message these people directly.

I did some additional testing with this sensor and got it to pair using the following steps:

Inclusion:
Put ST hub into scan mode
Hold down the code button for 5 seconds till light turns white, let go of button and light starts flashing blue
ST will ask for the S2 code (on the bottom of the casing)

Device is included as a motion sensor with temp. I logged into the IDE and changed the DTH to Z-Wave Door/Temp Sensor which works perfectly.

Thank you for all of your comments, I hope these steps help someone else trying to pair this sensor.