Hello I just bought the motion sensor from IKEA and it was added to my ST account in a blink but with a constant “no motion”… i squeezed my brain so much with no hope, searched the forum where i found bunch of stuff but no clear answer, i tried pairing 7 times with no hope, always getting placeholder TYPE…
tried changing to IKEA motion sensor and to a bunch of other DTH and none worked, could anyone please help or clarify which DTH is working or if there is a custom one?

As a DTH it should be the Ikea Motion Sensor but if it had a Placeholder type that suggests it has been installed with an Edge driver, and if it is showing ‘no motion’ then it must be quite a sensible one. Do you have any beta Edge drivers installed?

What device name was it given when it paired? That is often a clue.

There is a Day/Night button on the sensor that toggles between all day and night only control of lights and it is easily pressed. However I am not sure if that affects motion reporting to SmartThings or just directly paired devices. 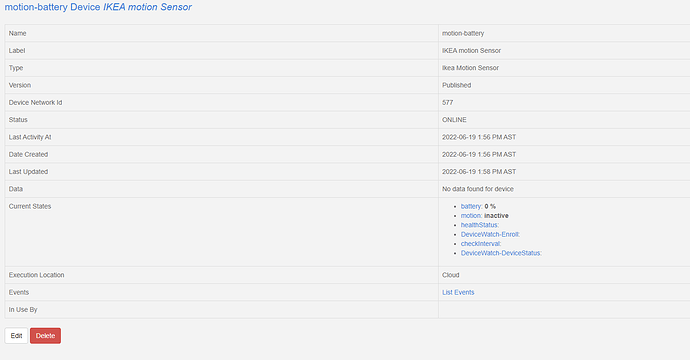 before and after changing to ikea motion sensor device type

ST is in the process of moving from the groovy device types to Edge Drivers. In IDE in the first image you posted, the type will display as Placeholder which means it is using an Edge Driver. Right now, some Edge drivers are available when you pair a device. When it is paired using an Edge driver, you should not switch it to a groovy device handler as it will not work. To fix it, you will need to remove it and pair it again.

SmartThings is in the middle of a transition to a completely new architecture, part of which is called Edge. The Samsung-hosted free groovy cloud will go away. For hub-connected devices, including Zwave and Zigbee, the DTH replacement will be Edge Drivers, which are written in the Lua programming language and will run locally on your own hub. Here are the official announcements: Announcement | Changes to our Legacy SmartThings Platform . Announcement | SmartThings Edge for Devices and Automations Edge is still in beta and they missed their target transition date from the first announcement so no official timeline details at the moment but they are starting to roll out some Edge Drivers. You can find a list of community-created Edge Drivers in the quick browse lists in the community-…

I tried removing and pairing around 20 times so far… no solution around it?

It is clear from the device name ‘motion-battery’, and the placeholder device type seen from the IDE, that an Edge driver is being used. This is puzzling as there is no evidence of that being one of the devices that has been released into production, which would suggest you either have a beta release, or a community written version, of the driver installed. However you’d know if you had done that.

If you find the entry for your device and your hub in the mobile app, open the detail pages and then look in the settings, you should see a Driver menu in each case. It would be interesting to know what it says in there in both instances.

I hope u meant one of those. Im a big newbie btw, so go easy on me xD

I hope u meant one of those. Im a big newbie btw, so go easy on me xD

I meant the second one. Unfortunately the Description, Developer and Support information fields aren’t yet populated, but the version number is that of the latest stock Zigbee Motion Sensor driver.

You’ll will find that your hub is also listed as a ‘device’ in the app and that will also have a Driver entry. That one will look slightly different as it shows the ‘channels’ your hub is enrolled in, and a list of all the Edge drivers that are installed on your hub.

Apart from the slight mystery of how you came to be using the Edge driver, there is the issue of why it doesn’t seem to be working for you. I use Ikea Motion Sensors and the stock driver does work, though it does flag the device offline if there are significant periods of inactivity. It’s been like that since the driver was introduced several months ago but hopefully it will be resolved eventually. Usually it goes back online with activity but I’ve had a couple that have stayed offline in the last few days.

I had to pair my Ikea motion sensors right next to the hub to get them working properly.

i will sure try that when i get home today

Nothing worked so far. Is there a way to remove the edge driver? @orangebucket @Paul_Oliver @jkp

I use the Zigbee Motion Sensor Mc (Edge driver) from @Mariano_Colmenarejo for my IKEA motion sensor. Give it a try.

Updated list of Edge Drivers published in my channel (Feb/2) (New RELEASE) New Edge Drive Zigbee Light Multifunction Mc: This Driver has all the functions of the Zigbee Level ColorTemp Bulb Mc driver, which it replaces and will not be updated any more. Added Color Control Capability with profiles for RGB and RGBW with 2700k-6500k Color temperature. Thanks to the suggestion and collaboration to do the tests for @milandjurovic71 Works with lights, led strips with profiles : Switch & Level Switch, Level & ColorTemperature Switch, Level, RGB, RGBW, RGBCCT, CCT Could work with zigbee single dimmers, but not tested Included Devices : See this link https://community.smartthings.com/t/new-release-beta-edge-driver-zigbee-light-multifunction-mc/234387?u=mariano_colmenarejo Zigbee …

once you subscribe to his channel and enroll the Driver, you can select it in the App for the motion sensor.

Thanks for the tip. Done it, and same issue persists no motion at all times until it goes offline

I am having the same problem with the IKEA E1745 motion sensor. I paired it with my V2 ST hub and I can see the battery as well as motion status. The motion sensor never changes from the state of No motion.
Driver Name: Zigbee Motion Sensor
Version: 2022-11-08-T22:02:20.188166891
When I attempt Select Different Driver button, no results found

Have you found a solution for the motion detection issue?

It’s in my box of unused stuff now sadly